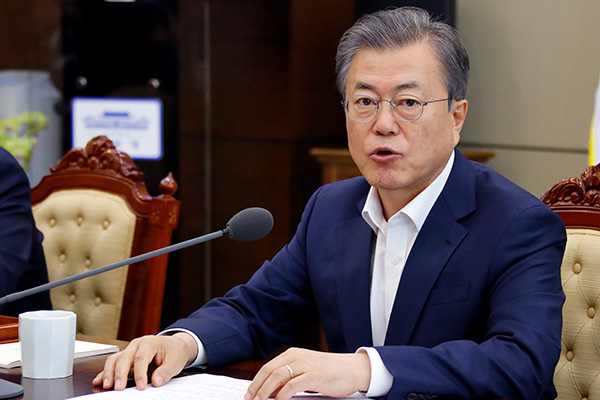 South Korean President Moon Jae-in has proposed a fourth summit with North Korean leader Kim Jong-un. The offer came on Monday, April 15, after Moon’s summit with U.S. President Donald Trump and Kim’s speech at a key parliamentary meeting last week. It is uncertain whether North Korea, which has delivered harsh rhetoric toward Seoul as of late, will accept Moon’s proposal. With more, here is Cho Sung-ryul, a researcher at the Institute for National Security Strategy.

South Korea and the U.S. have made efforts to keep denuclearization talks afloat since the second North Korea-U.S. summit collapsed in Hanoi in late February. This was illustrated during the summit between Moon and Trump last week, when they agreed on North Korea’s denuclearization and the need to maintain momentum for North Korea-U.S. dialogue. Moon also paid close attention to Kim Jong-un’s speech to the Supreme People’s Assembly last week as well.

And earlier this week, Moon said that he hopes to meet again with Kim. The offer for what would be their fourth meeting is seen as part of Moon’s efforts to revive momentum for the stalled denuclearization negotiations and facilitate a third summit between Kim and Trump.

During his summit with Trump in Washington D.C. on April 11, Moon expressed his desire for another inter-Korean summit. Four days later, he reaffirmed this view in a meeting with senior secretaries and aides at the presidential office in Seoul. He said that the venue and format of his fourth summit with Kim does not matter, so long as he can hold substantial discussions on denuclearization.

As of yet, North Korea has yet to agree to a fourth summit. On the contrary, Kim Jong-un demanded that South Korea stop acting as an “officious mediator” in the peace process when he delivered his April 12th speech to the Supreme People’s Assembly.

Despite its criticism of the Moon government, North Korea still expects Seoul to play a certain role in facilitating dialogue between Pyongyang and Washington amid a stalemate in their bilateral negotiations. I imagine North Korea wants South Korea to deliver the North’s position to the U.S., rather than just relaying Washington’s message to Pyongyang.

That is, the North is urging the South to act as a party that is directly involved, not just as a mediator or facilitator.  In light of this, I think a fourth summit between Moon and Kim will be possible, despite North Korea’s comments.

Many suspect that North Korea will accept Moon’s offer in part to find out what, if anything, has changed after the Moon-Trump summit. The fourth Moon-Kim summit, if realized, will focus on ways to jumpstart the stalled nuclear talks between the North and the U.S.

But the inter-Korean summit is unlikely to take place anytime soon, at least not before the North Korean leader’s apparently imminent Russia visit. The Kremlin confirmed this week that preparations were under way for a summit between North Korean leader Kim Jong-un and Russian President Vladimir Putin.

Why is North Korea pushing for a summit with Russia while stone-walling the South?

With nuclear negotiations between North Korea and the U.S. at a standstill, North Korea stresses the importance of “self-reliance,” as underlined yet again during the North Korean leader’s speech last week.

For North Korea, another priority is to build solidarity with current and former communist states. The nation largely restored relations with China through a bilateral summit in March last year. In early November last year, Kim Jong-un held a summit with visiting Cuban President Miguel Diaz-Canel in Pyongyang to promote relations between the two countries. A summit between North Korea and Vietnam also took place after the Trump-Kim summit in Hanoi. Now Pyongyang’s attention turns to Russia. By cementing ties with these countries, North Korea is signaling a desire for greater involvement in the international community, and will pursue this goal before any further summit talks between South Korea and or the U.S.

Putin is expected to attend a forum on China’s Belt and Road Initiative in Beijing on April 26 and 27. Analysts expect that Kim may meet the Russian President in Vladivostok around that time. It is easy to predict that North Korea will seek stronger cooperation with Russia as it braces for drawn-out negotiations with the U.S.

North Korea agrees in principle on denuclearization of the Korean Peninsula. However, beyond dismantling its Yongbyon nuclear complex and ceasing nuclear and missile tests, North Korea does not appear willing to give up more than that, and is trying to extract the maximum amount of concessions for these measures.

However, the U.S. says that the Yongbyon complex is insufficient. It wants all or nothing—the handover of nuclear weapons and materials and the removal of weapons of mass destruction, including biochemical weapons and intercontinental ballistic missiles that pose a threat to the U.S. mainland. The U.S. believes that North Korea will acquiesce eventually so long as sanctions on the North remain in place.

Probably for that reason, North Korea has hinted that it may return to provocations unless a denuclearization agreement is reached by the end of this year.

During his policy speech on April 12, the North Korean leader set an apparent time limit on negotiations, saying that he will wait until the end of the year to see if the U.S. makes a bold decision. In response, Trump said that he is open to a third summit between Pyongyang and Washington, but that he would not rush in to one.

While there is continuing disagreement between North Korea and the U.S. over denuclearization, both sides want to keep dialogue going. In this situation, the South Korean president’s role is becoming increasingly important.

Seoul has sought middle ground between Trump’s one-shot deal and Kim’s step-by-step approach to denuclearization. If the two sides manage to settle for a ‘good enough’ deal, negotiations between the two sides could resume before eventually leading to a third Trump-Kim summit.

Under Kim Jong-un’s father, Kim Jong-il, assistant secretary-level meetings prior to six-party nuclear talks led North Korea to suspend the operation of its nuclear facilities, disable and declare them. This time, too, mid-or high-level talks could be convened to discuss practical measures to keep momentum for negotiations alive, rather than making summit talks handle everything. In the process, the two sides may find a compromise between the grand bargain insisted upon by the U.S. and the phased approach for denuclearization advocated by the North.

The main agenda of the fourth inter-Korean summit between Moon and Kim, if held, will be how to resume dialogue between North Korea and the U.S. The key will be narrowing their differences over denuclearization and determining what role South Korea will play in the process.