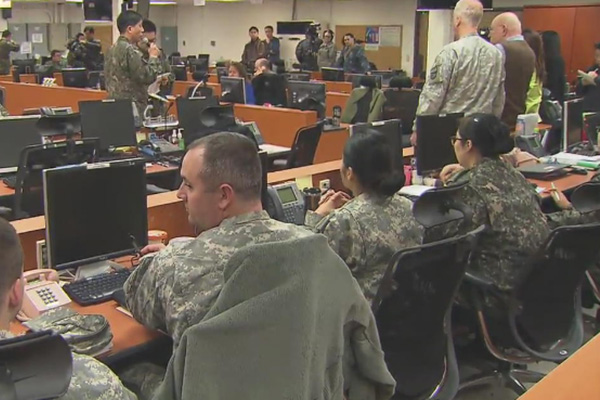 Anchor: The South Korea-United States' scaled-down joint summertime military exercise, known as the "Combined Command Post Training," came to a close on Tuesday. The completion of the drill is raising speculation as to whether North Korea will now halt its missile testing and return to denuclearization talks with the U.S.
Choi You Sun reports.

Report: The ten-day "Combined Command Post Training" that ended on Tuesday aimed to determine the ability of allied South Korean and U.S. forces to defend South Korea against a North Korean invasion and launch a counterattack.

No forces were actually mobilized in the computer simulation-based exercise. To support peace efforts with North Korea, Seoul and Washington scaled back decades-long joint exercises such as Key Resolve, Foal Eagle and Ulchi Freedom Guardian in favor of smaller-unit or virtual training.

The latest exercise focused on testing Seoul's initial operational capability(IOC) as part of the conditions for its retaking of wartime operational control from Washington, as agreed between the allies in 2014.

Under the envisioned platform of the future joint command, a South Korean general took command of the Combined Forces Command(CFC), with an American general taking the role of vice commander.

The completion of the latest drill is drawing special attention as to whether it would prompt Pyongyang to suspend its recent series of missile launches and resume denuclearization dialogue with Washington.

Since July 25, North Korea has fired short-range projectiles six times, including newly-developed short-range ballistic missiles, in protest of the joint exercise, calling it a rehearsal for invasion of the North.

Unveiling a letter from North Korean leader Kim Jong-un earlier this month, U.S. President Donald Trump said Kim made a "small apology" for the missile testing, expressing his will to reopen talks with the U.S. once the training ends.

North Korea, meanwhile, continued criticizing the South over the joint exercise on Tuesday, saying it is an "outright hostile act of invasion" and a "military provocation that cannot be tolerated."

The North's Rodong Sinmun accused Seoul of stoking tensions on the Korean Peninsula and warned it will pay a heavy price for such "stupid" acts.
Choi You Sun, KBS World Radio News.