S. Korea's Top Diplomat Expects US to Have 'Open Attitude' in Talks with N. Korea 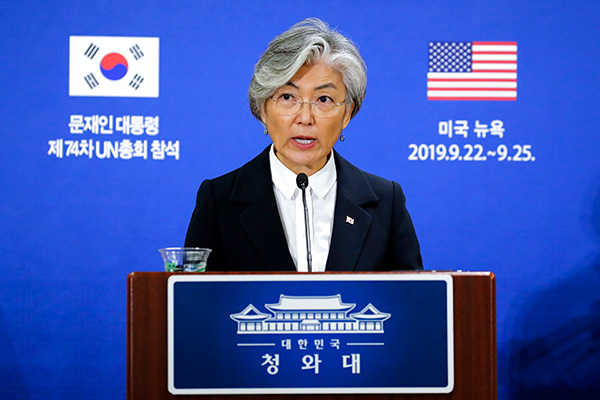 Foreign Minister Kang Kyung-wha said on Sunday that the U.S.’ basic disposition is to enter negotiations with North Korea with an "open attitude" regarding all issues, including security guarantees and sanctions.

The minister made the remarks during a press briefing in New York when asked if those issues could be discussed at this week's upcoming summit between President Moon Jae-in and U.S. President Donald Trump.

Kang said that the most important thing at present is the resumption of working-level denuclearization negotiations between the U.S. and North Korea.

The top South Korean diplomat said that there have been diverse analyses on the reasons behind the collapse of the second U.S.-North Korea summit in Hanoi, explaining that Seoul and Washington are devoting particular attention to the North's ideas about security guarantees.

Kang added that the biggest task in the working-level negotiations is the creation of a “roadmap" when asked whether an agreement on the definition of denuclearization will be realized.