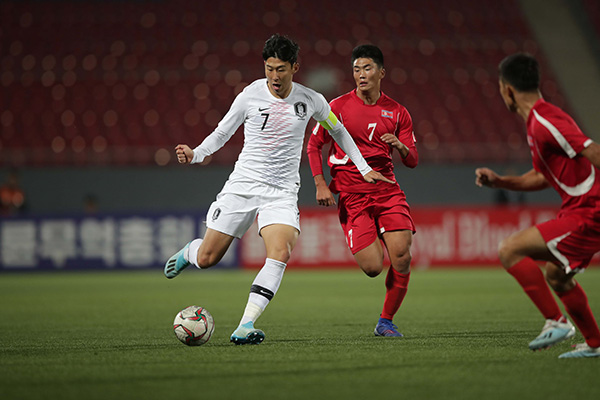 The rare inter-Korean men's qualifier, held at Kim Il-sung Stadium in Pyongyang, was slated to air at 5 p.m. on Thursday following a review of the recorded footage given to the South Korean national team.

KBS didn't provide further details, but the Korea Football Association(KFA) in Seoul said the quality of the footage wasn't good enough for broadcast and that it will ask the Asian Football Confederation to provide additional footage.

The KFA also said that it decided not to distribute the footage to the media for now because broadcast rights haven't been confirmed and there is a need to clarify.

The match, which was neither broadcast nor attended by spectators, was apparently a chippy affair, with the North Korean team playing physical and hurling insults at their South Korean counterparts.

The game ended in a scoreless draw. While both teams remain undefeated in group play, South Korea's goal differential through three games places them atop Group H.