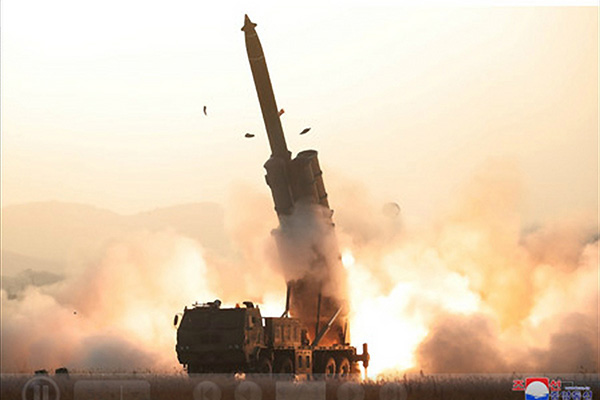 Anchor: North Korea's official newspaper said that the country succeeded in test-firing what it calls a “super-large" multiple rocket launcher on Thursday. The paper said that the test verified the readiness of the rocket system, which it claimed would be a key weapon of the North Korean military.
Celina Yoon has more.

It said that the launches tested the stability of the weapon’s continuous fire system, verifying combat and field performance.

It claimed that a surprise strike by a super-large multiple rocket launcher could wipe out a group of enemy targets and that the system will be a key weapon of the North Korean military.

The newspaper also said that North Korean leader Kim Jong-un was "greatly satisfied" by reports of the successful weapons test, indicating he did not personally supervise the launches.

North Korea fired projectiles in August and September as well, claiming them to be from super-large multiple rocket launchers. The North is believed to have fired three projectiles on Sept. tenth, but analysts say the test was a failure as two of the three didn't reach the East Sea.

It added that the projectiles, fired from the vicinity of Sunchon, South Pyongan Province, flew about 370 kilometers with a maximum altitude of around 90 kilometers before falling into the East Sea.

The tests are seemingly aimed at not only verifying the development of a new weapons system but also putting pressure on the U.S. to guarantee the security of the regime.