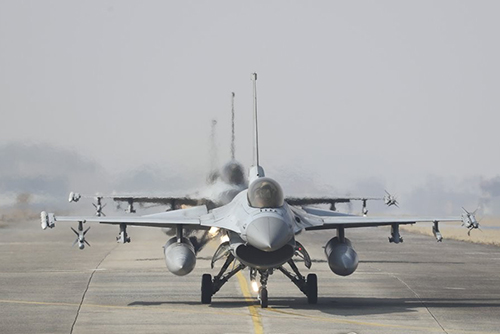 Anchor: The U.S. Department of Defense says South Korea and the United States will conduct in mid-November a scaled-back training exercise in lieu of the larger Vigilant Ace annual exercise. The decision comes as North Korea has denounced the upcoming exercise and Washington and Pyongyang struggle to reduce gaps on the terms of the North’s denuclearization.
Kim Bum-soo has more.

Report: The U.S. military has confirmed it will carry out a fighter jet drill with South Korea later this month.

[Sound bite: Navy Rear Adm. William D. Byrne Jr. - US Joint Staff vice director]
"The most important thing to us in the Korean theater is maintaining readiness, being ready to fight tonight. So a year ago we canceled the exercise Vigilant Ace and that was based on the environment on the peninsula at the time. This year we’re conducting a combined flying event: US and ROK air forces.”

During a news conference at the Pentagon on Thursday, U.S. Rear Admiral William Byrne, vice director of the Joint Staff, said the exercise is designed to maintain readiness against North Korea.

[Sound bite: Navy Rear Adm. William D. Byrne Jr. - US Joint Staff vice director]
"... and General Abrams and his ROK counterpart are charged with ensuring that we’re conducting the right number of combined events, the right type of combined events in order to maintain that readiness, maintain that integration so that we’re ready to fight tonight, while allowing our diplomats the space and the room to continue negotiations with North Korea."
(Reporter: So what size will be this…)
"I am not going to talk specific force numbers, specific airplane numbers, but it’s a reduced scope from the former Vigilant Ace exercises. But it meets all the requirements of the ROK Air Force [and] the U.S. Air Force to ensure readiness."

Officials in Seoul say the allies are expected to mobilize dozens of aircraft.

Launched in 2015 and held annually until the allies suspended it last year, the Vigilant Ace exercise saw the participation of a larger fleet of South Korean and U.S. aircraft.

Pyongyang says the upcoming air drill is a rehearsal for invasion. In a recent interview with state-run media, a North Korean official called the exercise a "declaration of confrontation," adding that his government's patience was "running thin."

The Pentagon said that Seoul and Washington do not scale or conduct joint exercises based on Pyongyang's reactions.
Kim Bum-soo, KBS World Radio News.