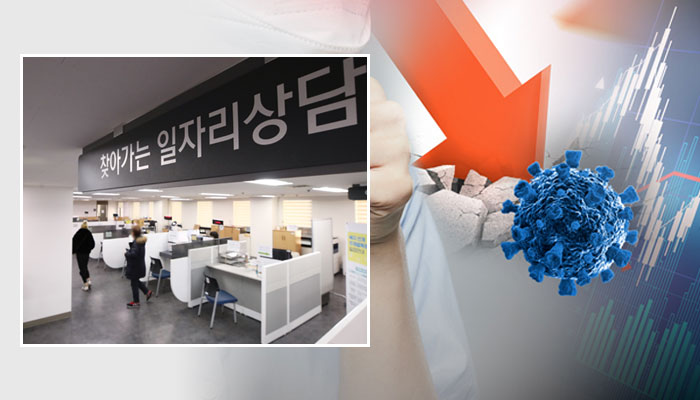 The South Korean economy is forecast to post negative growth for the first time in 22 years since the Asian financial crisis due to the prolonged COVID-19 pandemic.
The real gross domestic product(GDP) posted negative growth of one-point-three percent in the first quarter, and three-point-two percent in the second quarter, with the economy contracting for two consecutive quarters. In the third quarter, the economy partially rebounded with a two-point-one percent expansion, but a third wave of the epidemic in the country, and around the world, led to another falling curve.
The self-employed, most of whom operate businesses in the service sector involving face-to-face contact, were struck the hardest, while exports stagnated due to lockdowns imposed by countries around the world.
Outbound shipments are estimated to have contracted six-point-four percent on-year to total 507-point-7 billion dollars this year, indicating that exports will post negative growth for the second straight year, after they contracted ten-point-three percent last year compared to 2018. The export industry, however, is assessed to have put up a good defense by seeking new momentum through the nontact sector with products related to the so-called stay-at-home economy and the biohealth industry.
Employment was also sluggish. The number of those who found jobs in April declined 476-thousand compared to a year earlier, the biggest margin in 21 years and two months. The drop in October was 421-thousand.
The government has drawn up four rounds of extra budget totaling 66-point-eight trillion won to minimize the economic fallout from COVID-19, and introduced various financial aid package programs and stability funds worth nearly 200 trillion won for businesses battered by the crisis. A large-scale issuance of deficit-covering bonds was inevitable, causing the national debt to snowball.
The government, meanwhile, forecasts the economy to post a contraction in the one-percent range in 2020.