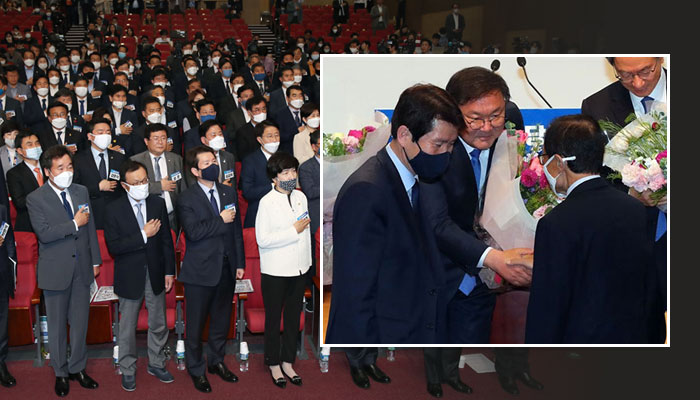 At the National Assembly, a system was established allowing the ruling party to conduct parliamentary politics in a style similar to totalitarianism.
During the 21st general election on April 15, the ruling Democratic Party(DP) won 163 district seats and another 17 proportional representation(PR) seats through its satellite Together Citizen's Party to secure 180 seats total.
The main opposition United Future Party(UFP) only managed to win 103 seats, including its district and PR seats through the satellite Future Korea Party(FKP), having to contend with keeping enough seats to block a constitutional amendment. The third-largest Minsaeng Party, meanwhile, failed to win any seats, with parliament effectively reverting back to a two-party system.
The number of seats held by the ruling party in the 21st Assembly is the largest by a single party in the country's history. Its 60-percent seat ratio is also the highest since the democratic constitutional amendment in 1987. This allows the ruling party to act unilaterally, such as placing bills on fast-track or stopping a filibuster, with the exception of amending the Constitution.
With the ruling party refusing to allow the opposition to take the chairmanship of the parliamentary legislation and judiciary committee as it had been common practice, the UFP boycotted negotiations on assigning committee chairs. The DP, therefore, took all 18 of the posts, also the first since 1987.
After the UFP lost the election, Kim Chong-in took the helm as an emergency committee chief, and the party later changed its name to People Power Party(PPP).
Backed by its 60-percent seat ratio, the ruling party moved to unilaterally pass contentious bills on reforms to the prosecution and the National Intelligence Service(NIS), as well as setting up the powerful Corruption Investigation Office for High-ranking Officials(CIO).