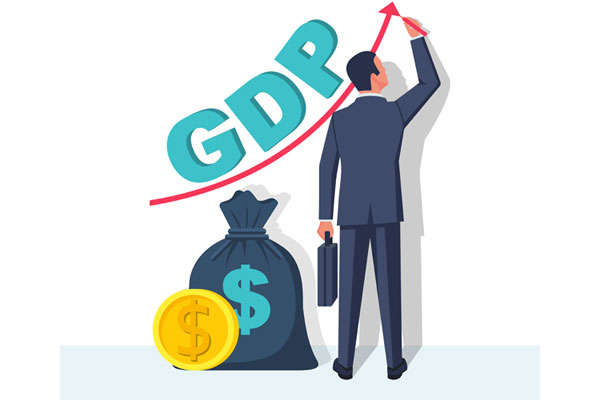 The Korean economy is pulling itself out of the mire of negative growth. The better-than-expected growth in the first quarter of this year shows that the economy has recovered to the level before the COVID-19 pandemic.

On April 27, the Bank of Korea said that South Korea’s gross domestic product increased 1.6 percent on-quarter in the first three months of the year, led by a recovery in exports and domestic demand. Private consumption rebounded 1.1 percent, while exports and facility investment rose 1.9 percent and 6.6 percent, respectively. The country’s GDP in the first quarter exceeded the level recorded in the fourth quarter of 2019, just before the outbreak of the pandemic.

Here is Bae Min-geun, researcher at the LG Economic Research Institute, to discuss the implications of Korea’s first-quarter economic growth.

The rate of increase seems to have slowed, but I don’t think it’s bad news because exports still remain on an uptrend after recovering to the certain level. Robust exports were supported by the strong performance of semiconductors, IT products, electric vehicle batteries and shipbuilding.

Also, it seems that big government spending on the service industry and self-employed businesses helped prevent consumption from shrinking rapidly.

Korea’s first-quarter growth figure beat the projections by private economic research institutes, international organizations and global investment banks. Also, Korea’s GDP managed to rebound above the pre-pandemic level one quarter earlier than previously forecast. It is worth mentioning that the Korean economy recovered at the fastest pace among advanced countries comprising the global top ten economies.

Let’s suppose that the GDP value was 100 in the fourth quarter of 2019. For the U.S., the figure in the first quarter of this year is 98.9. In the same period, the figures are 97.7 and 94.9 in the case of Japan and Germany, respectively. For South Korea, it is 100.4, indicating that its economy recovered the fastest among advanced economies. It is widely believed that the pandemic had a more serious economic impact on the U.S. and Europe than on South Korea and China, as the two Asian countries managed to prevent the virus from spreading too fast in the early stage. The Korean economy, in particular, tended to rebound relatively quickly from economic crises in the past, due to the great contribution of its exports to GDP growth. This time, too, it seems Korea took a similar path.

On April 28, global ratings agency Standard and Poor’s said that it maintained South Korea’s long-term sovereign credit rating at the previous level of “double A” with a stable outlook. In its report, the agency noted that the Korean economy contracted last year for the first time since 1998 due to the pandemic, but growth is back on track and the decline was less than that of most other high-income economies.

In this upbeat mood, expectations are running high that the Korean economy will expand in the mid-to-upper 3 percent range or even over 4 percent this year.

Despite the positive projections, it’s too early to be optimistic because there are still unfavorable factors looming over the economy, including concerns over the resurgence of COVID-19 infections.

We need to go over some negative factors. First, a possible adjustment of high asset prices and snowballing household debt could dampen private consumption. An increasing number of Koreans have invested in real estate, stocks, bonds and virtual assets like Bitcoin. But a potential adjustment of some volatile markets may negatively affect the economy overall. Outside Korea, relations between the U.S. and China are rather uncomfortable. Geopolitical risks stemming from their intense tug-of-war may weigh on export markets around the world.

The distribution of COVID-19 vaccines is cited as the biggest factor to influence economic recovery. According to the Bank of Korea, the disparity in the vaccination rates between countries will influence the recovery pace of advanced economies and emerging markets. Emerging economies that start their inoculation program rather late may enter a recovery phase next year. This isn’t good news for the Korean economy, which relies heavily on external trade.

Korea depends on exports for growth. Its exports have enjoyed a boom over the last 20 years, largely due to the rise of emerging economies including China. Korean companies manufacture and sell products in emerging countries, which carry great significance for Korea as both production bases and markets. Korean firms have manufactured goods in low-labor-cost developing countries. But they will no longer find it easy to do so and they may have to relocate their production base. The costs incurred by the transition may affect the Korean economy to some extent.

Both the U.S. and China are urging South Korea to pick a side between the two. If Korea chooses one side, the other side will retaliate. These risks and uncertainties continue to linger.

Another disturbing part is economic polarization in Korea. While corporate sentiment is improving, the gap between companies is only growing wider. In terms of companies’ assessment of the current business environment, findings show the largest gap ever between exporters and companies targeting the domestic market, between large companies and smaller ones. Pandemic-hit low-income citizens and self-employed people do not really feel the recovery, either.

The polarization issue is not something that started just recently. But it seems polarization between large companies and small ones, between high-income earners and low-income ones, has deepened even further amid the pandemic. Calls are growing for the government to remedy this problem.

Korea is not the only country dealing with economic and social polarization. Many countries seek to impose more tax on high-income earners and companies, while providing more support to low-income groups. I imagine Korea will adopt a similar policy.

The first-quarter economic growth shows that the Korean economy has escaped a long tunnel created by the pandemic, ready to get back on a normal track, as President Moon Jae-in has said. To maintain a steady recovery, Korea needs to carefully examine risk factors inside and outside the country and also map out a detailed policy so no citizens will be excluded from the benefits of recovery.