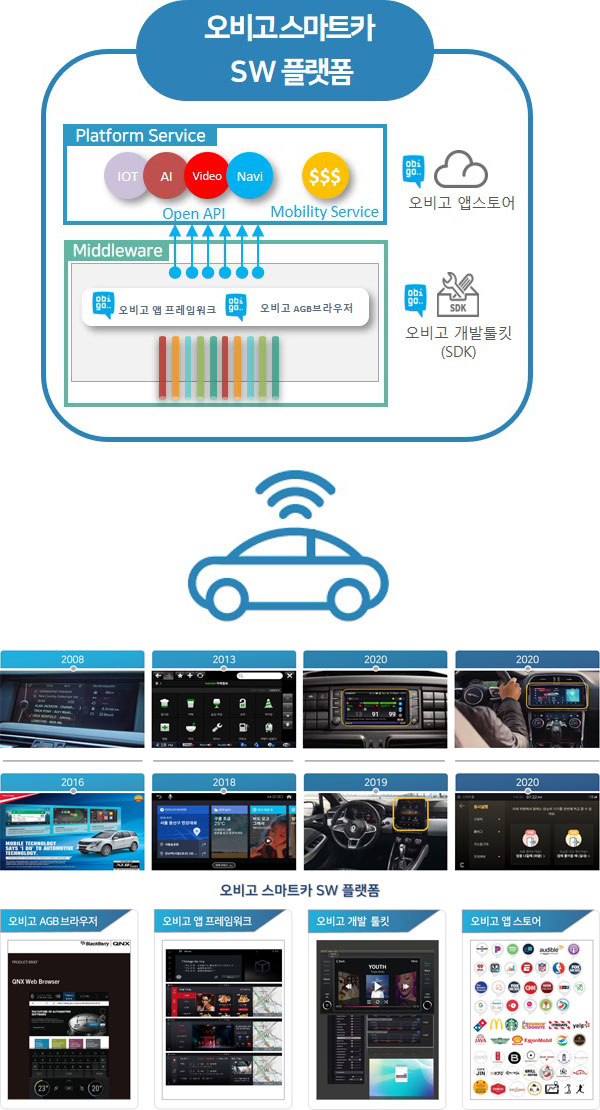 I saw a smartphone for the first time around 2007 when the iPhone was launched. When drawing up a new business plan, I thought that a smart car, like a smartphone, would soon be created. Generally speaking, the navigation systems embedded in today’s cars remain in place for the life of the vehicle. However, many drivers do not really use these onboard navigation systems, instead relying on car navigation smartphone apps, which is inconvenient. I thought that conventional cars ought to solve these problems, so my company started working on automotive solutions in 2009. The company has now become a world-famous smart car platform provider offering solutions that enable users to download and install apps on their vehicles, just as they would on their smartphones.

Hwang previously worked at Samsung Electronics and a foreign company to develop technologies and create new products and before setting up his own company, OBIGO. The company initially launched as a mobile web browser but now works on vehicle-specific technologies, specifically a platform capable of getting smartphone apps to run in cars.

Before the arrival of smartphones, mobile phones were only used to make voice calls or take photos. But these days, people do a lot more things using their smartphones. When drivers use navigation apps, they place their smartphone on a car phone holder and activate the app on the phone. But it’s rather inconvenient because whenever they get a phone call, the map disappears from the phone screen. Furthermore, the car’s built-in display console is not used, although it occupies space. But these displays can be used to show driving maps and play music, which is what we’re working on. Apps can be downloaded and activated on the big, in-vehicle display.

Many of the latest car models are equipped with this system to activate in-vehicle applications, with the related market sector quickly expanding.

OBIGO saw great potential in this area and jumped into the market, but it faced a harsh reality. It was difficult to improve technology, of course, but it was even more challenging to gain recognition in the global market. The company failed to secure regular orders early on, due to its low brand awareness.

But once their technology completed a strict multi-year verification process, it signed contracts with foreign automakers one after another. OBIGO was able to supply its smart car platform to eight out of top ten carmakers in the world, only 10 years after it started its automotive business.

Unlike Korean exporters that generally seek to establish a reputation in Korea first before exploring foreign markets, we produced our solutions overseas. One of the world’s top three automakers uses our platform. Whereas android is an operating system or OS for smartphones, and Windows OS is for PCs, many cars use an OS called QNX. OBIGO’s browser is installed within the QNX operating system, just as the Chrome browser is installed in smartphone operating systems like Android. That means OBIGO’s browser can be used in most vehicles that use the QNX OS.

OBIGO’s heyday has just started, as an era of a connected car is drawing nearer. A connected car is a next-generation car that offers two-way communication with other systems outside the car by connecting a person, a vehicle and other electronic devices through advanced network technology. According to global consulting firm Mckinsey, the global connected car market is estimated to grow up to 1.5 trillion US dollars in 2030.

Riding on this trend, the value of OBIGO’s technology is also increasing. As demand for relevant technology grows, the company’s patents have seen a corresponding increase in value. In 2018, 30 percent of the patents obtained by the company were Grade A, but the figure rose to 78 percent last year.

Software developers in Korea mostly provide consulting services. OBIGO, on the other hand, does not offer consulting but receives as a royalty a certain amount per platform installed. However, the barrier to entry in becoming a platform is high, and it took a very long time for this small company in Korea to get its technology verified before selling its products globally and receiving royalties. For example, the verification process took four years before providing our platform to a European carmaker, and two years for Korean firms. We managed to pass all the rigorous procedures, and this differentiates us from other companies. Once the platform is built, various apps can be installed on it. Whenever new apps are added to the platform, we might collect commissions. These days, a company can consist of one single app, as seen in Kakao and Coupang. Similarly, we could create our own app to become a unicorn company in the automotive industry.

The forthcoming automobile era will be a new opportunity for OBIGO. Self-driving vehicles are expected to become commercially available soon to expand the mobility ecosystem.

In a new era of “car commerce,” drivers will be able to buy everything on the go, including gas, without having to use their smartphones or swipe credit cards. Drivers will be able to make use of so-called “mobility services” that inform them of when to change engine oil through in-vehicle data. To get a head start in the market, OBIGO plans to collaborate with various companies. In preparation for the era of self-driving cars, it is also developing services to be enjoyed inside cars. On another upbeat note, there is great news about the company.

OBIGO will be listed on Korea’s secondary KOSDAQ market in July. In fact, it is quite challenging for venture firms to reach the stage of initial public offering or IPO on KOSDAQ. The KOSDAQ listing is a great achievement for us.

Currently, we’re working on two areas. First, we collect smartphone content that is already available on platforms such as YouTube and Netflix in order to get the apps to operate in the automotive domain. Second, we’re developing our own services that are tailor-made for vehicles, and we plan to further develop our existing platform and collect vehicle-specific services to run on that platform. We hope to enrich users’ driving experience and increase driver convenience and enjoyment behind the wheel. That’s our goal.

It is now almost impossible to catch up with OBIGO, which has surpassed a high entry barrier. On the back of its stable sales, it is now establishing itself as a global brand. The company’s goal is to build an “OBIGO service ecosystem,” at least inside cars, and develop into a global mobility service provider. Remember the name of this promising company, OBIGO!