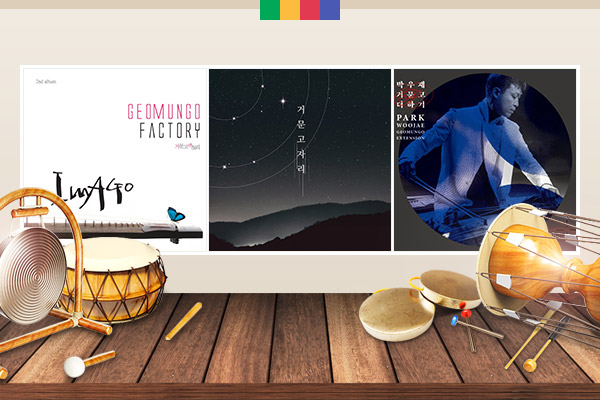 Many of you still may remembers a portable cassette player named Walkman. It was originally a brand name of a particular electronics company, but every device similar to the Walkman cassette player eventually came to be called a Walkman. A comparable phenomenon was observed with musical instruments. The word “piri피리” became a blanket term for all wind instruments such as daegeum대금, taepyeongso태평소, danso단소, and sogeum소금. The word “gayageum” encompasses all hand-plucked string instruments these days, but in the old days the term “geomungo” served that purpose. In old Chinese documents, the letter “geum” meaning a geomungo was used for both gayageum and geomungo, making it difficult for later readers to distinguish the two. This indicates that the geomungo was an instrument much widely played back then. Today’s first piece is titled “Lyra,” a constellation with Vega as its brightest star, also known as Jiknyeo직녀 Star in Korea. The Greek myth associated with Lyra features Orpheus, Apollo’s musically gifted son, who played the lyre in front of Hades to reclaim his dead wife from the Underworld. When Orpheus died, his lyre was placed in the sky to become the constellation we now know as Lyra. Here’s a gugak musician named Geomungojari performing “Lyra.”

Geomungojari is the stage name of gugak musician Kim Eun-seon김은선. She used to play for various fusion gugak bands before branching out on her own to write her own music with her stories and personal feelings.

People in the old days used to call the geomungo as the best of all instruments and the instrument of seonbis선비. Back in those days, music wasn’t just for listening and enjoying, but for communicating with the cosmos and controlling your inner self according to the workings of great nature. According to the ancient historical book of Samgukyusa삼국유사, a historical documentation of the Three Kingdoms, a deceased king sent a dragon to his country Silla to deliver a magical instrument called Manpasikjeok만파식적. This wind instrument defeated invading enemies, brought rain in a drought, and dispelled all worries of the world. If this flute was an instrument that changed the world, geomungo was an instrument that changed oneself. People used to play the geomungo to calm their hearts and train their minds to be insightful. It’s not surprising that a lot of people balked when the geomungo, considered the instrument of gentlemen, was used at the end of Joseon period to play free style sanjo pieces to arouse people’s feelings. Next up is a geomungo piece titled “Black Bird” performed by Geomungo Factory, an experimental gugak ensemble.

Geomungo Factory was a team comprised of three geomungo players and one gayageum musician. They experimented with different playing techniques, like using a bow to play the geomungo or plucking the geomungo strings with their fingers instead of using a tool named “suldae술대.” Geomungo Factory didn’t last long, not even ten years, but their experimental spirit has been inherited by many young traditional musicians. The last piece for this week’s Sounds of Korea is performed by Park Woo-jae박우재 who plays the geomungo with a bow to generate a sound that resembles a cello or an ajaeng아쟁. Added to this new sound of geomungo is the voice of female singer Park Min-hee, which produces an eerie and mystical atmosphere. Here’s Park Woo-jae playing “Voice and Geomungo.”