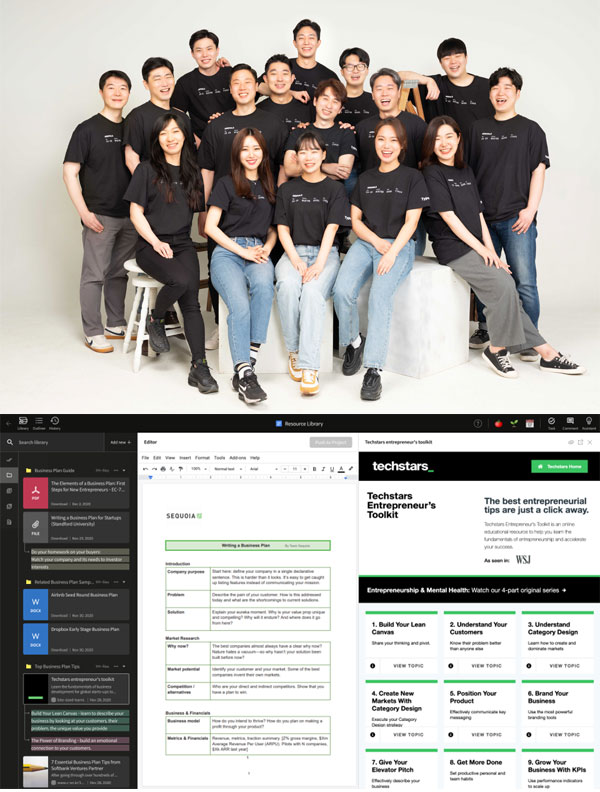 Today, we’re going to introduce you to Business Canvas, a developer of an all-in-one documentation tool that helps users create documents more efficiently. Let’s hear from Yoo Min-seung, a global business strategist at the company.

Business Canvas is a developer of an innovative document-based knowledge management solution called “Typed.” The company has been working hard to remove inefficiency in document writing in this digital era. It has attracted 2.5 million US dollars of investment within a year of its foundation in July last year. The beta version of “Typed” is being used by over 10-thousand testers from around the world. Anyone can apply for and test the beta version on typed.do.

While technology has been developed in various areas to make our lives more convenient, there has been no ground-breaking innovation in document work. Many people are still working on their documents at companies, schools and homes in an inefficient way. When writing documents, they spend a lot of time in searching necessary information and open different folders one by one to find certain documents that had been written before. They need to download different viewer programs for different word processors such as MS word and HWP to read files. But people simply conform to the inconvenient environment.

“Typed” allows users to view various file formats such as website, PDF, Word, Excel and others on one platform without a separate viewer program. It is a workspace that turns scattered information into meaningful knowledge so people can manage data in a way they want and work on documents more easily and efficiently. Regardless of format or tool, “Typed” manages all sorts of data effectively in one digital workspace and even recommends relevant information.

People may waste time searching data, not being able to concentrate on important tasks. “Typed” resolved this problem by enabling users to collect data and produce documents in the same environment. That means users don’t need to keep multiple web pages, files and folders open and switch among them while writing documents. The “backlink” function also makes it easy to find relevant data. “Typed” analyzes correlations among different tasks and recommends necessary information. It can also find out duplicate files.

More and more people are working from home amid the COVID-19 pandemic. Using the innovative solution, they can perform their tasks efficiently in this changing work environment.

While digitalized work in office has long been discussed, digital collaboration has emerged as one of the major business topics in the pandemic. Forbes has predicted that companies will more than double their budget on Software as a Service or SaaS. Indeed, the market for software solutions for business use has exploded, with productivity tools and collaboration tools pouring in. But few solutions have been developed in the documentation area.

“Typed” is ideal for the changing work environment. It enables team members to collaborate on knowledge management in real time. This is the solution’s biggest strength. In other words, they don’t have to make phone calls or send emails to figure out who updated shared documents, nor when and how they were updated. They don’t have to spend money on research, either, as they can utilize data that they stored and managed already.

The beta version of “Typed” has already drawn an enthusiastic response from testers. In March, it was named as “Product of the Day” by Product Hunt, which is dubbed the Billboard for software. Before the launch of its official service, the company released 100 Lifetime Access vouchers priced at 100 dollars each on limited offer. They were sold out in just three days. The company drew beta testers from 132 countries, with those outside Korea accounting for 65 percent of all testers, indicating that the service is well received in the global market. The company expects that the number of users will surpass 20-thousand by the third quarter of the year.

The company has attracted a huge amount of investment from multiple investment companies. It was selected for the Ministry of Science and ICT’s “Software High Growth Club” and also became the excellent achievement-sharing enterprise chosen by the Ministry of SMEs and Startups. The company was able to make such a remarkable achievement, although it’s been only 14 months since its inception. The key to the company’s success lies in its relentless efforts to communicate with users.

Even before the product release, we contacted potential users and asked them what problems they found. After the release, we interviewed with testers all around the world every day, until 3 to 4 a.m., to reflect their opinion in the product. We had to invest a lot of time and effort in order to search extensive information, analyze it and actually apply it to the product. But we thought we should listen to people’s opinion as much as possible to eventually resolve the problem faced by everyone. We have always been conscious of end users and we’ve been able to grow little by little.

We focus on something that is most basic yet most difficult. That’s our greatest asset.

The company’s journey has just begun. It set up a corporation in the U.S. in April in a move to spur efforts to tap into the global market. By collaborating with global firms, Business Canvas plans on expanding its business into education and enterprise markets.

It may sound too ambitious, but our goal is to break down the folder system that has lasted for over 50 years as a file management method and to lead a shift in knowledge paradigm worldwide. Like the invention of movable metal type during Korea’s Goryeo Dynasty, it would be great to see South Korea develop an innovative tool that helps make progress in knowledge yet again in the 21st century. We hope to achieve that revolution. We would very much appreciate if you support us, use our products and even give us constructive criticism, if necessary.

Word processing software we use was developed as a tool for providing output options such as printing, so it can’t catch up with the changing non-face-to-face work environment. But we’ve become so used to the existing method that we find it difficult to change it altogether all of a sudden. “Typed” offered by Business Canvas is optimized for the current writing system and comprehensive document work. It will soon appeal to users the world over as Korea’s leading brand.