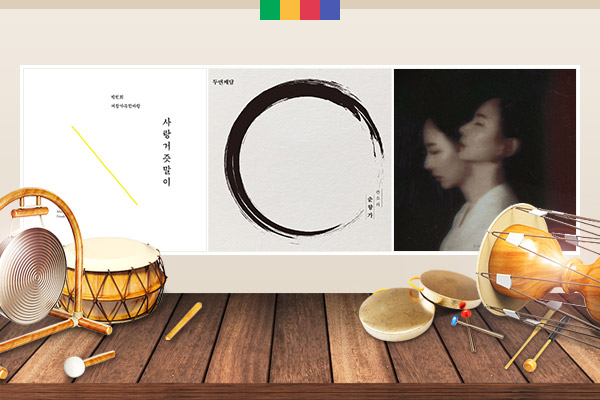 The discipline of gagok가곡 refers to sijo poems set to orchestra music. Gagok pieces are general very slow and each syllable of the lyrics is stretched out sung in a long stretch, making the words hard to catch and understand. People who listen to gagok pieces sung mainly by women claim that the balanced harmony between the singer’s voice and the sound of instruments is more than enough to make up for gagok’s slow pace and unintelligible words. But there are some gagok pieces that contain the word “pyeon편” in their titles, such as “pyeonsudaeyeop편수대엽” or “pyeonrak편락.” Such songs are faster in pace and more cheerful than other gagok pieces so they are easier to enjoy. Today’s first piece is women’s pyeonsudaeyeop gagok titled “Daeinnan대인난,” which means the difficulty of waiting for someone. Its lyrics describe how difficult it is to wait for your loved one and how delightful it is for the lovers to finally meet and spend time with each other. Here’s Park Min-hee singing “Daeinnan.”

Several traditional songs have a subject matter similar to “Daeinnan.” An aria in pansori “Chunhyangga춘향가” sings of Chunhyang waiting impatiently for Mong-ryong몽룡 to return. When Lee Mong-ryong first told Chunhyang that he was going to Hanyang to take the government exam, she hounds the son of a nobleman to take her with him. But it was unheard of back then for a bachelor gentleman to travel with a gisaeng’s daughter without marrying her. Left alone in Namwon to wait for him, Chunhyang must have doubted Mong-ryong’s love for her and wondered if he would ever come back. She also must have regretted not following him to Hanyang despite the town folks’ disapproval. The song she sings while questioning Mong-ryong’s loyalty is titled “I Should Have Gone.” The song goes roughly as follows.

I should have gone no matter how far the road,

No matter how high and rocky the mountains.

This song highlights how much Chunhyang regrets not accompanying Mong-ryong to Hanyang. Here’s Kim Jun-su singing “The Song of Goodbye” to the instrumental accompaniment of fusion gugak band Second Moon.

The Song of Goodbye / Sung by Kim Jun-su, performed by Second Moon

In the late Joseon period there was a poetess named Lee Ok-bong. Back then it was customary for one’s parents to choose one’s spouse. But being smart and independent, Lee traveled to Hanyang, today’s Seoul, on her own and wrote various poems to solidify her place as a renowned poetess. One day she fell in love with a married man and, after much persuasion, willingly became his concubine. One day she wrote her neighbor a poem petitioning leniency for the neighbor’s husband arrested under false charges. The poem was effective in winning freedom for the neighbor’s husband, but Lee Ok-bong was accused of interfering with government affairs and sparking a social controversy. Lee’s husband resented her for the trouble and kicked her out of the house. But she didn’t blame him and waited for him to take her back. The poem she wrote while waiting for her husband, titled “Monghon몽혼,” meaning a spirit in a dream, goes something like this.

I ask how you are faring these days.

The window under the moonlight bear so much of my resentment.

If my spirit can leave traces in your dream,

The stone path in front of your house would have turned into sand.

This heart-wrenching poem was put to music and became a song of the western region titled “Susimga수심가.” Let’s wrap up this week’s episode with “Susimga,” the song of deep yearning, sung by Kim Moo-bin.