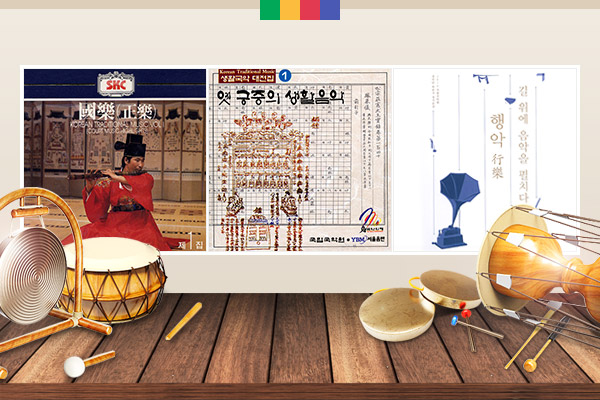 King Sejong, the fourth monarch of Joseon, is best known for creating the Korean alphabet of Hangeul. But there are so many more of his achievements that it is hard to list them all. Among them are the creation of astronomical tool Honcheonui 혼천의, the Jagyeokru 자격루 water clock, and the sun dial called Angbuilgu 앙부일구. He improved printing efficiency by making new font type and wrote books in fields ranging from history and agriculture to medicine and music. He also refined the measurement system and innovated artillery weapons. Amazingly, he was capable of producing stellar results in every project he undertook. Among his countless achievements is music. It was 25 years after he was crowned. It was a time when the chaos from the fall of the Goryeo Dynasty and the rise of Joseon still plagued the nation. King Sejong realized that many of the musical instruments for court music were destroyed and their musicians lost during the unsettling times. So the king ordered scholar Park Yeon 박연 to sum up musical theories and restore instruments. One of the rediscovered music is the Munmyo Jeryeak 문묘제례악, a collection of music pieces played during the memorial services for Chinese and Korean literary sages. Let’s listen to a song from the collection. Here’s the Court Music Orchestra of the National Gugak Center performing “Hwangjonggung 황종궁” from Munmyo Jeryeak.

Even if you were among those skeptics who believed that all gugak songs sounded the same, you might have thought that this one sounded different. There are three types of court music – a’ak아악, dangak당악 and hyangak향악. A’ak and dangak originated in China while hyangak was created locally. In general, a’ak was performed during memorial services or court ceremonies and dangak during palace celebrations. The only a’ak piece preserved to this day is Munmyo Jeryeak, a portion you just heard, and “Boheoja보허자” and “Nagyangchun낙양춘” are the only surviving dangak songs. The musical instruments played in a’ak are special ones that are rarely seen in ordinary court music. Each note is assigned a single letter and the song is played to a consistent beat. Korean traditional music generally features elaborate changes in pitch, beat and melody, but Munmyo Jeryeak is devoid of such embellished elements and instead played in a single tone. At the time of King Sejong, a’ak was played not only during the rituals for literary sages, but also for Jongmyo종묘, memorial services for deceased Joseon kings. The king wondered if it was right for Joseon kings to listen to a’ak in death when they had listened to hyangak, Korean native music, while living. King Sejong’s third son, Prince Suyang수양, who later became King Sejo, must have remembered his father’s question because once he rose to power, he revised “Botaepyeong보태평” and “Jeongdae’eop정대업,” music pieces written for royal celebrations, to make them suitable for Jongmyo ceremonies. Here’s Court Music Orchestra of the National Gugak Center again to play four movements from “Botaepyeong.”

Both “Botaepyeong” and “Jeongdae’eop” are comprised of 11 smaller compositions. “Botaepyeong,” meaning prosperous times, is music that honors the scholarly achievements of the past kings, while “Jeongdae’eop” celebrates their military feats. Joseon’s political philosophy is based on Confucianism, and ceremonial music is an integral part of Confucian philosophy, which puts much importance on order and harmony. The reason King Sejong and King Sejo worked so hard on ceremonial music may have been that they wanted to communicate properly with Heaven and ancestors, and bring harmony to the lives of ordinary people through music. Today’s last piece is “Daechwita대취타,” music played when the king left the palace to host memorial rites. “Daechwita” became widely known when Agust D, the solo name of BTS’s Suga, released a song under the same title. Once again this is the National Gugak Center’s Court Music Orchestra performing “Daechwita.”