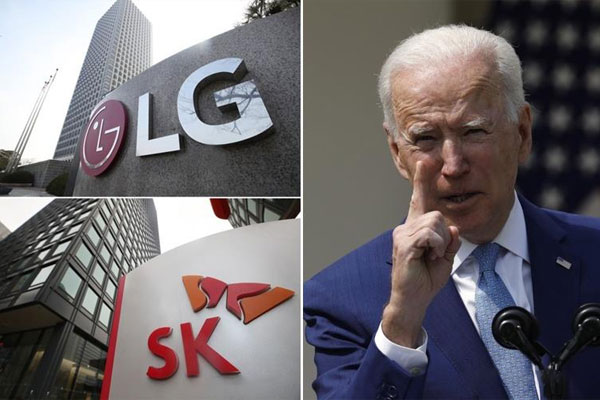 In February, the U.S. International Trade Commission or ITC ruled in favor of LG against SK in a trade secret case. The decision would inevitably deal a blow to the job situation in the state of Georgia, where SK’s battery factory is under construction. Attention was drawn to whether U.S. President Joe Biden would exercise a veto against the ruling. Fortunately, the settlement between the two battery makers came just a day before the deadline for Biden’s veto of the ITC ruling.

Here is researcher Oh Joon-beom at the Hyundai Research Institute to discuss the dramatic compromise between LG and SK and some future tasks that Korean battery makers have to contend with.

The battery fight started in April 2019, when LG Chem, the parent company of LG Energy Solution, filed a pair of lawsuits with the USITC and a U.S. federal court, claiming that SK Innovation stole its battery technologies. SK denied the accusation. It filed a libel suit against LG Chem in Korea in June that year and the patent infringement lawsuits in the U.S. in September.

But the two companies have finally agreed to end the dispute, in the belief that their drawn-out legal fight will only incur huge losses for both sides. They thought that the self-devouring battle would be detrimental to their growth and competitiveness, especially at a time when demand for electric vehicles or EV batteries is exploding and major economies are expanding eco-friendly policies.

If they had failed to reach an agreement, SK would have to shut down two battery factories in the U.S. and to cancel orders that it has already received. LG, for its part, may have had to deal with business risks stemming from SK’s possible move to appeal the ruling or file other litigations.

It is fortunate, indeed, that the two companies reached a last-minute agreement. Their settlement will nullify the 10-year import ban on SK issued by the ITC, enabling SK to complete the construction of an EV battery factory in Georgia and to supply its batteries to Ford and Volkswagen. LG previously announced its plan to invest 4.5 billion US dollars in its battery business in the U.S. Now that SK has agreed to pay 1.78 billion dollars to LG to end the dispute, LG has reduced the financial burden of its new investment. It is also welcome news that the two companies agreed not to fight over technology issues over the next decade so they can concentrate on technological development to respond effectively to the fast-changing battery market.

Media outlets in the U.S. say that the final winner of the settlement is none other than President Biden. Why is the deal between the two Korean companies regarded as a victory for the American president?

The Biden government seeks to create more jobs and strengthen its eco-friendly policy. Thanks to the settlement between LG and SK, the U.S. government has saved an estimated 2,600 jobs to be created by SK’s new factory in Georgia. EV batteries to be produced by SK in the U.S. will also help the U.S. boost its green initiative to tackle climate change. If Biden had sided with SK by overriding the ITC ruling, he might have secured jobs and batteries. But the decision would have threatened the Biden government’s basic stance in protecting intellectual property rights.

The dispute settlement will allow LG and SK to prevent further damage. But the two sides have already been hit hard by the legal fight. It is estimated that they have spent hundreds of millions of dollars on lobbying and legal expenses. The legal battle caused much confusion in their investment plans, as it was difficult to predict the end result of the dispute.

The war of attrition has also threatened the status of Korean batteries. China’s CATL topped the global EV battery market this year, edging out LG Energy Solution. At the same time, automakers in Europe say that they will replace Korean batteries with those produced within the region. Apparently, the decision was affected by growing uncertainties about the supply of Korean batteries. However, the latest agreement between LG and SK has provided momentum to turn the situation around.

The result of the legal dispute would change not only the business plans of LG and SK but the landscape of the global battery industry as well. The elimination of these uncertainties stabilized the market, with share prices of the two companies rising. The agreement is viewed as a positive signal for another take-off of the Korean battery industry, as the two major battery makers will now focus on measures to cope with changes in the global market.

Only LG, SK and Japan’s Panasonic have secured a battery production base in the U.S. The two Korean firms are expected to gain an advantageous position in the U.S. market, where demand for EV batteries will expand.

The global EV battery market is forecast to grow to 160 billion dollars in 2025, up from 50 billion dollars last year, to surpass the memory chip market in terms of size. There were concerns that the protracted legal dispute between the two Korean battery makers would only benefit China, Japan and Europe. With the legal issue cleared now, the Korean battery industry is poised to restart.

In line with the Biden government’s eco-friendly policy, Korean battery manufacturers are expected to explore the fast-growing EV battery market in the U.S. more aggressively. SK plans to expand the Georgia plants by investing additional 2.4 billion dollars by 2025, while LG has a scheme to construct at least two new plants in the U.S. by that year.

China is expanding its presence in the global battery market, while some carmakers plan to produce batteries on their own. For Korean battery manufacturers, it is urgent to improve their image and competitiveness. To promote their image, they need to implement their ongoing investment and delivery plans smoothly. To boost competitiveness, it’s necessary to expand R&D investment in next-generation batteries such as all-solid-state batteries and lithium-sulfur batteries that are safer and have higher energy densities, compared to lithium-ion batteries.

Future industries may have learned a lesson from the legal fight that raised awareness of the need for protecting intellectual property rights. Some say that this battery case will benefit Korean industries over the long term.

The battery fight showed once again that the Biden government stresses the importance of protecting intellectual property rights. It has set a precedent that companies stealing or infringing on intellectual property rights might be expelled from the market. It would be almost impossible for latecomers to steal business secrets of leading companies in order to stay competitive in the market. Companies that already have a technological edge in the global market will be in an advantageous position.

The global industrial landscape is changing rapidly. Governments in the U.S., Europe and China are working with local companies to seize the initiative in future industries. Korean companies should bear in mind that their internal, fierce dispute in the global market will only benefit their foreign rivals.

The agreement between LG and SK should hopefully provide fresh momentum for the Korean battery industry to take another leap forward. The government should also have to draw up a long-term strategy to foster the industry.