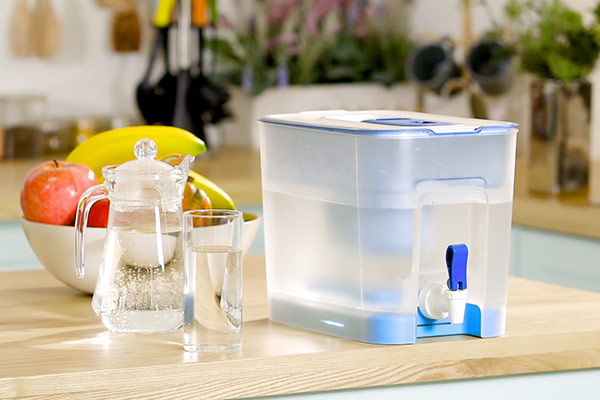 Let’s hear from Kim Young-dug(김영덕), co-founder and CEO of the company.

Co-founded by Professor Park Yong-keun(박용근) from the Korea Advanced Institute of Science and Technology, THE.WAVE.TALK is a producer of new laser sensors. It has been developing a sensor designed to measure water contamination or water quality anywhere, anytime. We plan on bringing the new sensor to the global market this year.

Light is a wave, and any wave sends a signal to us in a particular form when it contacts something. I’d like to describe the phenomenon as “a wave talks to us.” We have successfully analyzed what waves talk about—something people couldn’t understand with existing laser sensors. That’s why we named the company THE.WAVE.TALK.

Researchers began to observe bacteria with microscopes and study their traits between the late 19th and early 20th century. Still, 600 million people around the world are infected with bacteria each year. But even today, the methods of detecting bacteria are not significantly different from 200 years ago.

Founded in 2017, THE.WAVE.TALK challenged this reality. Using the technology of the Korea Advanced Institute of Science and Technology or KAIST, the company has developed a new and improved bacteria detection method. Anyone can easily identify bacteria in liquid medium at affordable prices.

The company and the KAIST research team led by Professor Park jointly developed technology using the principle of the “time reversal mirror.” The time reversal mirror is engineered to make light retrace its previous path, like rewinding the flow of time.

Using this method, we can see many new phenomena. Our laser sensor shines a laser beam through liquid. When the light contacts the water, it moves on a certain path. If it reflects or returns along the same path, it means the liquid is pure. But if the light hits impurities, like bacteria, in the liquid, the impurities interfere with the light to make its path change. The change is detected by the sensor, and the impurities can be analyzed and classified through deep learning.

Before setting up the company, Kim played a major role in developing the lithium-ion secondary battery at LG Chem, which is South Korea’s leading battery maker. Afterwards, he served as an adviser to those who started their own businesses. In the process, he met with Park, a physics professor at KAIST. He was fascinated with the Park’s bacteriological analysis. While researching cancer cells, the professor discovered that the movement of bacteria in a chicken breast changed the course of light reflected on the time reversal mirror. Kim found a great potential in the bacteria detection method using the principle of the light. He took over the technology and began to seek ways to commercialize it. It proved challenging to make the sensor smaller and at lower costs. After hard work, his company unveiled a new sensor that allows anyone to easily check water quality at this year’s CES. 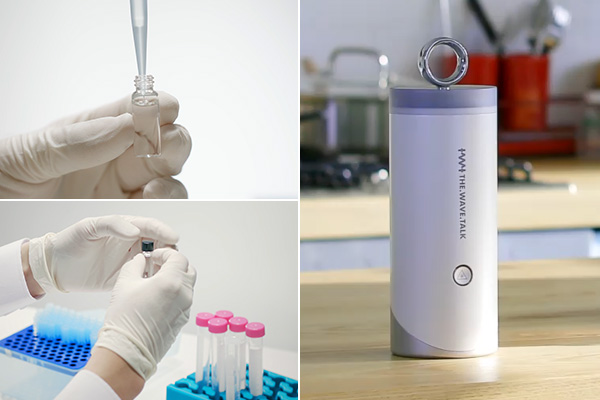 Drinking water should follow strict legal standards, as contaminated water will put countless people at risk. In fact, many epidemics are water-borne diseases. Of course, tap water and filtered water are considered clean in general. But not everything is perfect. Thousands of complaints are made each year. It would be ideal if customers can ensure that their water meets the legal standards whenever they drink it. But existing sensors that measure water quality are exorbitantly expensive, priced at thousands of or even tens of thousands of dollars. We’ve developed a new sensor priced at about 90 dollars. Using the sensor, people can simply check if water in their cup meets the standards, regardless of time and place. We’ll release this sensor for home use this summer.

In the traditional method of detecting bacteria, samples that undergo chemical treatment are tested by experts. The company’s technology, on the other hand, does not require sampling. Users pour water into a cup and put it on the sensor, which can measure the level of water contamination within 10 seconds and relays the findings to their smartphone app.

The innovative technology uses the refractive path of a laser beam. A change in the path after the beam is shot into liquid indicates that impurities are present. With the sensor that identifies any change in the path, people can conveniently check if the water is safe to drink. What is better, the company’s smart, IoT-based water sensor is 100 times less expensive than conventional turbidimeters that cost over 9,000 dollars. This year’s CES gave an innovation award to the company, which has opened a new chapter in bacteria detection. But the company’s product showcased at the CES is just the beginning.

The IoT water sensor has been developed for home use, but it will evolve into a sensor that could be used to manage tap water at public institutions. A water sensor like this can actually be developed into an advanced version of air sensor. Fine dust sensors that are currently available at the market simply show the amount of fine dust. But a new sensor will be able to indentify particular impurities that require more attention. This laser-based sensor can also be used for medical purposes. Also, self-diagnosis equipment could be connected with smart phones, so people can check if they are infected with any contagious disease at home. We’ll raise the level of our technology to realize these visions.

Water is indispensable to producing medicine, cosmetics, food and various semiconductor chips. Even a slight amount of bacteria or impurities in the water will make the products defective. That’s why products that are directly consumed by people, like medicine and food, require thorough management throughout the entire production process.

THE.WAVE.TALK’s technology can be applied to all these areas. Typically, it takes up to five days to confirm whether food is contaminated with bacteria. Using THE.WAVE.TALK’s sensor, however, people can detect any bacteria within six hours.

In cooperation with four local governments, including Seoul City, the company has carried out a test-bed project of using its IoT sensors for the automatic management of water quality. It has raised more than 7 million dollars from domestic and foreign investors. It is also conducting product tests with the purpose of doing business in partnership with global firms.

I think the company is drawing special attention for two main reasons. First, our IoT sensor allows users to measure the level of water contamination at home. This is important, as clean drinking water is an issue of global concern. Second, if the technology is combined with deep learning, super bacterial infections can be diagnosed in a faster and more affordable way. In fact, the U.N. says that infections caused by super bacteria are a more serious problem than global warming. At present, the relevant market is mostly occupied by global companies. As a representative Korean startup, we hope to compete with the global players by developing more efficient, cost-effective devices capable of detecting bacteria swiftly.

A special phrase is written on Kim’s business card. That is, “The Startup Who Saves the Most Lives on Earth.” As indicated in this ambitious goal, the company’s new product, once released this year, will make people safe from bacteria, which claim more lives than cancer.