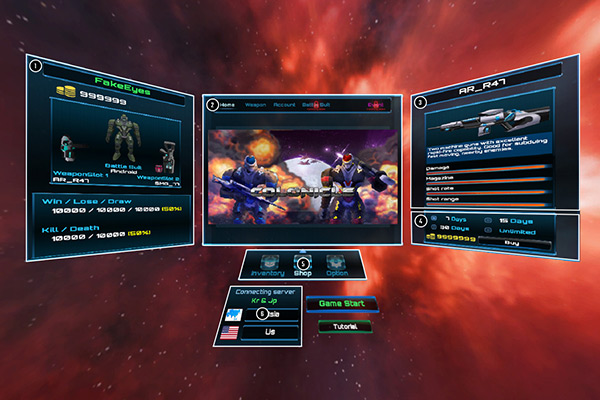 Fake Eyes is a developer of VR games and solutions. Our two signature products are the VR game called “Colonicle” and an educational solution named “ClassV.”

Our focus is placed on mobile VR. In the past, most people used computers in fixed locations. But they are choosing to go mobile more and more these days. In line with this trend, we thought that people would want to enjoy games, including VR games, in a mobile environment. That’s why we focused on developing technology for mobile VR games.

Kim majored in computer science. Thanks to the development of VR technology, he was able to realize his long-cherished dream of developing games.

He focused on VR games, in particular. Compared to 2D and 3D games, VR games provide a unique and engaging visual and spatial experience to allow users to enjoy a great sense of immersion in virtual reality.

Fake Eyes’ VR game, Colonicle, is a first-person shooter or FPS game optimized for a mobile environment. The company concentrated on the development of mobile VR games, which it believed could be accessed by game players more easily, compared to console or PC VR games.

Colonicle can be played on mobile devices, just like other mobile FPS games. But with a click of the button, users can switch over to a VR screen. That is, they can enjoy a thrilling, immersive VR experience as long as they have a mobile phone and a VR device. It also allows multiple users to play the game together and communicate with each other within a virtual space. Using our game, we hosted a VR e-sports competition in Indonesia, the first such event in the Southeast Asian country, and even provided prize money to the winners. Based on this experience, we’re planning on creating a global Colonicle e-sports competition.

Fake Eyes didn’t remain a developer of VR game content. When the Chinese city of Wuhan underwent a lockdown in January to fight the COVID-19 pandemic, CEO Kim predicted a rise in demand for non-face-to-face education services. Having wondered how to use VR technology in this area, his company released a VR-based education platform called “ClassV” in May. Unlike existing remote learning, VR education allows students to feel as if they were really present in the classroom. That’s why VR education is drawing attention as an effective alternative to transcend the limitations of contactless or online learning. Thanks to ClassV, teachers and students can naturally meet in the VR classroom. 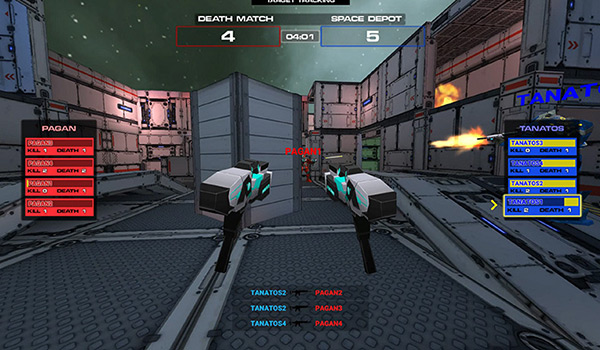 Even amid COVID-19 quarantine measures, education should continue. But we thought video-conferencing programs that were currently available would be inadequate. Apart from studying subjects like math, students in elementary and junior high schools also need to build their character and share their feelings with their peers. For young students, school is a very important period for their emotional development. Having this in mind, we focused on “space.” We wanted to create a virtual space, where children can play and chat with each other.

In ClassV, conversation is possible, and teachers can write on the board. Students and teachers can share images and documents. They can carry out interactive activities using avatars. They can explore the surroundings at any angle in full 360 degrees so they can enjoy an immersive class environment. These are some of the distinctive features of our program, which can ensure children’s right to learn and promote their emotional stability.

On this education platform, up to 40 students can access one classroom. They can attend the class using their personal computers they already have, as long as they wear a VR head-mounted display (HMD), much like wearing glasses. Fake Eyes explains that it is the world’s first VR-based platform for a learning management system. The company was able to use virtual reality in the right place at the right time, all thanks to its technology.

We’ve developed technology to build a mobile VR environment for nearly six years. As a result, we’ve secured highly advanced mobile VR technology and relevant resources. There are only a handful of companies to own such technology in Korea. On the back of our technology, we believe we can explore the global market and expand our business to other areas. We work with Korea Communications Agency and the Ministry of Science and ICT.

We plan to provide our platform to public education providers and the private education market as well. Small private learning institutes are losing students because they can’t afford to provide non-face-to-face education services. We hope that the institutes will use our solution so they can continue to attract students.

Virtual reality, along with augmented reality or AR, is seen as one of the key elements of the fourth industrial revolution. Korea is actively carrying out policies to promote VR and AR industries at the governmental level. The global VR market has grown fast since Facebook released its VR device, Oculus Quest, last year. Riding on this trend, Fake Eyes has set its goal of becoming a leading global VR content provider.

We’ll sell our education solution until the COVID-19 crisis ends and add more features, if necessary. We hope to collaborate with large companies, not just in Korea, but overseas as well. While contacting companies in Indonesia and China, we prepared a roadmap to reach out to consumers in the global market. We’ll follow in the footsteps of global leaders. But we will also add immersive elements to our products so we can differentiate ourselves with something that has not been achieved by global providers yet. This is our goal.

VR technology offers an overwhelming sense of immersion and helps improve the shortcomings of the non-face-to-face environment. Despite these merits, it is not easy to access and use VR technology. Many people still experience VR at exhibitions of electronic products, amusement parks, or game booths of large shopping malls. We hope VR technology will permeate deeply into our everyday life through Fake Eyes.