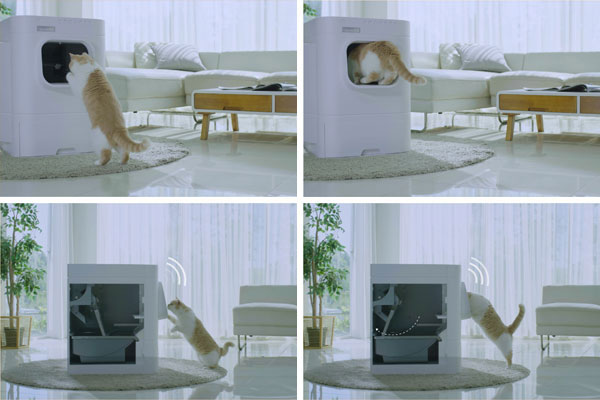 The company was founded in February 2017. Cats purr when they feel happy. Inspired by the purring sounds of cats, we named the company PurrSong in the hopes of creating products and services to make cats happy all the time.

I served my military duty as an officer. At the time, I secretly raised a cat at the Bachelor Officers’ Quarters. Unfortunately, the cat passed away. I was very shocked and heartbroken over the sudden death of my beloved pet. I thought a lot about the health of pets, and I decided to start my own business.

Roh’s dream was to become a robot engineer. He was good at math and science, and he studied in Japan on a state scholarship. After returning to Korea, he served in the military. The sudden death of his pet cat while he was in the military changed his future. He was so devastated that he even considered going to a veterinary school. He wanted to create products that would help keep cats healthy. With this hope in mind, he set up his own firm, PurrSong.

But why a litter box? That’s because Roh found this part most inconvenient but important while raising a cat himself.

Cats are natural carnivores and expert hunters. So, they tend to hide their weaknesses from natural enemies. Puppies whine when they don’t feel food. But cats, even if they are sick, do not show their pain even to their owners. That’s why it’s difficult to find the cat’s disease in the early stage. I wish I had been able to detect my cat’s disease earlier, even though it contracted an incurable disease. But I still feel guilty about finding the disease when it was already too late. Urinary diseases are pretty common among cats, and I became interested in developing a new litter box for cats.

When bringing a cat with a urinary disease to a vet, the owner is usually required to provide necessary information, such as its urinary frequency and volume, to fill out the medical questionnaire. But in many cases, it is difficult to know the exact information because pet owners, in general, cannot watch the conditions of their pets all day long. Also, even if people love their cute furry friend, it is a real hassle to clean the cat’s litter tray and refill it with fresh litter. But this problem can be resolved by PurrSong’s product called “LavvieBot.” It is Korea’s first self-cleaning litter box using the Internet of Things or IoT technology. 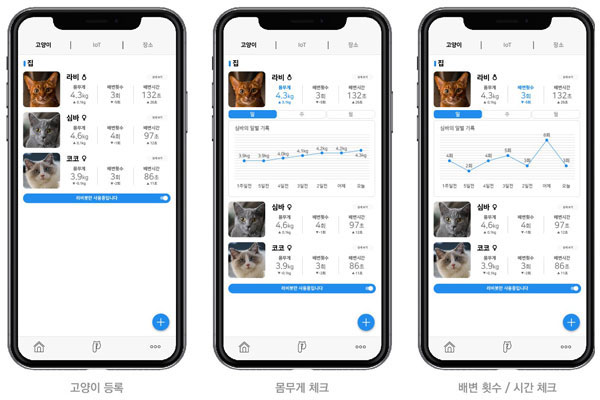 We’ve released “LavvieBot 2,” the second-generation of our litter box. It cleans out the cat’s waste itself and refills the litter automatically so the cat owner can manage it conveniently, and the kitty can do its business in a more pleasant environment. The appliance is integrated with IoT functions, so the owner can be notified of the cat’s conditions in real-time. That is, the smart litter box comes with an app that keeps track of how often and how long the cat uses the box to keep the owner posted on what’s going on with the animal.

So, when a vet asks cat owners if there has been any change in the urinary habit of their pets, they can confidently answer the question with our product. The vet can then make a more precise diagnosis.

The company faced many difficulties in technology development and mass production. The most challenging part was to incorporate different types of litter into the appliance. Litter varies in coagulating, absorbing and deodorizing abilities as well as in weight. That means the amount of refilled litter is different, depending on its types.

But the company was able to find out an optimal method through extensive research and countless tests. This feature proved to be the biggest strength of LavvieBot.

Our product ensures compatibility with various types of litter and automatically refills litter. This is our competitive edge. Conventional automatic litter boxes should be refilled once every two to three days, although they may clean themselves. Our product, on the other hand, keeps itself clean for up to three weeks per cat. So, cat owners using this product can be away from home for a long time. I heard that many pet cats are abandoned during the holiday period. A buyer told us that this device would help reduce the number of abandoned cats. The auto litter refill ability is a very useful and important feature.

LavvieBot has drawn an enthusiastic response both from Korea and other countries. It was highly evaluated by foreign media agencies when it participated in the world’s major IT exhibitions such as the Consumer Electronics Show and Mobile World Congress in 2019. The company also launched a crowdfunding campaign successfully in Korea and the U.S.

The South Korean pet market came to 2.6 billion US dollars in 2018 but is expected to surpass 5.4 billion dollars next year, indicating that the market is growing fast.

The number of pet cats in the U.S. reached 95 million, while there are 10 million cats living in households in Japan. Having challenged this huge market, PurrSong will continue to drive innovation.

LavvieBot 2 can distinguish between multiple cats as long as their weights differ by more than 350 grams. That means you can use one litter box for two or more cats to monitor their health. But it doesn’t work for cats that are similar in weight. We’re working on a cat pendant to enable the litter box to identify different cats, regardless of their weight. We plan on releasing the new product in the first half of 2021. We’ll continue to develop smart pet care services to become a leading provider of health management solutions for cats.

With the number of pet owners rising, a new term “pet-tech” has been coined. The COVID-19 pandemic has prompted pet owners to spend more time with their animal friends at home, and more and more people regard pet dogs and cats as part of their family. In line with this trend, high technologies such as IoT, artificial intelligence and big data are permeating rapidly into pet care products and services. As a leading “pet-tech” company, PurrSong will hopefully create a world where pet cats and their owners are happy together.