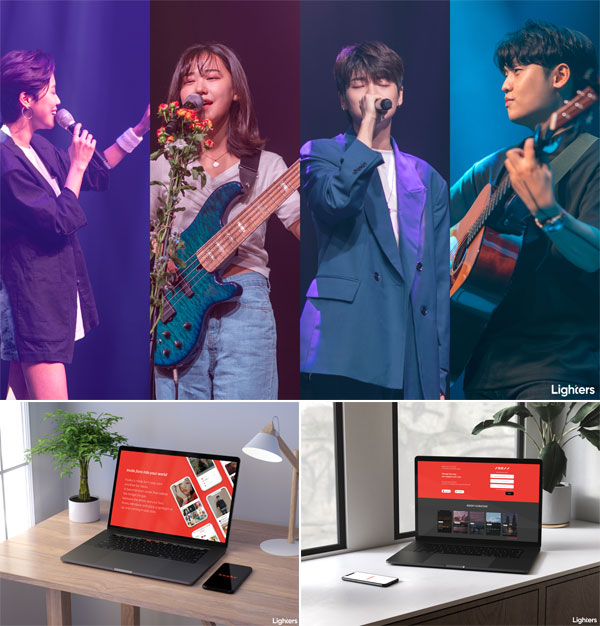 Today, we’ll shed light on Lighters Company that introduces K-pop artists to music fans both in Korea and other parts of the world. Let’s hear from company CEO Kim Ha-mi.

Lighters Company was established in October 2019. Afterwards, it was selected for various startup support programs including “Global Jump 300” operated by the Korea Trade-Investment Promotion Agency and “Global Acceleration Program” by the Korea Institute of Startup & Entrepreneurship Development. The company also won the grand prize at the startup competition hosted by Sungkyunkwan University. All these prove the company’s high potential.

The company name “Lighters” was inspired by the phase “light us.” Music artists and their fans can lighten and encourage each other, and we noted this special relationship between them. We used this relationship in a technical way to create a service called Kooky, a sort of space dedicated solely to artists and fans. Using the service, they can communicate with one another freely.

Ms. Kim herself was an artist who released music albums. She also composed K-pop music at a local entertainment agency. At the time, she found that many of those working in the field of culture and art could not earn profit stably. Worse yet, in most cases, they made their first profit rather late. As a result, artists with great potential often disappeared from the industry even before showcasing their talent properly. Kim was frustrated with that reality.

She seeks to resolve this structural problem of the popular culture scene through a new platform that enables musicians and fans to interact with one another.

The music download markets in Korea and overseas still have structural problems, and rookie musicians find it challenging to take root in the market. Even experienced singers struggle to expose their songs on streaming sites. The situation is much harsher for rookies. No matter how hard they work, they can’t earn money easily if few people listen to their songs because of the lack of exposure of their music on streaming sites. At present, artists find it hard to concentrate only on their music, which is unfortunate. I had a similar experience as well and I wondered how to resolve the problem. We launched the beta version of this platform in the hopes of enabling singers to create their fandom themselves and make profit more easily.

The service developed by Lighters Company is called Kooky. The service creates a virtuous circle, in which fans can directly support their favorite artists, while the artists can secure stable profit and therefore focus more on their music activities.

Connecting artists with their fans, Kooky provides services that are certainly different from those of other fandom platforms. For instance, an artist who has posted his or her song on the Kooky website can receive individual feedback as well as professional consulting services. This is possible because members of the planning and marketing teams of the company all have various experiences in the music industry. Through the platform, a rookie artist was able to seize a greater opportunity and participate in the album production of a famous hip-hop singer.

Artists and fans can communicate with each other in diverse ways, which is another advantage of Kooky. Fans can get their personalized, exclusive message directly from their favorite artists. This feature is drawing an enthusiastic response from music fans.

Kooky introduces K-pop artists to music fans around the globe. This platform brings together K-pop-related stories scattered throughout social media to allow users to view them conveniently. It is a mobile app service that enables K-pop artists to send voice and video messages tailored to their fans individually.

We started an open beta test of the platform last October. We’ve now launched the official version in Korea, the U.S. and Japan. Currently, we work with 50 rookie singers. They understood our purpose and said that it was an amazing app. When they told us that they would be able to build a fandom through our platform, we found our work rewarding. Also, when we saw a music fan leaving a long message spreading out over 60 lines, we found that the fan could deliver what she really wanted to say to her favorite artist through Kooky. We were sure that our service could serve as a new communication channel.

Kooky boasts high technology as well. It provides a real-time translation service so Korean artists and fans all around the world can communicate smoothly beyond the language barrier. In addition, the company has developed AI technology capable of recognizing and filtering malicious comments, which cause artists considerable distress.

We interviewed with artists from the planning stage and we found that they were deeply worried about malicious comments. We worked in cooperation with an AI company and created an algorithm that filters and blocks hateful comments. We planted it in our platform in the hopes of creating a wholesome community where artists and their genuine fans can share their stories without anxiety.

The cultural industry, especially the performing arts scene, had a great deal of difficulty last year due to the COVID-19 pandemic. Lighters Company wondered how to connect artists with fans effectively in the new environment. By preparing for a service that helps performing arts groups and artists explore the online world, it plans on hosting their online, live performances as well as an online fan meeting on its Kooky platform in January.

Lighters Company is aggressively exploring the overseas market as well. It started its service in China and Thailand in December last year, and it is ready to launch the service in Vietnam, Indonesia, Brazil, India, Spain and France within this month. While linking K-pop artists with many more people the world over, the company is also making preparations for the future.

“Next-generation” here has two meanings. First, it refers to the way the next generation consumes or enjoys K-pop. Considering global K-pop fans, who make up a considerable portion of users of our service, we believed we should move beyond the realm of physical meetings between artists and fans, and come up with new forms of get-togethers, even after the pandemic ends. That’s why we offered a more casual form of online communication. Second, we hope to use Kooky to discover new and promising musicians who will lead the next generation. We’ll examine artists who are registered on our platform as well as those we’ve found online. New-generation artists will hopefully break away from traditional production systems, communicate with fans around the world and advance into the mainstream music streaming market that has a high entry barrier, so that many more people can enjoy great music and culture. This is our goal.

Lighters Company has created a new profit model for the K-pop industry. We hope the innovative company and K-pop artists will grow together so the artists who will lead next-generation K-pop can pursue their dreams and passion without restraint.