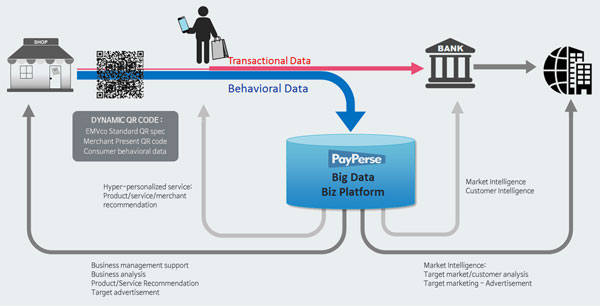 Lee previously worked at a company that developed mobile payment solutions and big data technology. The company’s main clients were banks in Southeast Asia. While facing a challenge posed by the payment system of e-commerce businesses and messenger service providers, the banks wanted a new solution to ensure sustainable revenue. Lee paid attention to this. He floated a business idea that would satisfy stores, payment businesses and banks, and set up his own company, PayPerse.

Mobile payment service providers such as Alipay and Kakao Pay are leading the market. Although they charge no fees, they have grown fast because they collect and analyze data about e-commerce and customer behavior, and use that data for marketing. For banks, on the other hand, payment fees are the main source of revenue. If banks are given a payment solution similar to that of Alipay and Kakao Pay, they can secure revenue to stay competitive. With this belief in mind, I started the business.

Previously, receipts were regarded as mere scraps of paper. But their value has increased lately because people can earn points when they snap photos of their receipts and get them confirmed.

For instance, Korea’s biggest web portal accumulates up to 7,000 won a month if one has his or her receipt authenticated. Indeed, it will be better to “take” a photo of a receipt than to “tear” it away. So, why have receipts become valuable? That’s because they contain much information. Receipts show when, where, what and how people bought. Receipts also reveal who the purchasers are if they have a certain membership, which includes personal information such as gender and age.

But it’s a hassle for consumers and businesses alike to take photos of receipts, get them authenticated and analyze personal information through receipts. Thankfully, PayPerse’s QR code resolved this problem.

The “Dynamic QR Code” developed by PayPerse can store a large amount of information—large enough to accommodate 400 to 500 letters or all the information in a very long receipt. This is clearly different from existing QR codes. Banks are our primary client. Through banks, our mobile wallet and mobile POS solutions are provided to stores and consumers. We share the profits from collecting data with banks. This is our business model. Users can scan PayPerse’s QR code in the same way as Alipay’s QR code.

A QR code, which is a two-dimensional barcode, is used for mobile payment. QR codes have been in wide use since Chinese Internet giants such as Alibaba and Tencent used them for their mobile payment platforms. A bank account and a mobile phone are all the user needs. QR codes can even be used at street vendors. For these reasons, they have already become a popular means of payment in China, Southeast Asia and India. But in the existing QR code-based mobile payment system, customers have to scan a QR code and enter the amount to be paid. Also, a store number and its bank account number are the only information that the QR code has.

PayPerse’s Dynamic QR Code, in contrast, automatically calculates the amount to be paid and delivers it to customers, so it can ease their inconvenience of entering figures themselves.

The Dynamic QR Code also stores information about customers’ orders, membership and others so banks can use the information for marketing purposes and generate profits.

One of PayPerse’s important strategies is to localize services in order to collect precise payment information and create customized profit models that reflect the characteristics of different countries. 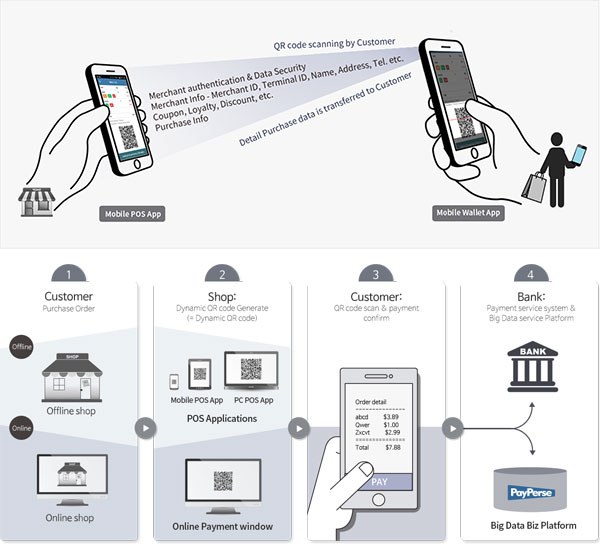 Each country has its own payment system and technology. Even the methods of mobile app arrangement are all different. It’s difficult and costly to manage all the differences here in Korea. If a particular country wants a solution, we develop it in that country. That’s our policy. We’ve established joint ventures with local companies in countries so we can develop solutions tailored to those countries and respond to local customers more quickly and efficiently.

Also, the payment industry is reluctant to open to foreign companies, much less a small startup. If we want to meet banks in a country and propose something to the government, we should use a local company that has a network with the government and financial institutions in that country. That’s why we’ve built joint ventures.

No matter how excellent a particular technology is, it’s not easy to introduce the technology if it does not conform to global standards. PayPerse’s technology meets international standards and also presents a new business model that generates profits. It is seeking to explore banks in many more countries so it can obtain and use meaningful information about developing countries.

Reports released by global market research firms such as IDC, Mckinsey & Company and Euromonitor mostly deal with markets in a few advanced economies, although there are so many developing nations around the world. Results of market research on developing economies, even if they are announced, typically cite annual data released by the World Bank or the Asian Development Bank. Many companies need more precise, detailed and real-time data about developing countries, but in reality, it’s hard to secure such data.

PayPerse can provide accurate information and valuable insight of retail banking in developing countries through the payment data the company has collected and analyzed. I believe this is an unprecedented service. My goal is to nurture PayPerse into a global provider of market intelligence like IDC.

There is an old Korean saying that even if there are many beads, they become a treasure only when they are strung together. That means nothing is complete unless you put it in its final shape. Data could be compared to beads. When it comes to data, the more, the better. But it’s necessary to analyze purchase it properly in order to understand consumers well and meet their needs. Thanks to PayPerse’s QR code-based mobile payment service, people can engage in economic activities in a healthier and more convenient way.