Korea’s Exports in May Post Sharpest Growth in 32 Yrs 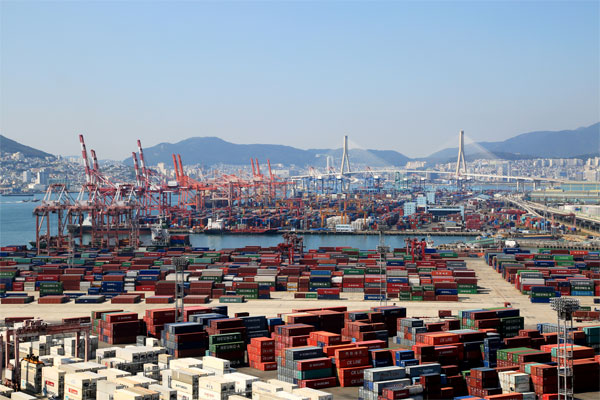 South Korea’s exports have sustained continuous growth for seven months in a row. Export growth in May showed the largest on-year increase in 32 years, with an export volume reaching an all-time high for the month of May. Exports in April and March also hit new highs, elevating the country’s cumulative exports since January 2021 to unprecedented levels. It would be fair to say that the strong performance of South Korean exports has moved beyond the COVID-19-linked base effect.

There are mixed views on the prospects for the future. Some say that such robust exports will help Korea achieve its growth target for this year, while others question whether the positive momentum will continue, as the country is still grappling with the pandemic and must contend with other negative external factors. Here is researcher Oh Joon-beom at the Hyundai Research Institute with more.

Korea’s exports reached 50.7 billion US dollars last month, up a whopping 45.6 percent year-on-year, which represents the sharpest growth since August 1988. Notably, it is the first time that exports have recorded growth greater than 40 percent for two consecutive months, following 41.2 percent growth in April. Despite shorter working days in May than in April, the average daily export value in May surged 49 percent to reach 2.42 billion dollars, the highest since September 2018. It’s a record high for the month of May and the third highest in total.

The stellar performance of exports last month can be partly attributed to the base effect stemming from a drastic decrease in exports in May last year, following the COVID-19 outbreak. Aside from that, global economic recovery has increased demand for Korea’s major export items including semiconductors, petrochemical products and car parts, triggering a corresponding increase in prices. What’s more, Korean exporters continue to be highly competitive in the global market, contributing to the massive surge in outbound shipments.

While Korea’s exports last year mostly depended on a few items such as semiconductors, 14 out of 15 major export items saw their overseas sales increase last month. Among these items, 12 posted double-digit or higher growth and exports of 13 items have grown for at least three straight months.

Exports of semiconductors in particular increased 24.5 percent on-year to log growth for 11 consecutive months and surpass 10 billion dollars for the first time since 2018. Automobile exports rose 93.7 percent, the largest increase in nearly 15 years. And exports of petrochemicals and petroleum products grew 95 percent and 164 percent, respectively. Growth in many export items led to a big increase in outbound shipments overall.

Korean exports to all nine major areas of the globe increased for two consecutive months, the first such achievement in ten years, with double-digit or higher growth in eight of the nine regions. The government predicts that exports will remain strong in the second half of the year, citing positive signals both inside and outside the country.

According to the World Trade Organization, exports of the world’s ten major economies began to trend upward in the first quarter. It’s the first time since the outbreak of COVID-19 that all ten major economies posted positive quarterly growth in exports. Korea’s intermediate goods exports, which reflect investment and production activities of major economies, increased 77 percent in May. This represents a significant increase over last year, when intermediate goods exports fell to negative 43.6 percent. In 2020, Korean exports relied heavily on a handful of export items like semiconductors and bio-health products. But this pattern has been reduced this year, with exports performing well in almost all categories. The booming semiconductor market also bodes well for Korean exports.

The global economy, led by the U.S. and China, is showing clear signs of recovery. Global trade and the industrial output of the world’s major economies indicate an upward trend, with the Purchasing Managers’ Index returning to pre-pandemic levels. But economic recovery is still rather slow in some emerging economies, with India struggling to keep its growing number of COVID-19 cases in check. Speedier vaccine distribution in various parts of the world will hopefully facilitate economic recovery of emerging countries.

South Korea is seeing a sharp increase in its exports of intermediate and capital goods, indicating a rise in global investment and production. With that in mind, the global economic recovery is expected to accelerate further.

Some analysts say that it remains to be seen if this positive trend will continue. Global shortages of key automotive chips, as well as logistics disruptions triggered by a shortage of freight vessels and rising shipping costs, may have an adverse effect on exports. In addition, rising prices of oil and raw materials may also weaken the price competitiveness of Korean exporters.

The Korea Economic Research Institute estimates that exports will increase only 2.3 percent in the second half of the year as the export growth curve begins to flatten out. According to the institute’s survey of 150 local companies, 55.2 percent of respondents expected that exports would decline in the second half of the year. Of those respondents, 44.4 percent cited a decrease in global trade amid the prolonged pandemic as a cause of concern.

Meanwhile, the Bank of Korea’s survey of 3,255 companies shows that the business survey index in June is above 100, which, despite being lower than that in May, indicates an optimistic outlook for exports. I think the conflicting views revealed through these two different surveys may reflect a change in corporate sentiment in line with developments in new COVID-19 infection cases and vaccine rollouts.

Another disturbing aspect is the rapid appreciation of the Korean won. The strengthening of the won will weaken the competitiveness of Korean exporters and decrease their profitability. How should Korea deal with both favorable and unfavorable factors in exports?

Korea’s exports are likely to remain in positive territory for some time, against the backdrop of a rebounding global economy and rising demand. But there are risks as well. First, uncertainties about the pandemic linger. Second, economic recovery is uneven from country to country, and polarization is evident. If the U.S. normalizes its monetary and fiscal policy, emerging economies may slide into a recession. Lastly, it’s essential to factor in the trade war between the U.S. and China and uncertainties about the Chinese economy. If the U.S.-China trade dispute continues and if China’s industrial and export competitiveness worsens, China’s internal issues such as corporate debt, a real estate bubble and shadow banking may emerge as major problems. China is South Korea’s major trading partner, so Korea needs to preemptively prepare for this potential outcome.

Exports have long been the backbone of the Korean economy. The role of exports is important, at least to achieve this year’s target growth of 4 percent. As such, the government needs to support Korean exporters in various ways while formulating measures to promote domestic demand in preparation for a possible decrease in exports.