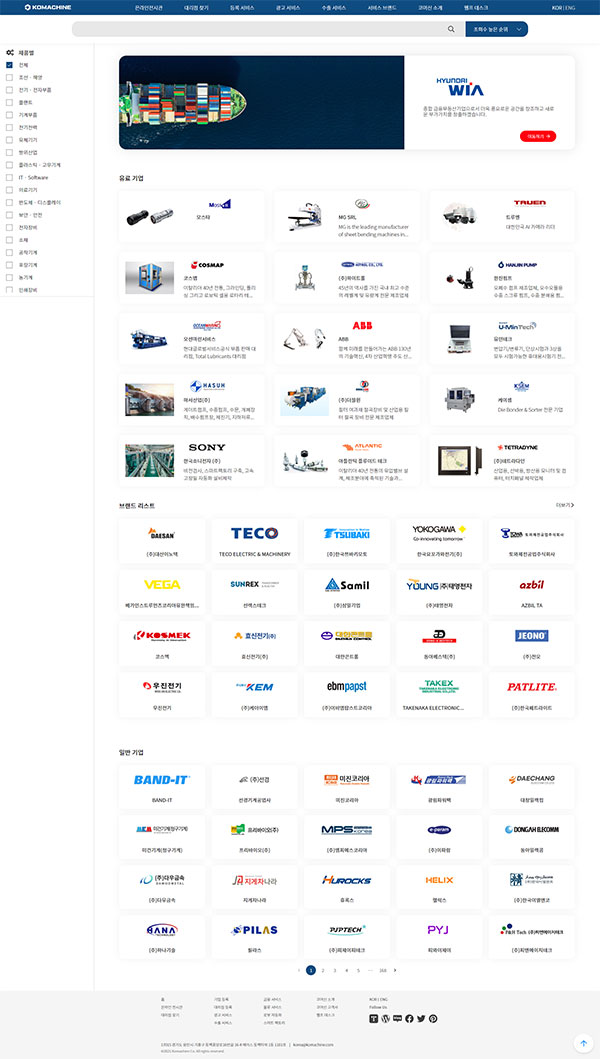 Established in 2017, Komachine operates an online platform for the domestic machine industry, which has been resorting to offline information and transactions. Numerous machinery manufacturers and products are registered on our platform, which connects local suppliers with global buyers. The manufacturers registered in Komachine can carry out marketing activities for overseas buyers and export their products at low costs. They have exported goods to some 90 countries around the world. Global purchasers, for their part, can search and buy Korean-made machinery, equipment and parts easily, quickly and conveniently.

Park attended high school in India and worked as an interpreter at the Korea Trade-Investment Promotion Agency. In the process, he learned about trade and the machine industry. The experience helped him come up with a business model, which was later adopted by Komachine.

The machine industry might be rather unfamiliar to many people. It is an industry that manufactures machines for industrial and home use as well as their parts. Most daily products are manufactured in factories, and this industry produces machinery used for those factories.

Small-and mid-sized firms make up 99 percent of the Korean machine industry. Last year, Korea’s machinery exports reached 47.9 billion US dollars and posted a trade surplus of 28.7 billion dollars. That is, the industry has made great contribution to the Korean economy, with its excellent technology and price competitiveness gaining recognition in the overseas market.

But the local machinery suppliers have exported their products in a restricted way.

Komachine resolved this problem by creating a sort of channel that links Korean producers with overseas purchasers.

The manufacturing industry, which needs machines, comprises a key part of the Korean economy. The annual transaction volume of machinery products comes to about 90 billion dollars, accounting for 5 percent of the country’s GDP. Despite such a strong performance, the industry still depends on offline transactions and information. The industry consists mostly of small firms, and those working in the industry belong to the older generation and they sometimes have a harder time using computers. Moreover, unlike mass-produced consumer goods, industrial products are made to order. Therefore, the process of making the transition to online is very slow in this industry. Komachine remedied the problem.

Major export items include valves, cylinders, motors and electric parts. By region, plant machinery and equipment are exported to the Middle East, where the oil industry has developed, while shipbuilding and packaging machines are exported to Europe and Southeast Asia, respectively.

Komachine divided extensive machinery information into different categories and translated it so buyers can easily purchase what they need. The company proceeds with the entire purchase process for buyers, if necessary. The Komachine platform provides information about 6,600 Korean machinery suppliers in various fields such as construction, medicine, pharmaceutical manufacturing, packaging, machine tools and printing as well as information about 90-thousand products.

Of course, it was far from easy to transform the traditionally offline-based machine industry to online. On the back of its high technology, the company managed to complete the process successfully. The local machine industry can now explore the overseas market through the Komachine platform, which is visited by more than 100-thousand buyers and companies from 150 countries each month.

While dealing with about 1,300 export transactions, we categorized countries, products, purchasers and various other elements, and made data from the collected information. Previously, information on transactions of machines, equipment and parts was completely offline based. But Komachine arranged the atypical data online. We have 13 patents for relevant technology.

Through Komachine, Korean machinery manufacturers can conduct effective global marketing and sell their products in the overseas market, while purchasers all over the world can buy machines and parts produced in Korea quickly, easily and safely.

Also, the company has created a community for the machine industry, the first of its kind in Korea, so experts registered in Komachine offer professional advice when they receive inquiries. As a machine industry platform representing Korea, Komachine has grown significantly year after year.

I think Komachine is the biggest exporter among Korean startups, in terms of industrial goods, excluding games, applications and consumer products. We’ve handled over 1,300 transactions with 90 countries, and 25 percent of the customers are multinational companies. Accumulated exports have surpassed 27 million dollars. It is more encouraging to see the number of global log-ins on our platform and the transaction volume increase more than 10 percent every month.

The local machine industry faced a crisis amid the COVID-19 pandemic, because demand has shrunk significantly worldwide and it was impossible to secure new customers. But the crisis turned out to be an opportunity. Komachine has been able to maintain its sales, with the re-purchase rate exceeding 70 percent, as the company has built trust with global purchasers. Furthermore, online purchase platforms have played a greater role in the pandemic.

Komachine does not focus on its own success only. Rather, it is committed to growing with the local machine industry together. As part of those efforts, it signed an agreement with Yongin City this year to create a new market called “win-win enterprise pavilion” within the Komachine platform. The new market provides information about products of 500 small-and mid-sized businesses that have suffered from difficulties due to the pandemic. Komachine also supports the firms’ online marketing free of charge, in the belief that the domestic machine industry should stay competitive in order for the company to develop into a global platform.

I believe that it is more important to sell things well than to make things well in this era. As the axis of the global manufacturing industry is shifting to Asia, Komachine hopes to move beyond Korea and advance into Asia and the entire world. Its goal is to become a global leader in the field of online machine platforms to secure industrial information in advance and lead the global business.

Small-and mid-sized machinery suppliers in Korea make inroads into the overseas market through Komachine and get due recognition. Through the companies, Komachine is growing into an online platform operator for the global machinery industry, while developing the virtuous circle in the local industry. We’re looking forward to a bright and hopeful future that the company will build.