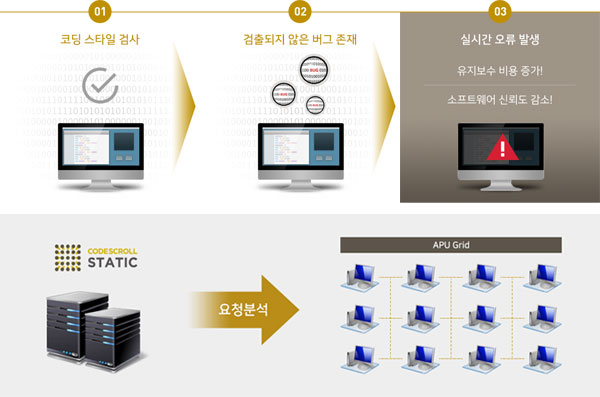 The company name includes the words “sure” and “soft,” which represent our hope to make software more reliable. With more and more industries using software these days, we focus on improving software reliability and making software error-free. To be more specific, we make tools for testing and verifying software used in the mission critical industry, such as vehicles, national defense, aviation, high-speed trains and nuclear energy.

Bae earned a doctoral degree in computer science at the Korea Advanced Institute of Science and Technology when he was still in his 20s, becoming the very first person to achieve the feat. Expectations ran high for the young, talented man. But he chose to set up his own firm, rather than become a professor, because he wanted to verify what he had learned in school in industrial sites and saw huge growth potential of the software verification market. But relevant technology was totally unknown in Korea. Even his academic advisor in school advised him not to start his own business. Even today, the so-called “mission critical” industry is rather unfamiliar. But it is highly important and absolutely necessary to verify the safety of software used in this field.

Mission critical software refers to software used in vehicles, nuclear power stations, high-speed trains and so on. Any error in this type of software may lead to human casualties and even a national disaster. For example, sudden, unintended acceleration problems may occur due to engine or brake failure, and the breakdown of reactor core control software may cause a radiation leakage in a nuclear power plant. Indisputably, mission critical software should operate properly without any bug or error. As software is becoming increasingly complicated, there are limitations as to how human workers can examine software errors thoroughly. We develop and provide tools to automatically test if there is any error in software.

Reflecting the importance of mission critical software testing, the relevant market has already been established globally. But in Korea, very few knew about this area and there was little demand for related solutions. That’s because companies didn’t really feel the need to get software they had purchased overseas verified by a local startup.

But Suresofttech was never frustrated. It continued to focus on developing solutions, in the belief that more software would be developed locally and it would be used more widely in various areas.

The market environment began to change. In the course of arranging the management system of advanced weaponry, the Ministry of National Defense needed to verify software programs. In 2010, Toyota announced recalls of a large number of vehicles for the accelerator pedal problem. The incident propelled Suresofttech forward. Automakers turned to the company because they found it necessary to check any malfunction of automotive software. An opportunity finally arrived for the company that had made steady and persistent preparations.

It’s been 20 years since the company was founded, but it’s been less than ten years since it began to post meaningful sales. Over the first ten years, it only worked on technological development and made investments without generating sales. During the period, the government assisted the company in its R&D investment, as it believed that the technology would be necessary in the future. I think the ten long years of hard work made the company what it is today.

These days, numerous high-tech electric and electronic devices are embedded in cars. Software verification has become an essential part of preventing malfunctions of parts because it ensures safety—the most important element of vehicles. In addition to the automobile area, Suresofttech is developing software verification solutions in other areas as well, including energy, weapons systems, railways and ships.

Software testing is becoming increasingly important in electric vehicles, autonomous-driving, robots, drones and healthcare services. It is easy to imagine that the market has high growth potential.

Apart from its own growth, Suresofttech is wondering how it can contribute to society. As part of efforts to benefit society, the company set up a joint venture called “Sure Data Lab” with Korea Electric Power Corporation. The purpose of the project is to prevent older people who live by themselves from dying alone by analyzing their electricity consumption. If it turns out power consumption falls sharply, a local government agency in the region is notified of the change and urged to rush to the scene. The company plans to expand the business to services designed to check the safety of the socially weak, other than senior citizens.

Suresofttech has also participated in the support program dedicated to victims of traffic accidents since 2000.

The company won the Venture Startup Promotion Merit Award last year to be recognized as an enterprise that implements the spirit of sharing and promotes social value.

Previously, Korea relied on foreign software for the mission critical industry. But more software has been produced locally. Even so, the technology would be imperfect, if software testing and verification technology was not secured domestically. We played a role in this part to achieve technological independence. We’re proud of that. Not many foreign firms have secured as various technologies as ours. I’m sure our technologies can appeal to the overseas market as well. There is no clear world leader in this field of ultra-reliable software. We’ll continue to focus on R&D, apply technology to industrial sites and increase our capabilities so we can become a top leader that is globally recognized in the area of high-reliability software.

Suresofttech is competing with global firms with its software testing solutions it has developed independently using its own technology. It is expanding its presence in the overseas market, making inroads into the U.S. and China. Moving beyond Korea, the company is growing into a global provider of software verification tools.