Economic Effects of BTS’ No.1 Position on Billboard Hot 100 for Four Straight Weeks 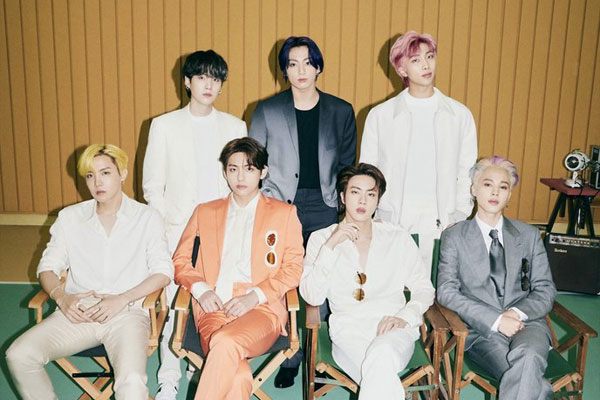 K-pop superstar BTS has broken its own record yet again, with its new song “Butter” ranking first on the Billboard Hot 100 for four weeks in a row, becoming the first Asian act to achieve the feat. Among the 54 songs that debuted at the top spot on the main singles chart, only 13 songs, including “Butter,” stayed there for the fourth consecutive week. BTS is the first group to reach the milestone in the 21st century.

BTS’ global popularity and its success in the mainstream U.S. music scene are well evidenced in its huge economic influence. On top of the K-pop band’s songs, goods related to the band members, including things they promote in advertisements, are selling like hotcakes.

Here is economic commentator Chung Chul-jin to examine how great the group’s economic impact is.

It’s amazing that BTS’ second English-language song, “Butter,” topped the Billboard Hot 100 chart for four straight weeks. Rankings are based on the combination of data, including streaming and download sales. For “Butter,” song sales were more than ten times higher than those of the No.2 song. Previously, some in the U.S. pointed out that fandoms may distort the music chart.

But the trend has changed completely, with fans dominating and leading the music industry. This is one of the things that set BTS apart from other singers or groups.

BTS has now stayed for nine weeks in total at the top of the Billboard Hot 100 chart. It made history last year by becoming the first Korean act to top the chart with its smash-hit single “Dynamite.” In addition, two other songs by the group, “Savage Love” and “Life Goes On,” also ranked first on the chart.

With music charts reacting sensitively to the latest songs, the fact that “Butter” extended its No.1 streak on the chart for four consecutive weeks is all the more significant. This shows that BTS and its song “Butter” have enjoyed steady popularity in the U.S. Behind the success lies BTS’ start strategy.

BTS employed very strategic marketing. Back in 2012, Psy’s “Gangnam Style” remained at No.2 on the Hot 100 for seven consecutive weeks but failed to reach the top. It wasn’t an English-language song, and I think BTS took this into consideration. “Butter” is a full-English song, and its lyrics are actually reminiscent of two major pop icons, namely, Michael Jackson and Usher, to appeal more greatly to an American audience. BTS has also released different remix versions of “Butter,” contributing to increasing download sales and streaming counts compiled by the music chart. The strategy proved effective.

BTS has made an even greater achievement, thanks to its brilliant strategy and its global fan base, which is known as one of the world’s most powerful fandoms. As a result, the group’s economic impact is getting bigger and bigger.

According to a report by the Ministry of Culture, Sports and Tourism and its affiliate Korea Culture and Tourism Institute, BTS’ entry to the Billboard Hot 100 chart last year was estimated to increase Korean exports of consumer goods including cosmetics, food and clothing to 312 million US dollars. An earlier analysis by the Hyundai Research Institute showed that the economic effect to be generated by BTS from 2014 to 2023 would reach nearly 50 billion dollars. In fact, BTS-related goods, in most cases, are sold out upon release.

Reports say that McDonald’s outlets in Indonesia stopped operation temporarily after an overwhelming number of local people flocked to the stores to get the “BTS Meal.” The BTS Meal that includes Chicken McNuggets and two unique sauces is now offered in 49 countries.

McDonald’s previously collaborated with a celebrity and the meal went on sale within the U.S. But now collaborating with BTS, the burger giant sells the meals branded with the K-pop group’s name all over the world. I’m sure global sales of the meals have skyrocketed, although exact numbers have yet to be unveiled. In Korea, the daily average sale of McNuggets jumped a whopping 283 percent between May 27 and June 3, compared to four weeks before the release of the BTS Meal.

The BTS Meal offered by McDonald’s has created a sensation all around the world. It is so popular that the paper packaging, cups, boxes and BTS Crew T-shirts featuring the Korean alphabet worn by McDonald’s staff are selling for way more than they are worth. Fans explain that the packaging of the meal itself is a precious collectible item. It is impossible to keep perishable food, so they turn the imperishable packaging into goods that can be kept.

To capitalize on the huge BTS effect, companies are scrambling to use the band to promote their products.

Once the extremely popular boy band appears in the ad of their products, the companies will surely see an increase in sales and enhance the positive image of their brand as well.

BTS’ management agency is Hybe, which was formerly Big Hit Entertainment. Its market capitalization has exceeded 9 billion dollars. In terms of market cap, it is on the list of the top 40 companies in Korea. When Big Hit Entertainment was listed on Korea’s main bourse in October last year, CEO Bang Si-hyuk became the sixth-richest person in the Korean stock market. At the time, the shares owned by him were valued at 3.3 billion dollars, even higher than those held by Hyundai Motor Group Chairman Chung Eui-sun.

In this way, the fandom culture, which started in the entertainment industry, has now spread to the economy overall to have considerable influence over various areas.

A new word “fandustry” was coined by combining “fandom” and “industry.” These days, fans actively get involved in the relevant industry and even lead it. The Korean pop culture boom is described as the Korean Wave or hallyu. At present, the number of global hallyu fans surpasses 100 million, with the number of hallyu fan clubs nearing 2,000.

According to data from IBK Securities, Big Hit Entertainment’s fandom economy is worth over 7 billion dollars. If the number of hallyu fans continues to rise, the fandom economy will also grow. K-pop comprises the core content of the fandom economy, and Korea will be able to continue to lead the market.

Hallyu could create a boom in various industries. It is hoped that economic players will all give full play to their imagination and creativity so the fandom industry led by BTS will serve as a new growth engine for the Korean economy.