INFINITT Healthcare, a Provider of Medical Imaging and Information Solutions 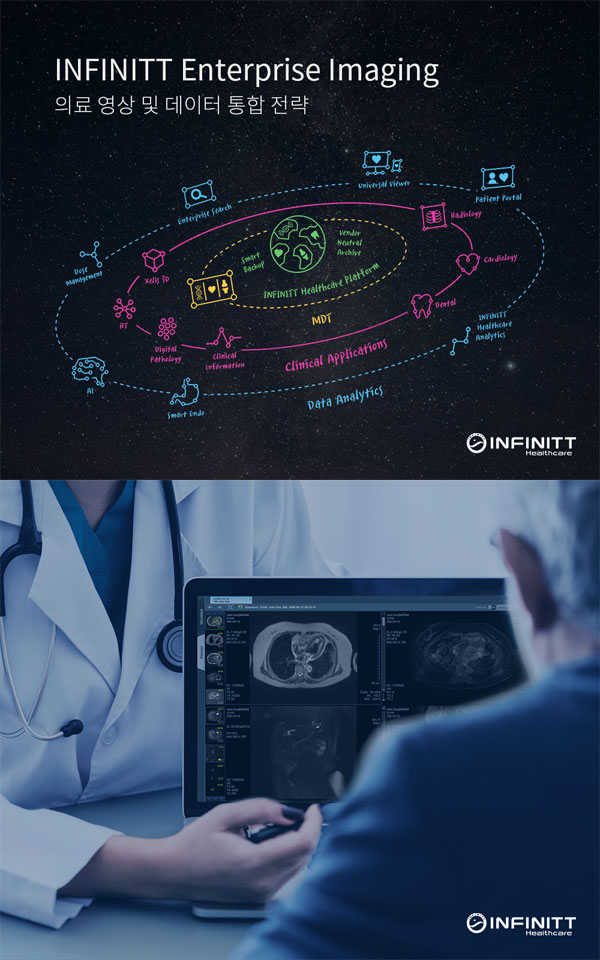 The company has digitalized medical images since its establishment 20 years ago. The company name INFINITT contains its hope to grow further based on endless technological development and innovation. It has developed solutions tailored to various medical specialties including radiology, cardiology and pathology. It has also developed medical big data platforms for the usage of enterprise data as well as big data-and AI-empowered services for data integration at medical institutions.

INFINITT Healthcare is leading the domestic market for Picture Archiving and Communication System or PACS. Many people may have heard of this term. When you have your leg sprained, suspect a bone fracture or undergo a medical checkup, you get an X-ray. The X-ray image is immediately transmitted to the monitor of a doctor, who examines the image to diagnose your condition. It is PACS that comes into play in the process.

In the past, radiographic images were developed and printed on film to be used for diagnosis and treatment. But these days, they are shown in a digital format, which has many advantages. Previously, after patients took an X-ray, they had to wait for a day or two, due to the process of developing and printing the film. But now, they are informed of the test result right away so they can significantly reduce the time for diagnosis and treatment. Formerly, it was difficult to secure the single, original film.

But now, digitalized data can be accessed by any department through the computer anytime, anywhere.

Previously, hospitals needed a large space to store medical films that used to pile up year after year. Also, chemicals were used to develop films, raising concerns over environmental pollution. With the introduction of PACS, however, it is no longer necessary to physically store film and there is no need to worry about the environmental impact of film processing and data management. That’s because PACS digitalizes and archives medical images in a server, rather than keeping them as film.

PACS is more than just medical equipment. The digital transformation of the medical environment enables different departments to collaborate effectively, contributing to enhancing diagnostic accuracy and improving the quality of medical services.

INFINITT Healthcare didn’t stop there, though. It has developed an upgraded medical platform using PACS.

Previously, our main job was to digitalize radiographic images. But we found that not only radiology but other departments such as pathology, cardiology and radiation oncology also need radiological images. All data, including those images, can be digitalized and integrated under one system, and we call this “enterprise imaging.”

To create an algorithm to detect a certain type of cancer in a patient, for example, a far more sophisticated algorithm can be produced if pathologic and radiographic images as well as other information about a patient are integrated for research, compared to when radiographic images are used alone. Formerly, data about a patient were separately stored in different departments, and the disconnected data hindered communication across them.

But our enterprise imaging platform allows doctors from different departments to find patients’ diseases in a more integrated and comprehensive way and to decide on proper treatment through quick, seamless communication.

Using the enterprise imaging platform, doctors can provide treatment optimized for individual patients. Medical big data integrated in this way can also be used to build AI training data. INFINITT Healthcare has actually applied AI technology to PACS to enable doctors to analyze disease risks of patients and their schedules and workloads. In doing so, doctors set priorities when reading the scans, refer to past and current images of the patients right away and swiftly figure out how their conditions have changed.

The company has made remarkable achievements, taking the lead in advancing Korea’s medical environment.

The company was listed on the tech-heavy KOSDAQ market in 2010. It has won the Best in KLAS award for ten consecutive years. Now, it operates overseas offices in nine different regions such as the U.S., Japan, China, Taiwan, Southeast Asia, Europe, the U.K., the Middle East and Brazil. It has secured 6,300 clients in 55 countries. About two-thirds of the company’s annual sales worth 63 million US dollars come from overseas. The sales are sizable for a developer of software for business use in Korea. In 2020, the company received the deputy prime minister award, which is the top prize at the Small and Medium Enterprises Management Award. It was selected as one of the outstanding firms to create jobs.

INFINITT Healthcare is known for its innovative solutions, but its employees are the envy of the workers in the industry because of the welfare benefits provided by the company. The firm selects best staff and gives them a generous reward, like sending them to a foreign country to let them watch a football game there.

The company also offers awards with an interesting title like “Nice Senior Who Buys Me Food,” which is apparently inspired by the title of a popular Korean drama “Pretty Sister Who Buys Me Food.” Programs like this contribute to creating unique group culture that builds up a strong bond among employees. The company also runs its own college to help its workers improve their capabilities.

Despite the difficulty in corporate management amid the COVID-19 pandemic, the company hired more workers, in the belief that investment in human resources will determine the future. Clearly, it regarded the current situation as a great chance to secure outstanding workforce.

We’re creating a culture of “Doing meaningful work with persistence.” What we are working on carries great significance, since it contributes to developing and improving medical services. “Never give up but stick to work and produce results.” This is our goal.

We’ve recently established a subsidiary specializing in investment. It will make investment in medical, IT or bio companies that could collaborate with us and therefore generate the synergy effect. By forming a relevant ecosystem, we aim to expand the local healthcare industry further and explore more overseas markets with home-grown technology.

Multinational companies failed to penetrate into the PACS market in Korea, because INFINITT Healthcare captures the dominant share of this medical software market. The company never settles for the top position in the domestic market but continues to drive innovation. Thanks to the company, the Korean healthcare industry is honing its global competitiveness.