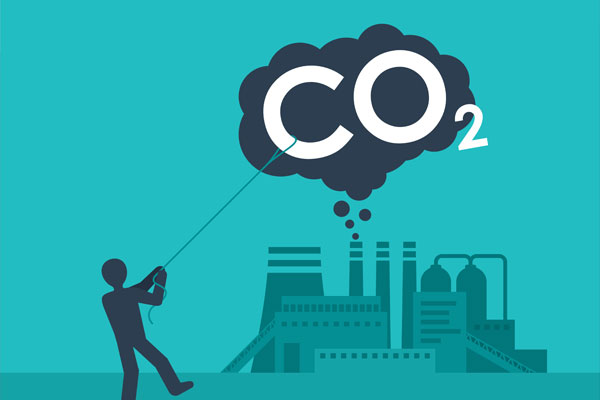 The European Union has announced its plan to introduce the world’s first carbon border tax. Officially called the “carbon border adjustment mechanism,” the measure imposes costs on goods imported to Europe if they emit more carbon than locally-produced ones. It is cited as one of the most effective ways to prevent climate change, but it is also regarded as a de facto trade barrier.

Here is Kim Dae-ho, director of the Global Economic Research Institute, to discuss how the EU’s new carbon tax will affect Korean industries.

The EU’s carbon border adjustment mechanism levies taxes on imported goods that emitted more carbon in the production process than those made in EU member states or goods that will produce more emissions after entering the region. The basic purpose of the measure is to protect the environment by cutting carbon emissions.

Europe has enforced strong regulations on carbon emissions. European companies have produced goods by exploring low-carbon energy sources over the last 20 years, even though it was costly. As a result, their products are more expensive than those produced in a traditional way and they are prone to lose market competitiveness, compared to manufacturers that generate large amounts of carbon emissions. To remedy the situation, at least, the EU seeks to impose a carbon border tax on imported goods.

The European Commission announced its “Fit for 55” package on July 14. The idea is to reduce carbon emissions in the region by at least 55 percent by 2030, compared to the levels in 1990. Earlier, the EU vowed to reach carbon neutrality by 2050. As part of efforts to fulfill the stated goals, the EU has decided to introduce the carbon border tax.

But the introduction of the new tax is expected to deal a blow to the Korean economy because some of Korea’s major export items will be subject to the tax.

The carbon border tax will first be levied on five imported products including steel, aluminum, and fertilizer. The measure is expected to hurt Korea’s steel industry. Given the nature of steel as a high emitter of carbon, steel exports to Europe will result in an enormous amount of tariffs. Of course, steel is not the only category that is subject to the new measure, which will have a direct impact on countries whose industries are carbon-intensive and centered on manufacturing, like South Korea, China, and Russia. The impact on Korea might be less than on China and Russia, but Korea still produces large amounts of carbon emissions, compared to advanced economies.

According to a recent report released by the state-run Korea Institute for International Economic Policy, a tax of 30 euros per ton of carbon dioxide is equivalent to an additional tariff of 1.9 percent. The annual carbon border tax on Korea would then amount to over 1 billion US dollars.

For those five products including steel, aluminum, fertilizer and electricity, manufacturers have to stop producing carbon emissions or reduce them. For that purpose, it is necessary to shift to new energy deployment using hydrogen, electricity, wind or solar resources. But it is not easy to transform the massive, existing energy system into a completely new one within five years. Still, Korea shouldn’t give up exporting goods to Europe, either. It will have to pay tariffs after all. So, it’s urgent for the country to build new renewable energy facilities and accelerate the process of a shift to low carbon or carbon-free energy sources.

On the diplomatic front, Korea needs to persuade the EU to allow an exception for Korea when implementing the carbon border tax, taking Korea’s heavy reliance on manufacturing into consideration.

But basically, it will no longer be easy for Korea to export products if it maintains the current industrial system to continue producing carbon emissions.

Steel and aluminum are among the goods to suffer a direct blow soon. But other industries can’t let down their guard, either. The automobile industry, in particular, is anxious about the new EU policy, which bans the sales of internal combustion engine vehicles starting 2035. For Hyundai Motor, the proportion of electric vehicles is expected to reach a mere 42 percent in 2035. The Korean automaker is required to respond to the situation more quickly and preemptively.

Carbon neutrality is not just a matter of the EU but has become a global trend now. The U.S. says that it will introduce its own carbon border tax in 2025.

The EU has taken action a bit earlier, and the entire world will likely adopt carbon-neutral measures. The U.S. will announce its plan about a carbon border tax as early as August or early September. Korea exports far larger amounts of products to the U.S. than Europe. To continue to sell its goods in the U.S., Korea should regard the carbon border tax as an unavoidable task to contend with. If Europe and the U.S. enforce the carbon border tax, China will have no other option but to follow suit, although it does not consider it for now.

The Korean government has once again expressed its commitment to carbon neutrality, which was added to the “Korean New Deal 2.0” on July 14. Last year, Korea pledged to go carbon neutral by 2050. The recent move is seen as the government’s determination to push for its carbon neutrality policy consistently and efficiently.

Exports have propped up the Korean economy. If the carbon border tax is a major trend that no one can defy, Korea has no choice but to overhaul its industrial system in a way to reduce carbon emissions from the production stage. The existing system cannot guarantee the future. Even now, the government needs to explain to the people that the carbon border tax is an inevitable trend and devise a step-by-step plan about who will share the burden and how to cope with the situation effectively.

Korea aims to go carbon neutral by 2050. It seeks to reduce carbon emissions and explore new renewable energy sources. It has been operating the emissions trading system as well. The carbon border tax isn’t the end but the beginning. It might pose a burden on Korea for now, but the country could turn the crisis into an opportunity if it responds to the crisis properly. It is hoped that Korea will be able to provide a justification of taking the lead in tackling climate change and also secure practical benefits of gaining the upper hand in a carbon-free economy.