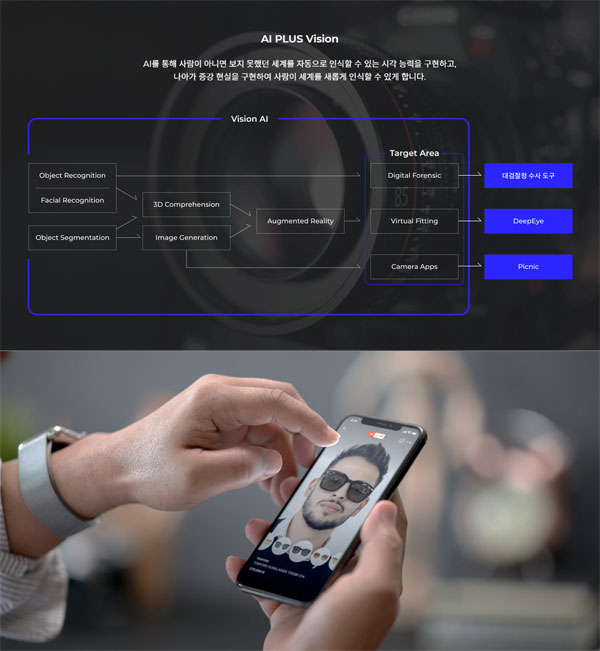 Today, we’ll introduce a company that provides various services based on AI technology, ESTsoft. Let’s hear from the CEO of the company, Chung Sang-won (정상원).

ESTsoft is a company that creates services based on AI technology which can be applied immediately to our daily lives making it more convenient. ESTsoft started as a software company that created a word processor called 21st Century Word Processor in 1993 and became a household name in 1999 with the launch of AL Zip. In 2007, our antivirus AL Yac became a huge hit and we were listed on the KOSDAQ the following year. One of our subsidiaries, ZUMinternet, was also listed in 2019 and we have continued to grow based on our vision to become an AI company. Our philosophy is to change the world through technology for Virtual Human, commerce, fintech, security etc. which is also shown through our business model.

ESTsoft is a software development company that is famous for products such as Al Zip, Al Yak, Al Toolbar etc.

The company was reborn as an AI company in 2016, with the change led by current CEO Chung Sang-won. Chung has a rather unique work history. He majored in math at Seoul National University and entered ESTsoft in 1998 as an alternative to his mandatory military service. In 17 years he became CEO. There are instances where new employees work their way up to head a company, but it is very rare for those who entered a company as an alternative to military service like Chung. Even before the nation was swept away with AI fever due to Alpha Go, Chung designated AI technology as a technology to change our lives and the future growth engine for ESTsoft.

A new era began with personal computers and the internet in 2000 providing new opportunities. Around 2010, the mobile era began with the sale of iPhones, creating the foundation for future innovation. As you can see, we’re noticing the emergence of new platforms every ten years. I see the AI era following the mobile era, which is why our company is focusing on creating services based on AI. When we think of AI, we think of future-oriented technologies like virtual assistants or self-driving vehicles. However, it will take a lot of time for these technologies to be executed. That is why we strive to create AI technology based services that can be implemented immediately, that can make our daily lives more convenient.

Rounz is a shopping app that allows users to get their glasses (and sunglasses) fitted virtually in real-time. These days nearly everything can be bought online, but one area that lags behind is eyewear. Consumers prefer buying glasses or sunglasses offline because they want to try them on. That is why we developed a realistic virtual fitting service for online shopping. You could say that our program tries to make it as close as possible to consumers actually trying on glasses at the store. We launched the service three years ago and the first year, sales only reached one billion won. Now, sales have increased to surpass 60 billion won.

ESTsoft is also creating products that apply AI technology for security. It created technology that can detect and respond to malicious codes through self-learning massive amounts of malicious code data using deep learning and applied the technology to ESTsoft’s security solution. Major institutions that require strengthened cyber security such as the Agency for Defense Development and the Electronics and Telecommunications Research Institute have implemented this technology. ESTsoft is also providing innovative services in the finance and game sectors.

AI technology used on portal sites is focused on searching and providing better search rankings. Users can find documents more accurately if AI technology is used to classify documents according to the keywords users put in and analyze various types of information in the documents. That is why AI is being used to make searching more accurate. For fintech, we created a mobile investment platform called “Vanilla” which makes investing easier and more convenient, especially for the younger generation. We are also managing around 100 billion won in assets. We’ve been involved in the gaming sector for quite some time. We have the game IP, CABAL, which we are in the process of globalizing. This is helping our game business to expand continuously.

ESTsoft is making special efforts for R&D. In 2017, it established an affiliated AI research center and has been holding self-organized AI technology conferences each year. In the process of making bold investments in R&D and creating new growth engines, the company’s finances suffered. However, sales have been steadily increasing for the past few years showing that ESTsoft was not moving in the wrong direction. ESTsoft will continue to walk down that path.

We will continue to invest in the same area to expand our current businesses. Ultimately, we want to become a global corporation. Our technologies, such as Virtual Human and virtual glasses fitting services, mostly have goals to reach people all over the world. We plan to use our domestic success as a stepping stone to become a global company.

ESTsoft is changing our lives for the better through bold innovation. The company is forging ahead towards its goal of becoming the most recognized company for AI based services.