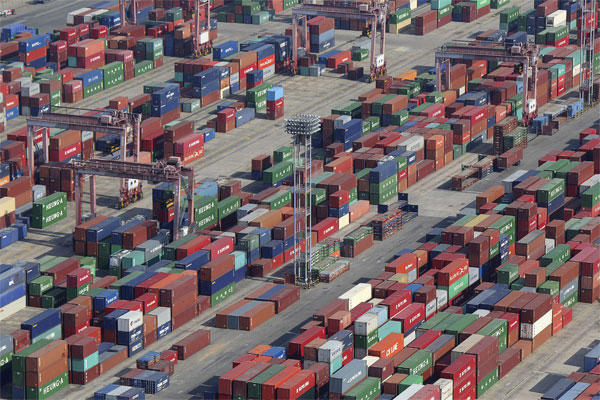 Exports for Korean small-to-medium-sized enterprises (SMEs) have recorded an all-time high during the first half of this year. According to the Ministry of SMEs and Startups, a trend survey for the 1st half of the year showed exports for SMEs amounted to 56.5 billion dollars, up 21.5% year on year. The export volume for the previous two quarters alone is a record high on a quarterly basis.

The news is certainly welcome news amid the continuing spread of COVID-19 and new strains such as the Delta variant. We’ll take a closer look at the figures and support measures for Korean SMEs with Cho Yong-chan (조용찬), head of the Korea-China Economic Research Institute.

SME exports reached $56.5 billion dollars during the first half of this year, showing that exports have fully recovered to pre-COVID levels. By month, exports have been increasing for eight consecutive months since November last year. Exports for the top 20 items which make up 50% of all exports were the driving force, increasing a whopping 27%. The top export items were COVID-19 related quarantine products such as PCR testing kits which were exported to 180 countries around the world. Thus, exports for medical items recorded nearly $2 billion dollars, increasing 225%. Also, as electric vehicles are becoming more popular all over the world, related auto parts exports recorded $2.1 billion dollars, increasing 26%. Semiconductor exports to Chinese-speaking countries saw a 45% increase, recording $1.5 billion dollars. By country, exports to 10 major countries, which account for 69% of all exports, increased by a whopping 19.4%, while all-time highs were recorded for exports to the U.S. and Germany.

Exports overall have increased but the rate of increase for online exports was astonishing. Compared to the same period last year, online exports grew 101%, reaching 77% of last year’s total exports during the 1st half.

The biggest online export items were cosmetics and clothing, showing that Hallyu or the Korean Wave had a positive impact on SME exports. SME exports showed even growth by sector because major economies saw economic recovery in the 1st half.

Exports for the 1st half moved in the V-shape because major export destinations such as the U.S., China and EU showed economic normalization thanks to vaccinations. In addition, Korea’s efforts for the past two years to foster SMEs in materials, parts, and equipment worked as a favorable factor. The world is moving quickly towards digitalization in preparation for the post-COVID era which has helped increase exports of Korean electronics, semiconductors and parts as they have competitiveness.

It seems SMEs have overcome a major hurdle, but it was not an easy process. As they fought their way through the pandemic, their debt grew. According to the Bank of Korea on July 20, as of the end of March, loans taken out by SMEs increased 12.8% on year, in contrast to 7% for conglomerates and 9.5% for households.

We also do not know if we are at the end of the tunnel for COVID-19. As interest rates are expected to rise, it is evident that the interest burden will increase in the future while the economic situation will inevitably worsen due to the recent strengthening of social distancing measures to level 4.

Interest rates for loans at commercial banks have increased nearly 1% in the past 1.5 years. If the shock from the delta variant continues, it could lead to a decrease in consumption and production. As such, a soft landing plan for SMEs’ debt has become urgent. Meanwhile, COVID-19 has caused a lot of damage to the nation’s labor market, as shown by the 26% increase in the number of long-term unemployed. This means that companies are introducing automation equipment or switching industries due to the aging population and rising wages, resulting in a significant decrease in jobs.

The government’s recent announcement to help local SMEs was welcome news amid these difficulties. The Ministry of SMEs and Startups announced that a proposal for the “Local SME Act” passed the Cabinet meeting on July 20. The proposal includes plans to nurture regional companies driving innovation and preferential support for SMEs outside of the Seoul Metropolitan area. The Ministry of SMEs also announced it will help SMEs gain competitiveness sustainably by helping them to respond to the rapidly changing business environment caused by COVID-19.

Although Korea has entered the ranks of advanced economies, it does not have a separate legal system to support local SMEs. Although belated, related laws to promote co-prosperity and revitalization for local businesses will help to establish research centers and financial institutions dedicated to supporting small business owners. The specialized financial institution will help SMEs for funding and management support. The government has been keen on discovering and supporting innovative startups in the parts and materials sector through projects like “Parts & Materials Startups 100.” The new regulations will allow such projects to begin in earnest. Meanwhile, just the fact that infrastructure at the local level will be established will be of great help to SMEs, especially in the event of disasters such as the COVID-19 crisis, as it allows for an immediate response system to operate.

A recent report suggested that the domestic startup and venture ecosystem expanded by 2.8-fold over the past 10 years. The figure is from the Ministry of SMEs and Startup’s “Startup & Venture Ecosystem Comprehensive Index,” which quantifies startup and venture industry trends. Although the figure shows great improvement, it also shows that despite increased government investment, the participation rate and activity by companies remained relatively low.

The Ministry of SMEs and Startups quantified trends for the nation’s business startups and ventures announcing the “Startup & Venture Ecosystem Comprehensive Index.” The index showed that government funds were not being delivered to companies that actually needed them and the funds were not helping to strengthen competitiveness. The index also showed that, unlike the U.S. or China, the overall environment is not friendly towards companies striving for innovation. This is while various licensing and environmental regulations are preventing their growth, leading to their takeovers. As such, I believe if the index is used well, it will show which direction SME support should move towards. Exports are expected to remain strong in the 2nd half of this year. As such, online and non-face-to-face marketing support is urgently needed for promising industries. Meanwhile, it is also necessary to secure ships or containers to handle the increasing export volume and secure raw and subsidiary materials that have run out. The government also needs to provide preemptive measures to shorten the career discontinuance period for the unemployed. In addition, if the latest supplementary budget leads to not only the resolution of logistic difficulties for SMEs but also policy measures to defer principal and interest payments or debt settlement plans, I think these will all help SMEs greatly.

Around 90% of Korea’s businesses are SMEs. Strong SMEs create strong medium-sized companies and strong medium-sized companies make strong conglomerates. This cycle ultimately results in strengthened competition for Korean businesses. We are rooting for Korean SMEs persevering through the COVID-19 crisis and hope they will continue to be a driving force for Korea’s economic growth.