Today’s curriculum places much importance on children’s creative experiences. To help provide such experiences, the Museum of Performing Arts organized an exhibition where children can learn and play at the same time. The National Theater of Korea is a great place to experience stage play production. So children are invited to put on makeup and learn about the principles of stage play by actually taking part in a production.

In theaters there are places for everyone. The audience is seated in the spectator seats, while actors belong on the stage. So it’s only natural that ordinary people are curious about what goes on behind the scenes, before the curtains rise and actors appear on the stage. So the National Theater of Korea decided to show every step of stage play production.

The program started on July 29th and ten rounds are carried out every day with a limit of ten participants for each round. And it’s all free! You get to be the star of a play, free of charge. Here’s Ms. Ha Eullan again. 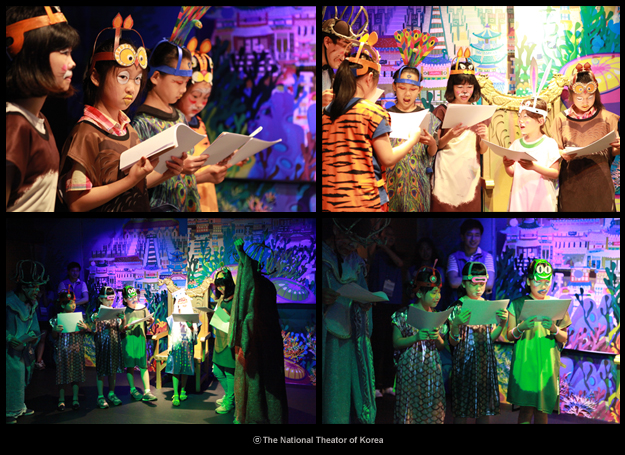 The stage experience program begins with makeup and putting on the costumes. Then the participants get on the stage and act. When they’re finished with the play, they do behind-the-scene interviews as well. They will be doing something related to a mono drama titled “Confession of Red Peter” made famous by the late Chu Song-woong추송웅. The signature of this play is the main character’s monkey makeup. Afterward, they take off their costumes and that’s the end of this program.

There is a special reason why “Confession of Red Peter” was chosen for this program.

This play debuted in 1977 and went on for more than 1,000 runs. It has also drawn the highest number of theater-goers in Korea, and had been invited to Taiwan and Japan. When the Museum of Performing Arts opened in 2009, Chu Song-woong’s family donated all his artifacts. This is the first exhibition in which those donated materials are put on display. Chu is the most illustrated thespian in Korea’s one-person drama. He was a legendary figure in stage play and he had been in numerous works although he passed away at a relatively young age of 44. You can see the artifacts from all the plays he appeared in from the 1960s until the time of his death.

The interactive theater experience program combined “Confession of Red Peter” and Korea’s traditional pansori “Sugungga수궁가” or “Tale of the Underwater Palace” to show how makeup and actors’ roles are interconnected.

Makeup is very important in plays. So we took the character Red Peter, who is the most well-known stage makeup example, and incorporated him into the pansori play “Sugungga.” The makeup for Red Peter the monkey is shown on video. Putting on a wig and a fake beard is included in the video for children to see.

The mono drama “Confession of Red Peter” and Korea’s traditional “Sugungga” were combined to create one interesting script for children. The young participants play the roles of a hare and a turtle from “Sugungga” and they’re given a mission to complete, which is to fulfill the wish of Red Peter. Here’s Ms. Ha Eullan to explain more about what children would be doing.

Peter was originally a monkey, but he was turned into a man. Now he wants to go back to being a monkey again, because now that he’s human, he has too much homework and errands to do and doesn’t have enough time to play. In the original story of “Confession of Red Peter” Peter is captured and put in a cage, where he behaves like a man so that he can be released from captivity, but later becomes his original self to live in real freedom. This story is merged with “Sugungga” and adapted into a children’s play where Peter takes the sea king’s medicine made with a hare’s liver and becomes a monkey again.

It’s hard to complete the entire production within the limited time, so the early parts are shown in video and the young participants take over from there. The first stage of the program involves meeting Peter the monkey. 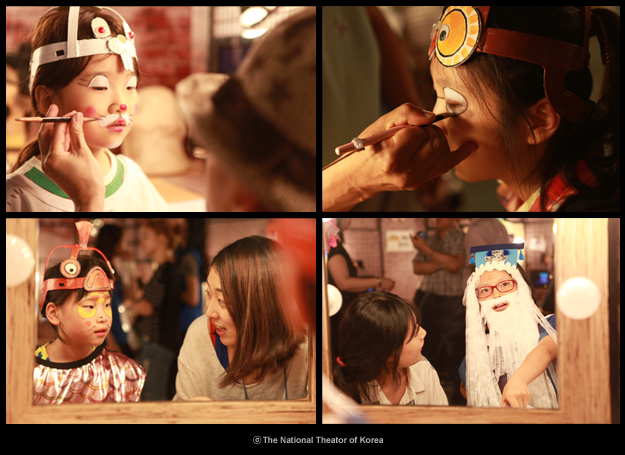 Peter asks the children for help through the video footage.

The young participants now have to act out the part where they get the medicine to turn the human Peter back into a monkey. Since children might fight over coveted roles, casting is done fairly by a drawing.

Now that everyone is assigned a part to play, they get ready to carry out the missions.

When the curtains are raised, the children see a variety of colorful costumes and glittering accessories. They go in search of the outfits and accessories fit for their parts. That’s mission number one.

The participating children look their parts with appropriate costumes on. The sea king looks majestic and Prince Catfish and Princess Carp are elegant and the peacock flaunts its splendid, feathery dress.

(Girl) I’m glad to be playing Princess Carp. It’s pretty. My dream is to become a TV actress.

Now that they are all dressed up, they head out to fulfill their next mission.

The third stage of the theater experience involves putting on the proper makeup. In the makeup room there are rows of colorful products and brushes of various sizes. Children sit in front of the mirrors to turn their faces into the assigned characters.

(Woman 1) My daughter is playing the toad. Her face needs to be painted in blue. Look how my daughter is transformed.
(Woman 2) I’m the peacock, who’s supposed to be a top model. A peacock should look splendid, but it’s not that easy. It’s my first time doing makeup. I’m glad that children have a chance to experience this.
(Woman 3) I’m the fox. I’m satisfied with it. This mustache makes me look like the character. I like it.

Now that all the participants are made up to look like their assigned characters, they’re ready to get on the stage. But are they really? They open up the drawer containing the next mission.

The children pick up the scripts on their way to the stage. Judging from their boisterous voices, they seem excited and nervous at the same time.

In front of the young actors are rows of seats. Although those seats are all empty, the children feel their hearts thumping from sheer excitement. Before they jump into their roles, however, they have a rehearsal to practice their lines and calm down their nerves.

Now it’s time for the curtains to go up! The lighting team illuminates the stage and the sound engineers turn on the music. The director gives a cue and the performance begins.

Their movements may seem awkward and their voices shaky, but the children complete their mission, which is to make Princess Carp and Prince Catfish laugh. As a reward for carrying out their tasks successfully, the child actors get the medicine made from a hare’s liver from the sea king.

But this is not the end of the theater experience program. The children are greeted by a throng of reporters, also played by children, in the interview room. There they see themselves Photoshopped into newspaper and magazine articles. Is this what it feels like to be a celebrity? A little self-conscious, but still enjoying their moments in the limelight, these children enthusiastically answer questions from the reporters.

Once the interview is over, the children head over to the exhibition hall where materials from “Confession of Red Peter” are displayed. This is when they meet the real Peter.

The children are amazed that the strands of hair were attached one by one to turn an actor into Peter the monkey. They came to understand how much work and passion goes into putting a play on stage. With their makeup removed and costumes taken off, the children return to their daily lives, but they will never forget their on-stage experience and perhaps some of them will dream of the day when they will step into the limelight as real actors and actresses.
Share
Print
List