Share
Print
Around this time of the year, when fall semester stars at schools, large bookstores in Seoul are stocked to the brim with study guides and reference materials. But this year book retailers have set up another special section for the hottest topic in town. Here’s Mr. Yu Jae-seok유재석 of Kyobo Bookstore’s Gangnam branch to tell us more.

We have a special stall for books about Admiral Yi Sun-sin and we are getting ready for a separate promotional event for those books. There are about 150 different books about Admiral Yi. In our store we have about ten fiction and a dozen nonfiction books about him. In particular, the most popular are Kim Hoon’s “Song of the Sword,” and the updated versions of the novel “Myeongryang명량,” on which the film “The Admiral: Roaring Currents” and the TV series “Immortal Admiral Yi Sun-sin”are based. Among the top-selling historical nonfiction books, there is “Nanjung-ilgi난중일기” or “Wartime Journal” written by the admiral himself during the 1592 Japanese invasion. Also, Kim Tae-hoon’s historical book “But Yi Sun-sin Was There” is a well-organized work that reveals little-known historical facts.

Bookstores in Korea are busy meeting the soaring demands for books about Yi Sun-sin. The sales of books on the subject of Yi Sun-sin doubled in the wake of the amazing success of “The Admiral: Roaring Currents” which is based on the admiral’s miraculous victory at Myeongryang Strait. 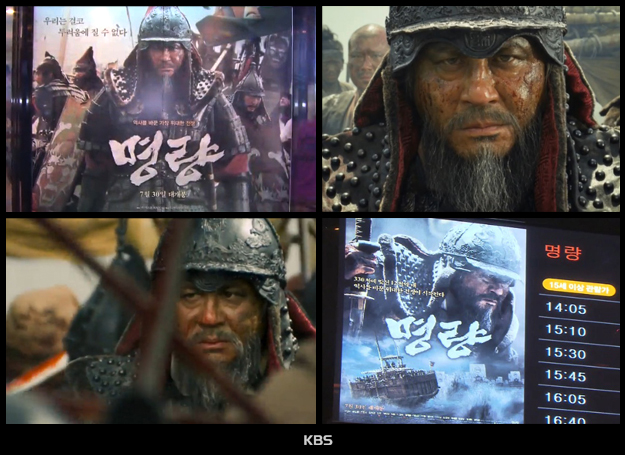 (Woman 1) Books provide more detailed psychological descriptions than movies. I don’t want to know how great Admiral Yi Sun-sin was; I want to know what he thought in certain situations and what beliefs he held. That’s why I’m reading these books.
(Woman 2) The movie “Roaring Currents” is really popular nowadays. But I think I would appreciate the movie better if I had some basic knowledge about the events in it. My knowledge comes from school textbooks, so I think I’ll study up to enjoy the movie more. I haven’t seen the movie yet.


“The Admiral: Roaring Currents” is setting new records every day. There are many firsts and superlatives attached to the movie - the first movie to sell more than 680,000 tickets on the first day of its release, the highest-grossing Korean film so far, and so on. Here’s culture critic Kim Seong-su김성수 to explain.

No other movie drew more people on the opening day. It posted a record high of 687,000 people. The next day the movie broke the record for most ticket sales on a weekday with 700,000. The previous record was 500,000 on a weekday. Then the very next day it topped its own record for weekday sales with 860,000. Then it broke the highest daily ticket sales record on the day after that with an amazing 1.22 million. Previously, 910,000 was the record for daily ticket sales, so just surpassing the one-million mark would have been phenomenal, but it actually drew some 1.22 moviegoers in a single day.

The movie is looking to record 20 million admissions, an unprecedented feat in Korean film history. As of August 24th, it has already surpassed 16-and-a-quarter million in ticket sales, so it probably won’t take too long for “The Admiral” to reach its 20 million goal. The film has also grossed more than 114 billion won or 112 million U.S. dollars as of August 20th. History teacher Seol Min-seok설민석 tells us about some of the reasons for this Yi Sun-sin fever.

The recent series of accidents and unfortunate incidents has hurt the Korean people. We are all in a condition similar to collective depression. Koreans fear what lies ahead in the future. But the admiral was resurrected in the movie to show us the wisdom to turn fear into courage and how to overcome adversities. Now we Koreans have hope and courage to face the future. I think that’s what drove the film’s success.

In the movie, Admiral Yi Sun-sin demonstrated the fact that real courage is facing fear.

(Man 1) When someone asks me about the person I admired the most, I answer Yi Sun-sin. The film was inspiring and entertaining. I think he made it possible for all of us to live in this country as Koreans.
(Man 2) I read about Admiral Yi Sun-sin when I was in elementary school. I remembered him as a brave and awesome hero, and the movie also showed him as a strong leader. I related with a scene in which the admiral showed the spirit of Korea. I cheered at the scene.
(Woman 1) It feels fantastic to see a movie like this, just like winning in the World Cup. It made me pay more attention to the 100-won coin, which has the admiral engraved on one side. Thanks to him, Koreans were able to defeat the Japanese invasion forces. The film made me think more deeply about our ancestors.

Myeongryang naval battle took place in 1597, during the second wave of the Japanese invasion. It’s called a miraculous victory, because Admiral Yi triumphed over 133 Japanese battleships with only 12 vessels.

At the time some court officials were jealous of Admiral Yi, who safeguarded Joseon’s seas against the Japanese invaders and kept notching tremendous victories. They succeeded in framing the admiral as a traitor and he was demoted to fight in the war as a lowly soldier. Meanwhile, Admiral Won Gyun, who replaced Yi as the naval commander of three southern provinces, was crushed by the Japanese navy. Emboldened by the absence of Admiral Yi Sun-sin, the Japanese forces planned to rush up to Hanyang and take over Joseon’s capital city. The Joseon court, scared out of its wits, reappointed Admiral Yi as the chief navy commander.

Although he was betrayed by the king and his colleagues, the admiral again went out to sea, armed only with the belief that a military leader is obligated to protect his homeland.

But when he returned to the battlefield, he was greeted with soldiers unwilling to fight, terrified people, and only twelve ships.

To make matters worse, his only hope, the last remaining turtle ship, was destroyed in a fire. Fear of defeat consumed everyone as the news of the merciless pirate, Michihusa Kurujima, commanding the Japanese fleet traveled to Joseon.

The admiral musters up courage under the worst possible circumstances. The wartime journal entry written on the eve of the Myeongryang battle shows his resolve to turn fear into courage.

September 15th, 1597
Military strategy says “He who seeks death will live, and he who seeks life will die” and “One person defending a strategic point can frighten a thousand men.” These remarks are about us at present time.

So Admiral Yi goes out to fight with only 12 ships under his command. What drove him to believe that he could beat 330 warships with just 12 vessels? Actor Choi Min-sik who played Admiral Yi in the film admits that the role was a hard one. 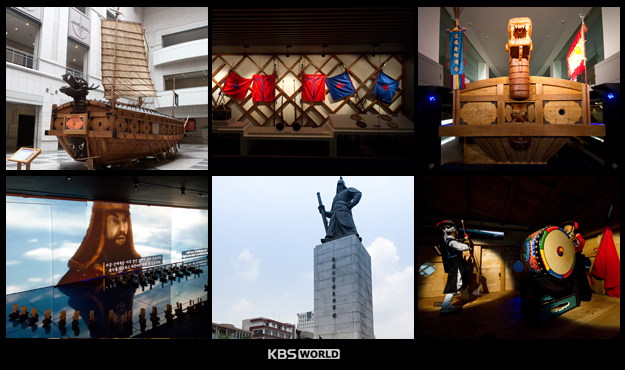 The movie should be about what drove him to battle so relentlessly, but I was under great pressure to portray a well-known figure who had already been featured in many dramas and movies. Actors get overwhelmed when playing actual figures or events. But I was also curious. I only saw how others expressed Admiral Yi, but never thought about how I would deliver his emotions. It was very stressful, but I eventually wanted to portray him.

We call Admiral Yi Sun-sin a hero, but he must have been terribly lonely at the time. His personal life following the Myeongryang battle shows the depth of his loneliness. Here’s history teacher Seol Min-seok again.

His personal life is very sad and moving. The year the Myeongryang battle took place was the worst year for him. He was demoted despite his wartime heroism. He lost his honor and was even tortured like a traitor. Then his mother died on her way to see him in prison. And then he lost his son immediately after the Myeongryang battle. Usually a very stoic man, Admiral Yi wailed when he heard of his son’s death. He was really tormented. That year was very painful for the people, but more so for Admiral Yi Sun-sin.

His personal life was in shambles and the combat situation could not be worse. But in spite of all this, Admiral Yi stood at the helm and led the charge. The other eleven ships stayed behind, afraid of following the admiral’s ship to what appeared to be their certain death. But eight hours later the admiral won the impossible fight in the most decisive manner, not losing a single ship during the clash. It was no wonder the Japanese Navy was fearful of Admiral Yi Sun-sin. History teacher Seol Min-seok explains.

There actually was a Japanese military man who called Yi Sun-sin the best. That was Admiral Yasuharu Wakisaka played by Cho Jin-woong in the movie. Wakisaka was beaten by Admiral Yi at the Great Battle of Hansan. In the movie he is seen just looking on from behind the line. That’s because of the trauma he received from Hansan. He was originally a pirate, but became an honorable soldier. He went without food or water for six days after his defeat at Hansan to analyze why he had lost the fight. But he couldn’t find any answers and ended up saying, “Yi Sun-sin is the person I hate the most, want to kill the most, dislike the most, and fear the most, but he is also the person I want to have tea with and respect the most, even though he is my enemy.”

Admiral Yi Sun-sin was a fearless leader and a loyal commander and a compassionate man who was saddened even by the death of his enemies. Culture critic Kim Seong-su explains.

He was a hero who had lost everything – his health, wealth, and status – a hero who could have died for others. He epitomizes principle and justice. Where does his sense of duty come from? It comes from the people. He said after a victory, “What to do with all the resentment?” This means that he thought of the sad regrets of all those who had died, including the Japanese troops. He had a real love for people and became a hero who was one with the common people.

He was a lone beacon of hope to the Joseon naval forces and ordinary people of the time. Even now people zealously extol Admiral Yi’s fearless leadership. Here’s history teacher Seol Min-seok again.

The admiral was a very demanding person who stuck to principles and standards. He looked after the supplies and a number of his underlings. It’s really troublesome to have someone like him as a boss. Those under his command could have complained and protested, but instead they followed him like a father. Admiral Yi was 53 years old at the time of the Myeongryang battle. Soldiers respected him like their father, because he led by example. He built ships, made salt, shared wine and heard his subordinates’ troubles. His leadership shone brightest when he alone went out to fight while his colleagues stayed back. How could anyone not admire him and not be moved by him? The best kind of leadership is the one that leads by example.

The Myeongryang naval battle is recorded as one of the most dramatic combats in world history. At a time when Korea is still reeling from the ferry tragedy and a subsequent series of dreadful incidents, Admiral Yi Sun-sin presents the model of a true leader and gives us hope and courage.
Share
Print
List