Share
Print
A mother and her child are searching the forest looking for a certain tree. “Is it this tree?” “Is it that tree?” What are they searching for?

Through various games and missions, this mother and child are having fun learning about various plants. They are at the Hantaek Botanical Garden located in Yongin, Gyeonggido Province.

These days, people are exhausted from leading such busy and competitive lives, so finding ways to heal and rejuvenate our bodies and souls is becoming a trend. Perhaps this is why many people are heading out to spend their days at botanical gardens and arboretums. The Hantaek Botanical Garden is Asia’s largest botanical garden, measuring about 661-thousand square kilometers wide. Here’s the garden’s president, Mr. Lee Taek-ju.

There are about 49-hundred different types of plants in Korea and we have on display here about 12-hundred of them because there is no need to show off all 49-hundred different types of plants at a botanical garden. Here we gathered more practical plants – the ones that have blossomed beautiful flowers or are edible by humans or have medicinal properties. The Hantaek Botanical Garden is not only one of the best botanical gardens in Asia, I believe it’s a world-class establishment.

At the Hantaek Botanical Garden, plants are harmoniously displayed across 35 unique theme gardens and eight greenhouses. However, Mr. Lee explains how this establishment didn’t start as a botanical garden. 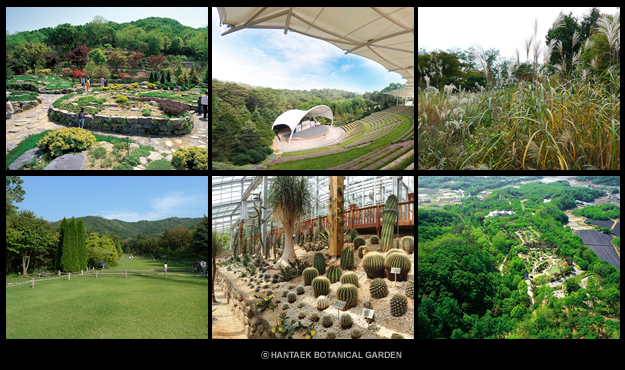 I first started this place as a ranch, but it was not very profitable. So I closed it down and started planting trees. Growing trees was much harder than I imagined so I went to Europe to learn how well-established arboretums and botanical gardens were in other counties. It was such a breathtaking experience, there were a lot of people, trees and plants all throughout the parks. When I came back home, I did some research and found out that Korea was the only country that was a member of the UN, but without a botanical garden. That’s when I knew I had to build this place. But I never imagined how difficult it would be.

After changing the establishment’s name to "Botanical Garden" in 1979, Mr. Lee travelled all over Korea to collect wild flowers. But planting native wild flowers came with its own challenges.

Since I was building a botanical garden in Korea, I thought it was obvious to collect and build a catalogue of native Korean plants first, and then bring in foreign plants. But back in 1979 there were no places to get native Korean plants. No one was growing native Korean flora so I had to travel all over Korea to collect and breed these native plants myself, and it took a very long time. Korea has many very unique plants. Some grow on Hallasan Mountain, some grown on Seolaksan Mountain, some grow in fields, some in swamps… I went to all these places to collect native flora. I’m the first person in Korea to do so.

For 20 years, Mr. Lee has poured his heart and soul into building the best botanical garden. Of course there were times when he wanted to quit, but after a craze for native wild flowers swept Korea, the Ministry of Environment designated Hantaek Botanical Garden as a habitat and preservation center for rare and endangered plants in 2001. In 2002, it was appointed as a national botanical garden and in 2003 it opened its doors to the public under the name Hantaek Botanical Garden.

Because we don’t use pesticides people are able to see many fireflies at night as well as crayfish and white cloud mountain minnow. Botanical Gardens are not just places to display fancy flora, they should be places to observe our eco-system. If we wanted to show off an extravagant array of plants, we would have to use a lot of pesticides. Then there would be no insects or animals or birds here. Our mission is to protect plants, which isn’t to show off their beauty by the beauty standard of humans, but to show off their beauty in a natural eco habitat where insects, birds and animals live in harmony. That’s what a healthy ecosystem is and we’re proud to show it here at this botanical garden.

The Hantaek Botanical Garden is divided into 35 gorgeous theme gardens such as herbs, daylilies, irises, mugunghwas, shrubs, a coniferous forest, medicinal plants, greenhouses, an observatory, and a rock garden. As we approach autumn, the season of chrysanthemums, fall foliage and fruits, the Hantaek Botanical Garden celebrates the season by showing off a beautiful exhibition of autumn ambience. As soon as you enter the botanical garden, to the left is a peony garden. This garden is home to 350 different species of tree peonies and 80 different species of herbaceous peonies from China after an agreement was signed with the Beijing Botanical Garden. In accordance with when the peonies bloom and wilt, the garden has various other plants growing together. So the peony garden displays a variety of blossoms from spring to fall. Across from the peony garden is an iris garden made up entirely of blueflags and Russian irises. If you walk along the pebble road, past the iris garden, you’ll come across a wooden bench at the end of the walkway. This is the perfect location to stop and admire the beautiful autumn ambience.

In the middle of the Hantaek Botanical Garden awaits a grass lawn. It’s about 120 meters wide and eight meters long and on both sides are flower beds that show off the greenness of the lawn. The flower beds contain about 100 different types of flora that harmoniously decorate the lawn. Right now, chrysanthemums are in full bloom. Here’s assistant director Mr. Kim Jin-bong again.

Next to the lawn, there is a place where you can see medicinal herbs used in traditional Korean medicine. There are some rare native Korean plants here as well. Here’s Mr. Lee again.

The Hantaek Botanical Garden was appointed by the Ministry of Environment as a habitat and preservation center for rare and endangered plants. So here we have almost all rare and endangered plant species. The prettiest is called kkaengkkaeng-e-pul, which thankfully is no longer an endangered species. Next, we have a plant called King Solomon’s seal which is commonly used in medicine and a plant called Lizard’s Tail which grows in water. 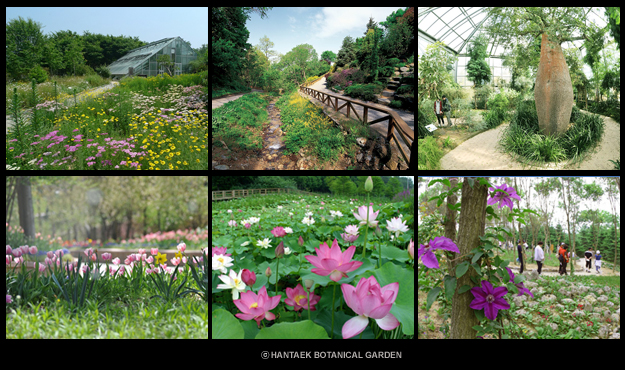 Past the lawn is a hexagon-shaped glass greenhouse. This is the Antipodean Greenhouse measuring 891 square meters wide. There are more than 150 native plant species from Australia and New Zealand. Here’s Assistant Director Mr. Kim Jin-bong to explain.

As you can see it feels quite different here because it’s the Antipodean Greenhouse. Hantaek Botanical Garden hosts the largest collection of native antipodean plants outside of Australia and New Zealand. For example, we have the eucalyptus tree, and the baobab tree, which is the most iconic tree here.

We’ve had this tree for about 13 years now. It’s quite tall and large. You probably won’t be able to see such a large tree in Korea apart from maybe the zelkova elm tree. What’s unique about the baobab tree is that the trunk resembles a fat belly. So another name for this tree is the bottle tree. Not all baobab trees have thick trunks but the Australian baobab tree’s trunk resembles a fat belly because it stores water when it rains in order to survive the dry spells. The leaves are very similar to the willow tree which is how baobab trees are able to survive very long dry spells. This baobab tree is about a hundred years old.

Seasons are completely opposite in Australia. When it is springtime and warm there, it is cold here, so if you visit between February and March, there are so many flowers that bloom and the baobab tree is lusciously green. The bumpy looking Grace tree over there also blossoms thousands of flowers. The Gravillea plant below has very sweet honey. So I recommend visiting the Antipodean Greenhouse between February and March.

Another one of the theme gardens is The Rock Garden, which showcases various rocks and plants. It was first built in 1998 and is Korea’s first Rock Garden. Located in the highest part of the Botanical Garden, it is home to various alpine floras. Near the Rock Garden you can find the Golden Shower Tree that fills the air with a sweet aroma. The Golden Shower Tree, also known as Ghesunamu in Korea, was the subject of a popular children’s song titled Bandal.

The Golden Shower Tree gets a lot of interest from Koreans who grew up singing the children’s song Bandal, looking up at full moons, and imagining a rabbit pounding ingredients in a mortar to make rice cakes next to a Ghesunamu. Although it was proven that there was no life form living on the moon since the landing of Apollo 11 in 1969, many Koreans still imagine a big Ghesunamu tree on the moon. 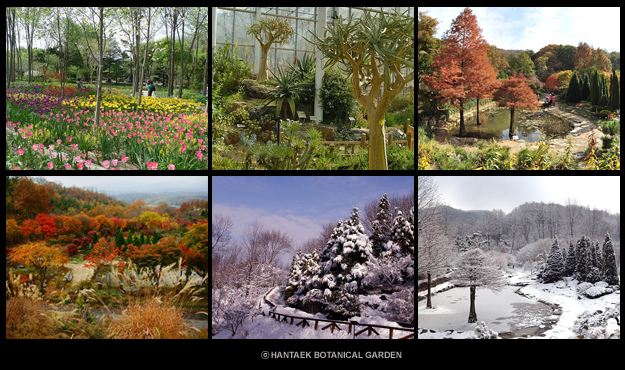 The Golden Shower Tree has heart-shaped leaves. So there’s an old wives tales that if you present a dried leaf from this tree when you profess your love, then one would live happily ever after together. So here, the Golden Shower Tree is also known as The Proposal Tree.

Here at the Botanical Garden, visitors have a chance to experience and learn about the ecosystem. The Hantaek Botanical Garden offers programs for elementary, middle and high school students. They also offer an ecosystem learning program for families that visit on weekends. Missions are given to each family which is a fun way to explore nature together. Here’s head of the Education Program, Ms. Kim Yeon-suk

Every program has a mission. We provide hints about each plant and the families need to find the corresponding plants throughout the garden. Every time a family completes a mission they are given a number. They have to answer quizzes and write poems about the plants and collect stamps, berries and leaves. At the end, we frame all the things the families have collected in the garden.

Although the missions seem easy, it’s quite hard to search the entire park for the correct plant with only a few hints. Also, you need to study in order to answer the quizzes. After all four stages of the mission are complete, you can easily find family members out of breath but congratulating one another for their good efforts. It’s a very rewarding experience.

After spending a day at the Hantaek Botanical Garden, you feel like you’ve become one with nature. It’s hard to leave behind the fresh clean air and floral aroma. Just thinking about the beautiful wild flowers makes one smile. Spending a day at this eco theme park can truly heal and rejuvenate our minds and bodies. Perhaps this is why so many Koreans visit botanical gardens these days.
Share
Print
List