Share
Print
A press conference for the original Korean musical “Tree with Deep Roots” was held at the National Museum of Korea’s Theater Yong on October 7th. The musical about King Sejong’s efforts to create the Korean alphabet Hangeul had been scheduled to open two days later, on Hangeul Day, so a large crowd of reporters came out to show their interest in the performance. Here’s Kim Deok-hee from the Seoul Performing Arts Company to tell us more about the show.

The Seoul Performing Arts Company is a state-funded group that produces and performs original musicals. As a national opera company, we try to develop signature productions that can represent Korea. To mark Hangeul Day and the opening of the National Hangeul Museum, we were looking for a piece that could inform the world about Korea in the long run and came upon a great story, “Tree with Deep Roots,” which we turned into a musical.

Scheduled to run from October 9th through 18th, “Tree with Deep Roots” is based on a historical novel of the same name written by Lee Jung-myung. The plot centers around a string of murders committed seven days before King Sejong’s proclamation of Hunminjeongeum. The best-selling novel has sold more than 700-thousand copies in Korea and has been adapted into a stage play and even a highly rated TV drama. However, being such a hugely popular story worried the SPAC during its attempt to convert it into a musical. Here’s SPAC’s art director Jung Hye-jin. 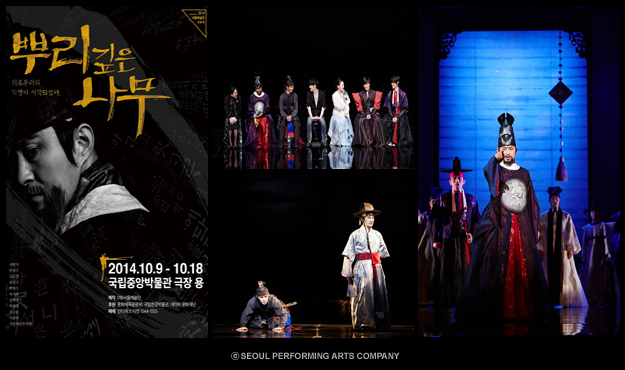 It was such a big hit on TV and a great stage play that we were under pressure to reinvent it. I tried to highlight King Sejong’s love for his people and his concept of democracy. The subtitle to our musical is “Revolution from the Top,” which, I think, aptly describes his thoughts.

The musical’s focus is placed on King Sejong’s reflections about what a king should do for his people and what is truly for their benefit. The show tried to express the very human side of the king, which he displayed during the process of creating Hangeul. Here’s the musical’s director Oh Kyung-taek.

The creation of Hangeul meant more than just making Korea’s own alphabets, but creating a new world like a revolution. I tried to show the human anguish and struggle King Sejong experienced while devising a whole new system of writing. Our focus was on King Sejong the man.

King Sejong created Hangeul to reinvent the world he lived in. So Director Oh Kyung-taek chose the suspense thriller format to add tension to the story. Here’s Kim Deok-hee from SPAC again.

Every Korean knows the story of Hangeul so well that we wanted to add some fresh aspects to it. The story began with the murders of Jiphyeonjeon scholars, who played key parts in Hangeul’s creation. While investigating the murders, we are led to discover the underlying power struggle between the conservative nobility wanting to maintain the status quo and a group of young reformers who wanted to change the world. What do the people really want? That’s the question posed at the end. The show’s main theme runs through a very interesting, suspenseful story, so that the audience is totally absorbed in the musical and moved by its conclusion.

The musical begins with King Sejong’s dilemma. A man died an unfair death and his boss is a nobleman. Punishing the nobleman means giving up his knowledge about Hangeul creation, but letting him off would mean an innocent man would not get justice. The beginning is about the quandary the king faced.

The first scene of the musical is quite impressive, because it needs to show the king’s torment and humanity. He is caught between the need for the nobleman’s intellect and his love for the common people. King Sejong’s predicament and loneliness are further accentuated by the props placed haphazardly on the stage. In order to break through the dilemma, the king decides to create a new set of letters for the common people so that they can communicate their thoughts and feelings. Here’s actor Seo Beom-seok who played the role of King Sejong.

There is a moment when King Sejong decides to make new letters for the common people, a set of characters that’s easy to learn. He thought that commoners couldn’t understand the law written in difficult Chinese characters and that’s why they often committed wrongdoings, while the nobility, knowing the law, escaped punishment. This unfairness stemmed from ignorance, thought the king. The musical emphasized the motivation driving King Sejong’s commitment to make Hangeul. Our show is devoted to the idea of “letters for the common people.”

The musical introduces a new character that was not in the original novel, but plays an important role in solving the murders in the show. Here’s actor Kim Do-bin who plays Kang Chae-yun.

Kang Chae-yun was raised by his aunt, who was a gentleman’s servant, but she dies at the hands of her owner. Thirsting for revenge, he becomes a bodyguard to infiltrate the palace. But he soon gets involved in the investigation of the death of a young scholar, whose body is discovered in a well on the palace grounds. 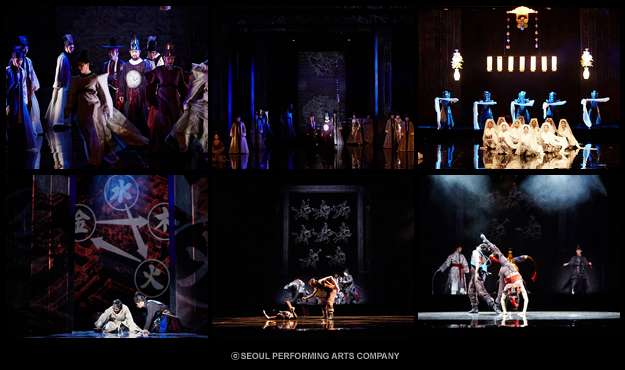 Chae-yun is put in charge of the investigation and starts probing the case with a few clues he got from the victim’s fellow scholars. But another killing takes place in the palace before Chae-yun gets close to the killer.

The only clues left behind are the burnt pieces of a magic square puzzle, tattoos left on the victims’ bodies, and a book that criticized Joseon’s subservient relationship with China.

While looking for the killer, Chae-yun finds out about King Sejong’s secret Hangeul project and from then on helps the king’s endeavor. To represent the project’s secrecy, the two characters of King Sejong and Kang Chae-yun are often shown only in silhouette or separated from others.

The musical is divided into two acts to emphasize the human side of the king, instead of just focusing on his achievement. In the first act, the focus was placed on the meeting between King Sejong and Kang Chae-yun and the king’s dilemma. The second act deals more with the creation of Hangeul.

The story doesn’t just deal with the king’s project, but brings in a new character – Kang Chae-yun. Although he was of lowly birth, he becomes a royal bodyguard and investigates the murders inside the palace. While he looks into the murder cases, he gets wind of King Sejong’s secret. In the second act the murder mysteries are gradually solved, together with the hidden stories behind the publication of Hunminjeongeum and Joseon’s relationship with China. King Sejong’s actual intentions are revealed in the second act.

Conflict rages between two opposing forces. On one side is King Sejong and young reform-minded scholars who struggle to make Hangeul for the good of the common people, and on the other is the conservative nobility and China’s Ming Dynasty that do not want to upset the current state of affairs. A bloody fight with Chinese assassins was inserted into the musical to show the danger the king and his progressive scholars faced.

The fight with the Chinese assassins is the most exciting and dynamic scene in the musical. Many months of hard work went into choreographing the entire sequence. The melee was meant to symbolize the deadly determination of those who opposed King Sejong’s decision and the heavy pressure the king was under. Here’s Director Oh Kyung-taek again.

Hangeul is very scientific, which is recognized by the world and shows the greatness of the Hangeul writing system. But rather than showing the already well-known fact, we tried to show how King Sejong waged a lonely battle against the ruling class that wanted to protect their vested interests and keep their loyalty toward China instead of looking out for Joseon’s common people.

Young scholars from Jiphyeonjeon were the greatest supporters of King Sejong’s project, but not all members of the royal academic institution advocated it. Choi Mal-li, the head of Jiphyeonjeon, was the fiercest opponent of the new writing system. But Choi Mal-li’s protest did not deter King Sejong from taking the project forward with his young supporters. Could the king’s brush-off have embittered Choi and driven him to commit serial killings?

The killer turned out to be one of the young members of Jiphyeonjeon, Shim Jong-su. While everyone’s suspicion was on Choi Mal-li, it was the politically ambitious Shim who made a secret pact with the Ming Dynasty and killed his fellow scholars. That was the big surprise of the musical “Tree with Deep Roots.”

With the murderer caught, King Sejong goes ahead with the proclamation of Hangeul. This is the highlight of the show involving full visual effects. Director Oh Kyung-taek explains.

Hangeul is proclaimed in this scene. The chorus is very majestic and powerful, and butterflies are released to represent the commoners’ sorrow and resentment. Millions of butterflies soar up to the sky through a visual effect.

The butterflies that fly around the stage at the moment of proclamation enter the audience’s hearts as well. The significance of that day in 1446 echoes through ages, taking deep roots in our hearts.

The musical “Tree with Deep Roots” combines historical facts and imagination to highlight King Sejong’s crowning achievement of Hangeul creation. In addition, the musical placed a spotlight on the agony the king suffered during the process. The purpose of “Tree with Deep Roots” was to make today’s Koreans realize King Sejong’s deep love for his people and what a true monarch should do for his subjects.
Share
Print
List