Namdaemun Market is Korea’s first modern marketplace, and it’s also the oldest traditional one. These days, people prefer to shop at larger supermarkets, department stores, and shopping malls. Even though Namdaemun Market is not as popular as it used to be, it’s still Korea’s most well-known market selling just about everything under the sun.

Namdaemun Market got its start in 1414, when King Taejong established a sort of bazaar where merchants rented stores from the state to do business. Here’s culture critic Kim Heon-sik to tell us more about the market’s origin.

In 1414, King Taejong established a cluster of rented stores called sijeonhaengnang in Hanyang, which is now Seoul. The stores were rented by the government in the capital, and that’s how Namdaemun Market was started. By the late Joseon era it was among the three largest markets in Seoul, along with Wunjong-ga in Jongno and Ihyeon in Dongdaemun.

After the six-year war with Japan starting in 1592 and the Chinese invasion in 1636, the people of Joseon had very little to eat and practically no means to make a living. So they began to flock to Namdaemun to sell what little they had to survive. The reason people congregated in this particular area was that Seonhyecheong, the Joseon version of the National Tax Service, was located near Namdaemun. Seonhyecheong was in charge of taxes collected on rice, fabric, and money, and it naturally became the trading hub for local specialties. Namdaemun Market’s geographic location also helped make it one of the biggest markets in the country. Here’s culture critic Kim Heon-sik again. 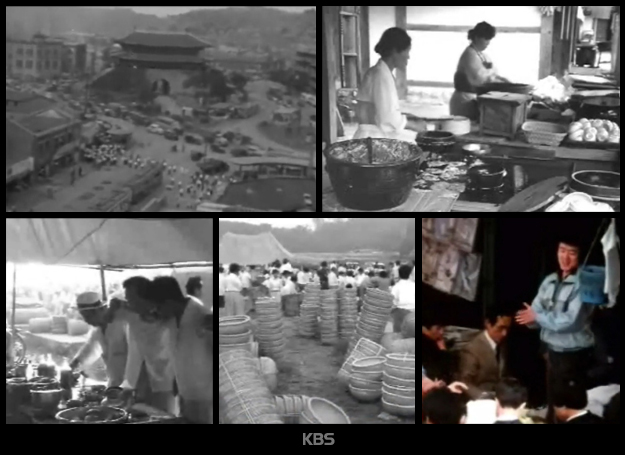 Namdaemun Market’s geographic advantage was that it was located near the Han River. Many different kinds of seafood were supplied from the river’s ports and goods from the three southern regions – Chungcheong, Jeolla, and Gyeongsang – gathered here. Products from all over the country came to Namdaemun Market and were distributed from there. For instance, seafood and salt from Mapo Port were sold to traveling vendors at Namdaemun Market and they traveled all over the city to sell their stuff. Chilpae Market that used to be outside the south gate was relocated inside the city walls in the 19th century and became a part of Namdaemun Market.

When a market called Changnae was established inside the Seonhyecheong complex in 1897, Namdaemun began to resemble a more permanent market.

At first, the market was just an assemblage of temporary stalls. But Changnae Market was established on the storage lot of Seonhyecheong in 1897, allowing more diverse goods to be imported. The site of Changnae Market is assumed to be somewhere between Buildings A and B in the current Namdaemun Market. At that time there were 85 stores in all - three produce stores, 14 rice vendors, 36 fish shops, ten peddlers, and 22 tobacco shops. Different items were sold at different times.

The market was open all day long, bustling with merchants and shoppers. In the early 20th century, when the country was opening up its ports to outside influences, even foreign merchants brought their goods to Namdaemun Market, making it the largest market in Hanyang.

In the 19th century Namdaemun Market became the first modern permanent market, something quite different from the morning market that opened only in early morning hours. As of 1907, 50% of the customers were Koreans, 30% Japanese, and 20% Chinese. At the time Namdaemun Market brought in more than two-and-a-half times the revenue of the city’s second largest Dongdaemun Market. Namdaemun Market was indeed the largest marketplace in Hanyang.

With the opening of the Gyeongin Railway linking Incheon and Noryangjin , followed by the Gyeongbu and Gyeongeui Lines, Namdaemun Market came to serve as a national wholesale hub.

The railway played a crucial role in the growth of Namdaemun Market. Seoul Station and a nationwide network of railways gave strategic transport importance to Namdaemun Market and propelled it to become the heart of commerce. Korea’s modernization helped power transportation and commercial growth, and Namdaemun Market came to further overwhelm its Dongdaemun counterpart both in size and transaction amount.

Advantageous geographic location and progress in transportation means helped transform Namdaemun Market into a bona fide logistics hub. There is a saying that anything can be found in Namdaemun Market except for cat horns, which implies that just about everything that is produced and grown in Korea goes through this market. Here’s Mr. Kim Jae-yong, president of the Namdaemun Market Trader Union to tell us more.

In the past, Korea did not manufacturer that many goods. Most were imported from abroad and there weren’t that many venues where those goods could be sold. That’s why Namdaemun Market became the true logistics hub of Korea. Foreign products imported through Incheon Port and agricultural products from Gangwon Province all came to Namdaemun to be distributed to other parts of the country. Namdaemun Market had even supplied products to department stores.

In the wake the devastating Korean War, items from American military bases or imported goods made it to Namdaemun Market in secret, giving it the nickname “dokkaebi market.” Here’s culture critic Kim Heon-sik again. 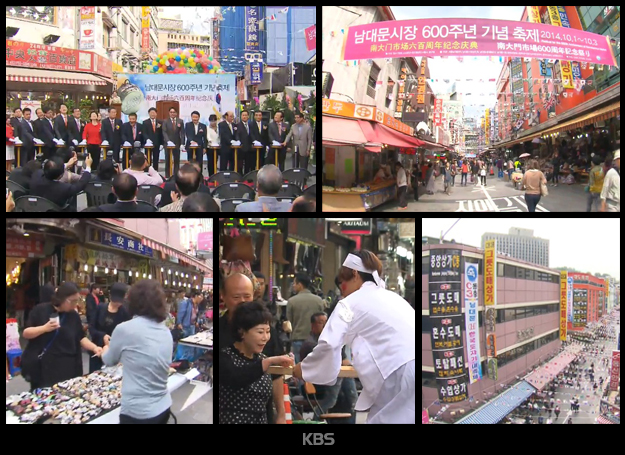 There wasn’t a wide selection of merchandise back then, but a few luxury items and smuggled goods were available in Namdaemun Market. And then when American armed forces came to be stationed in Yongsan, military goods were smuggled out of the bases and into Namdaemun Market. That’s how the market came to be dubbed “Yankee market” or “dokkaebi market.” The latter nickname was given because one could find anything in Namdaemun Market, like a goblin’s magic stick that can conjure up anything, or because the market’s foreign goods vendors vanished in a flash like dokkaebi or goblins at sunrise, whenever the police cracked down on these illicit merchants.

Sadly, the 600-year-old Namdaemun Market, lacking parking spaces and updated facilities, lost many of its customers to nearby department stores. However, it still retains some of its unique charm and its legions of loyal fans.

(Woman 1) There’s nothing you can’t get here and they’re really cheap. There’s lots to see and it’s fun to look around. It’s been a few decades since I came here. Almost all Seoul residents come here.
(Woman 2) Namdaemun Market is timeless. It’s the oldest market in Korea.
(Woman 3) It’s fun to window-shop here. Isn’t it great that you can find almost anything here? I like one-stop shopping and traditional markets.

About 50,000 merchants make their living here and between 350 and 400 thousand shoppers visit the market daily. Add to that total some 10,000 foreign tourists who are dropped off at the market every day and there is not a single day that Namdaemun Market is not packed with people milling about. Once again here’s Kim Jae-yong, president of the Namdaemun Market Trader Union.

First of all, the market has many items that foreigners like. Japanese tourists used to buy dried laver, ginseng, and leather products. These days the Japanese are replaced by Chinese shoppers, whose favorite item is red ginseng. Namdaemun Market is world-famous for its accessories and children’s clothing, attracting numerous shoppers from abroad.

Since the market attracts so many local and overseas shoppers, it is the barometer of actual economic conditions. Here’s Mr. Lee Jae-ho from the Market Economy Division of Jung-gu District Office to explain more.

Namdaemun Market has long been a wholesale market, so rather than targeting retail customers, it has focused on distributing goods through its national network. So if the market is experiencing economic difficulties, it means the nationwide distribution network is suffering the same fate. The market is the nation’s economic barometer, indicative of Namdaemun Market’s importance and status.

When rest of the world is asleep, the streets around Namdaemun Market are crowded with buses and trucks loaded with merchants from all over the country. The frantic pace of the early morning transactions befits the market’s reputation as the nation’s distribution hub. Although Namdaemun Market is largely a wholesale market, ordinary customers can buy things retail at reasonable prices.

Haggling is the norm between vendors and customers. The two finally reach a compromise that’s satisfactory for both parties. Such bargaining is what makes shopping so much fun at Namdaemun Market.

(Woman) I bought some girl’s stockings, boy’s pants, and socks. I didn’t even spend 50 dollars for all this. Other markets don’t have as big of a selection as they do here. Things are cheap here, but don’t look it. I shop here about once a month. They bring in new stuff often, so I come here for the wide selection.

A big shopping bag full of children’s clothes doesn’t even amount to 50 dollars. That’s because Namdaemun Market’s children’s clothing shops design and make their own clothes and account for 90% of the nation’s entire children’s apparel market. No wonder children’s apparel merchants here are all so proud of their businesses. Another must-see stop at the market is the accessory mall. Namdaemun Market accessories are so popular overseas that most of the items are exported. The market also sells materials to make your own ornaments. Here’s accessory merchant Kim Kwang-seok to tell us more.

We export accessories, which are flashy, high quality, and well-designed. Our accessories are featured in fashion shows around the world. I’m selling these items cheaper than usual, at wholesale prices, because of the 600th anniversary celebration and to publicize Namdaemun Market.

Namdaemun Market is also known for its numerous snack stalls and street-side diners. Sweet pancakes with a nutty filling, savory ones with a vegetable mixture inside, and deep-fried donuts tempt passers-by with their irresistible aromas. Namdaemun Market is a paradise not only for shoppers, but also for foodies.

Namdaemun Market has endured 600 years, many wars and even fires, but its greatest challenge might be its competition with larger supermarket franchises. However, Seoul’s largest and oldest traditional market is still making countless budget-conscious shoppers happy with its affordable yet quality goods.
Share
Print
List