“A Coat” by Song Sokz 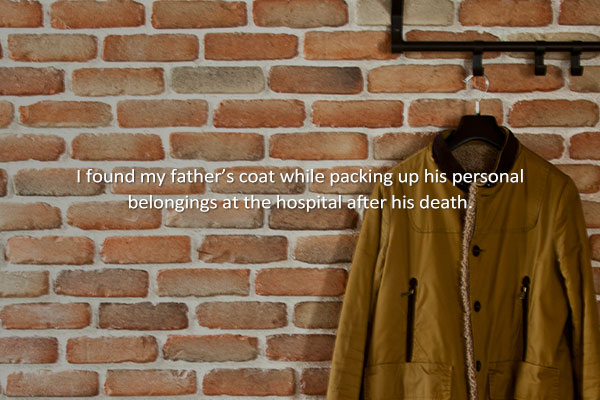 The coat, in the synthetic wood closet with twisted, hard-to-open doors, was kept with his summer grey suit, shirt and sky-blue necktie that he was wearing when checking into the hospital.

The dark brown coat looked heavy. But it was thin and short like a coat for spring and fall, rather than a winter coat.

Following the funeral, the short autumn quickly passed and it got chilly in the morning and evening.

When I was returning to my room, I noticed the coat hanging at the front of the rack. The threads came out again. They stuck out along the re-stitched seam. There were so many threads that they looked like a tangle of fibrous roots growing from a wood.

The coat looked bigger and newer. I felt offended. It looked like a coat suitable for a middle-aged womanizer. Other clothes on the rack looked untidy and crumpled, like a farmer who was beaten down or looted by occupying forces.

Everyone may have such items, which have been possessed and cherished for long and look as if they resemble their owners. In the story, the coat was that kind of item for the father. According to the protagonist, his father rarely took off the coat. So he felt as if the worn-out coat carried his father’s genes. The protagonist was described in the story as a brusque, inexpressive man. That is why it felt more touching when he tried on his father’s coat. Although he was reluctant to admit it, he liked his father. Despite his affection, he could not understand his father. But he wanted to get closer to his late father and his life. So he put on the coat that is filled with his father’s old days.

: Debuted in 1986 with poem “Window Washer” in Munhak-sasang