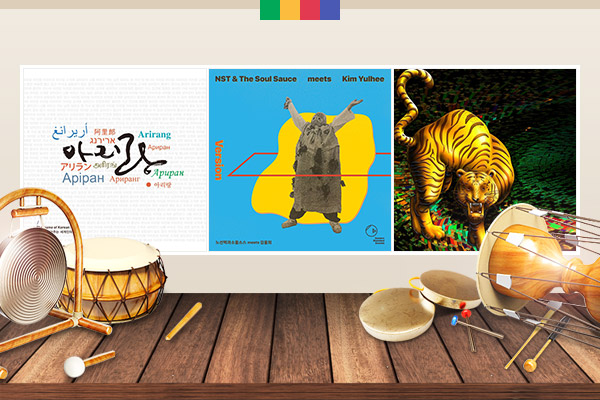 Melody, rhythm and chord are considered as the three basic elements of western music. But Korean traditional music is basically built on only melody and beat. In particular, jangdan장단, the Korean term for beat or rhythm, forms the basis of gugak music and there are many unique jangdan types that are almost non-existent in western music. One of those jangdan is eotmori jangdan, composed of ten beats per movement. In western music most beats are regularly paced, be it slow or fast. But that isn’t so with eotmori jangdan. Ten beats divided into two consist of one group, which is again divided into three and two beats. So one movement goes one-two-three, one-two, one-two-three, one-two. The beat is irregular, lopsided. Gangwondo Arirang강원도아리랑 is a folk song that best demonstrates this beat. So, today’s first piece is going to be Gangwondo Arirang sung by Kang Kwon-soon강권순 with Kim Deok-su playing the instruments. Listen carefully to the song’s uneven beat.

Did you notice how the song followed a rather erratic beat? The fact is that eotmori jangdan is not a beat often used in Korean music. Semachi jangdan세마치 장단 or gutgeori jangdan굿거리 장단 is most often used in folk songs while jinyang진양, jungmori중모리 and jajinmori자진모리 are the staples of pansori songs. But the presence of eotmori jangdan, so out of sync with other rhythms, prompts listeners to perk up their ears and listen more carefully to the song. This is why eotmori jangdan is featured pansori when a special character is introduced. Jungtaryeong중타령, an aria in pansori “Heungboga흥보가” is one such song. After Nolbo kicks out Heungbo’s family out of his home, Heungbo is left completely penniless and with no skills to support his family. He resorts to begging his older brother for some rice, but all he gets is beating from his only kin. When Heungbo and his wife are left in despair, a monk shows up out of nowhere and picks a good place for them to live, a place that would supposedly bring them good fortune. Heungbo ends up fixing a swallow’s injured leg and receives in return magical pumpkin seeds that yield treasure and make him rich. The appearance of that monk provided a turning point for Heungbo, so eotmori jangdan is played for that scene to indicate that the story is going to take an important turn. Now we are going to listen to “Jungtaryeong” from pansori Heungboga sung by Kim Yul-hee with NST & the Soul Sauce providing accompaniment. Try to pick up on the rhythm as you listen to the song.

There is a passage in pansori “Sugungga수궁가” that features eotmori jangdan as well. It’s the part where the tiger comes down to a party. The turtle witnesses a party of mountain animals when he comes up to land in search of a rabbit. Seeing a great number of different animals, the turtle figures a rabbit must be among them. But he mistakenly calls for a tiger instead of a rabbit and the tiger, hearing someone call him in an honorific title, runs toward where the sound is coming from. Imagine how frightened the turtle must have been to see the big, ferocious feline bound toward him. The poor turtle’s shock is expressed in eotmori jangdan. A recent rendition of this passage sung by Leenalchi is quite popular these days particularly among young people and foreigners. But Leenalchi’s version is sung not in eotmori jangdan but in four-four beat. This modern adaptation must have made the song more appealing to those who are not familiar with the traditional Korean beat. Let’s conclude today’s episode with the popular “Tiger Is Coming” by Leenalchi.

Tiger Is Coming/ Sung by Leenalchi