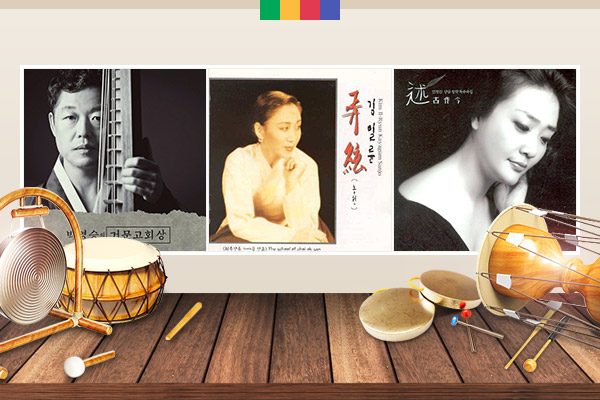 King Sejo세조 made many achievements in various fields, measuring up to the expectations as the son of King Sejong, one of the greatest kings in Korean history. But instead of his accomplishments, King Sejo is better known as the heartless monarch who wrested away the throne from his young nephew, King Danjong단종, and his followers. The six officials who were killed by King Sejo for keeping their loyalty to the young king are called “sayukshin사육신,” meaning the six dead officials. Among them were Park Paeng-nyeon박팽년 and Seong Sam-mun성삼문, whose homes each had pine trees they planted themselves. Those trees survived the purges of their owners but when King Danjong and the framed officials who were executed back then were restored some 300 years later, the trees died as if they had done their duty of defending their owners’ honor. The trees’ death was witnessed by a Confucian scholar named Seong Dae-jung성대중 during King Yeongjo’s영조 reign. He took lumber from the trees to make a geomungo which he named “ssangjeolgeum쌍절금” in honor of the two officials’ integrity. The instrument sounded so clear and powerful that it seemed to contain the spirits of the two loyal scholars. Geomungo has long been admired as the instrument of seonbi선비, so today we’ll start off with a geomungo piece. Here is geomungo musician Park Young-seung and piri player Lee Seung-hun performing Sangnyeongsan상령산 from Yeongsanhoisang영산회상.

Geomungo strings are thicker than those of other string instruments. Also, a player doesn’t use his fingers to play the instrument, but a bamboo stick called “suldae술대.” A suldae strikes the strings to make the powerful and resonant sound distinctive of geomungo music. Perhaps this characteristic has made geomungo the instrument that symbolizes seonbi’s integrity and spirit. It was natural for Confucian scholars of the old to have basic knowledge about music and the ability to discuss various musical theories. Some scholars were so into music that they not only were virtuosos but also composed music or made their own instruments. Scholar and poet Yun Seon-do윤선도, known for such poems as “Eobusasiga어부사시가,” was one of them. He loved playing the geomungo and one day he came across an old gayageum. He found it scorched in a place leaking with rainwater, so you can imagine how awful that gayageum must have looked. Even its bridge was half gone but when Yun Seon-do cleaned it up, it made the best of the sound. Yun wrote a song about it, but unfortunately the melody got lost over time with only the lyrics surviving to this day. The song describes how the gayageum made an ice-like sound that resonated in the woods. Let’s listen to the jajinmori자진모리 part from the Choi Ok-sam-style gayageum sanjo piece performed by Kim Il-ryun.

Late Joseon scholar Hong Dae-yong is widely known as a connoisseur of music whose his interest lied in not only geomungo but other instruments as well. When he went to China as a diplomatic envoy, he studied the structure of a pipe organ he saw in a Catholic church and claimed that he could recreate it if someone funded him. Joseon diplomats who frequented China back then often brought back a trapezoidal string instrument called “yanggeum양금.” Unlike geomungo or gayageum that uses strings made of silk threads, yanggeum had metal strings, the sound of which did not go well with Korean traditional music. But Hong Dae-yong started studying the yanggeum and his dear friend Park Ji-won documented the process in detail, down to the date and time. The yanggeum was later played in various entertainment establishments in Joseon. Today’s last piece is going to be a creative yanggeum piece titled “Aeryeon애련” or “Compassion” performed by Jeon Myeong-sun.