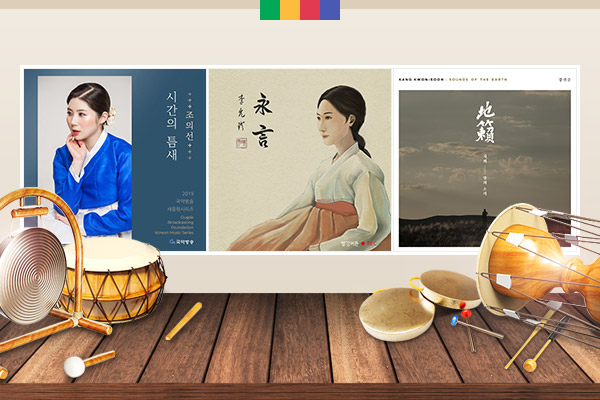 Korean traditional music is largely categorized into two types – jeongak정악 or court music and folk music. Jeongak was usually performed during court ceremonies or for the entertainment of Joseon noblemen and seonbi선비 while folk music was enjoyed by ordinary people in their daily lives. Jeongak tended to be slow in tempo as it targeted people who had the luxury to spend time to appreciate music. Also, people of high status thought it was undignified to show their emotions, so they remained quiet and unresponsive when listening to music. On the other hand, ordinary folks who were busy making a living did not have the luxury of leisurely enjoying music. So folk music tended to be quite fast in beat and expressive. Today, we’re going to listen to a few jeongga정가 songs. There aren’t that many singers who can sing slow jeongga in this fast-paced modern society, but recently there have been attempts to make jeongga more appealing to the masses by playing western instruments for jeongga songs and singing them in chorus. The jeongga songs we have prepared today are those new and modernized ones. The first one is about a man praying to the Big Dipper to delay the sunrise because he has to part with his loved one when the morning comes. Here’s Cho Ui-sun singing “An Early Morning Letter” accompanied by geomungo virtuoso Shin Ji-hee and pianist Jeong Sin-hye.

This song used to be sung with all the traditional orchestral instruments like gayageum, geomungo, daegeum, janggu et cetera. Jeongga songs can be divided into three categories - gagok가곡, sijo시조 and gasa가사. Gagok and sijo are poems set to melodies while gasa refers to a song type that has more words than sijo. Gagok songs are strictly formal, usually accompanied by traditional orchestral music, while sijo and gasa songs are more casual, played with only simple woodwind instruments such as daegeum or haegeum and, in some cases, only with a janggu to keep the beat. Coming up next are two sijo songs based on a poem written by Hwang Jin-yi, a famous gisaeng from the mid-Joseon period who was known for her exceptional artistic talent. The first song is titled “Honorable Byuk Kye Soo벽계수” which features a Confucian scholar who wanted to befriend Hwang Jin-yi. It is followed by a love song titled “A Long Winter Night.” “Honorable Byuk Kye Soo” is sung by Lee Yun-jin and the saenghwang played by Kim Su-yeon while “A Long Winter Night” is performed by geomungo musician Jeong Dae-seok and sung by jeongga ensemble SoulJigi.

Next up is a gasa song newly arranged into a song titled “Song of Suyangsan수양산 Mountain.” Suyangsan Mountain was the backdrop of a well-known Chinese anecdote about Baek-yi백이 and Sukje숙제, who were princes of a small state belonging to the ancient Chinese kingdom of Shang. They refused to claim the throne once the king passed away, instead opting to wander all over the country. When they heard that the king of the Zhou kingdom was invading Shang, they refused to eat crops from Zhou and lived as hermits in Suyangsan Mountain before starving to death. So Suyangsan Mountain is often used as a metaphor for integrity and loyalty, but that is not how the location is depicted in this song. The mountain location is used as a background for a grand celebration enjoyed with plenty of wine under the bright moonlight. Today’s version is sung by Kwang Kwon-soon.