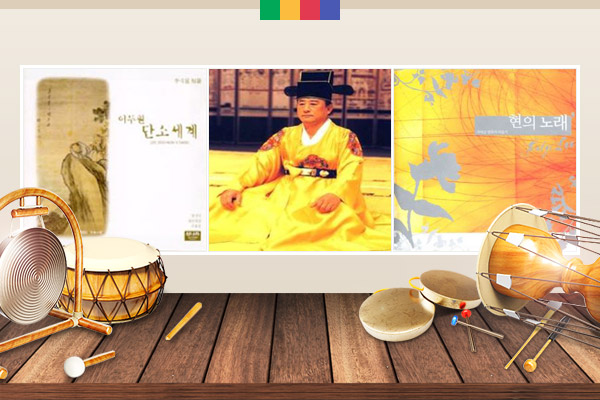 Koreans are known to be one of the hardest working people in the world. But they also love to have fun. An ancient Chinese historical record describes the Korean people as a fun-loving people who dance and sing for days on end at festivals. This must have looked peculiar enough to the Chinese people to put it in their history book. There is a blanket term for the Koreans’ merry-making – it is called “pungryu풍류.” When someone is called a man of pungryu, he is considered a cultured man, whereas a man who doesn’t know pungryu is derided as a petty and crude person. The term “pungryu” originated from an indigenous philosophy of Pungryudo풍류도, in the likes of Confucianism, Buddhism and Taoism. The word consists of two Chinese characters meaning wind and flow. So the term refers to letting our lives proceed naturally, much like the way water flows and wind blows, instead of exerting effort to force something to happen. The same goes for music. The kind of music that resembles the flow of nature is called pungryu, which used to be enjoyed by gentlemen in their quarters or at a gazebo surrounded by nature. Today we’ll listen to danso solo piece “Cheongseonggok청성곡” performed by Lee Doo-won.

This danso piece feels like a breath of clear wind blowing through the pine forest. The original title of “Cheongseonggok” used to be “Cheongseong Jajihanip청성 자진한잎.” Here the term “cheongseong” means a high note and “jajinhanip” a gagok가곡 piece. Gagok is a genre which puts a tune to a poem. This gagok piece is titled “Pyeollak Namudo편락 나무도,” which means that a poem that starts with the letters “namudo” is set to a pyeollak melody. This male solo piece describes how lost a man feels after breaking up with his loved one. The song compares the sense of loss to a pheasant chased by a hawk, a fully loaded ship tossed around in a storm and then being chased by a pirate ship. You can imagine how hopeless and frantic this person must have felt. This gagok piece has a relatively faster beat than other gagok songs and is sung in higher notes, aptly communicating the pheasant’s desperation and the sailor’s terrifying plight. Here’s Lee Dong-gyu singing “Namudo.”

Pungryu music is a little different from folk music, the music enjoyed by the common people. What differentiates folk music from pungryu is that folk music is very emotional. People sing mournful folk songs when they are sad and loud ones when they’re excited. In contrast, pungryu music veils human emotions instead of expressing them candidly. Sadness should not overwhelm a person to the point of being emotionally devastated, and happiness should not make a person reckless. The key to pungryu music is to be moderately expressive – not too sad and not too happy, everything in moderation. This characteristic would make pungryu music rather boring and bland. But once you immerse yourself in the music, you would end up feeling peaceful and your excitement toned down. That’s the charm of pungryu music. Coming up next is a folk pungryu piece titled “Gyemyeongarak Dodeuri계면가락도드리.” Folk pungryu refers to the pungryu pieces performed by folk musicians. When folk musicians play pungryu music, they tend to play the pieces in a more elaborate and emotional manner, Today’s folk pungryu piece is played by gayageum musician Lee Seul-ki.