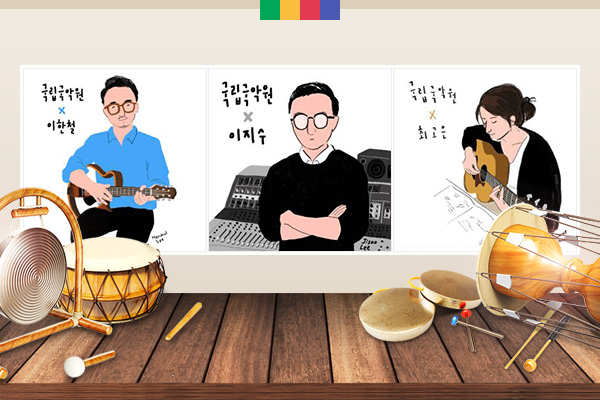 With time, societies tend to change and so do people’s lives and cultural characteristics. Traditional heritages are precious assets that have held together a people and their communities for a long period of time. In modern times, however, we find it hard to preserve cultural traditions in our lives. For instance, let’s take Jongmyo종묘 ceremonial music, a UNESCO-inscribed intangible heritage of Korea. It was performed when Joseon-era kings presided over memorial services for their royal ancestors. The music thus embodied tremendous cultural significance. But these days such meanings are nearly lost to ordinary Koreans. Also, many of the folksongs common people used to sing while planting rice or traditional customs rural villages used to practice have disappeared during the course of Korea’s rapid industrialization. Such sad phenomena prompted the keepers of traditional culture to document the vanishing heritages or find ways to preserve and integrate them into our modern society. One such project is the annual Living Music Series created by the National Gugak Center. This project is spearheaded by young gugak artists who write modern versions of traditional songs for everyone’s enjoyment. We plan to listen to a few tracks from the series today. The first song for this week’s episode is “Dalgeori달거리,” a japga잡가sung mostly by the singers from the Seoul and Gyeonggi areas. Today’s version is sung by Lee Han-cheol.

Unlike folksongs that anybody can sing and enjoy, japga songs were performed mostly by professional singers for an audience. The original version of “Dalgeori” was accompanied by only a janggu장구, the double-sided drum, and was written in old Korean, which is hard for today’s people to understand. There are verses that go “Friends who shared a bed” and “You are my sky and my earth,” suggesting that the song is about love. It isn’t easy for modern Koreans to listen to these words and understand their meanings, so today’s “Dalgeori” rendition had lyrics that were easier to grasp. For instance, the phrase that went “My friend who shared my bed, you are my sky and my earth” was changed to “Your silky skin and your cozy warmth became a blanket embracing me.”

Next up is an instrumental piece inspired by “Suyangsanga수양산가,” a song about everyday life enjoyed in natural surroundings. Here’s “Suyangsanga” written by Lee Ji-su.

“Suyangsanga” is one of twelve major gasa pieces. Gasa song were enjoyed mainly by the members of the upper class, who had the financial means to invite professional singers for entertainment. Since gasa songs were largely for the elites, they were rather slow in tempo and sung about the lofty goals of scholars or how to appreciate nature. “Suyangsanga” starts with a reference to the tale of Chinese brothers who went into self-imposed exile at Suyangsan Mountain and starved to death. While citing several ancient Chinese figures, the song still highlights the joy of rural life. The instrumental version of “Suyangsanga” took only the original song’s vibe and turned it into a piece for the traditional string instrument of yanggeum양금. You probably heard the clear metallic sound of the yanggeum, which literally means a string instrument from the West.

The final song for this episode of Sounds of Korea is titled “Metamorphosis.” It likens a person’s effort to break out of one’s shell and make a leap toward his goal to the insect’s transformation from egg to larva to pupa and finally to adult. It wasn’t inspired by a traditional aria, but a Gyeonggi folk singer adds a sprightly touch to the song. Let’s listen to “Metamorphosis” written by Choi Go-eun and sung by Chae Su-hyun.