Unification Plan for One National Community in 1989 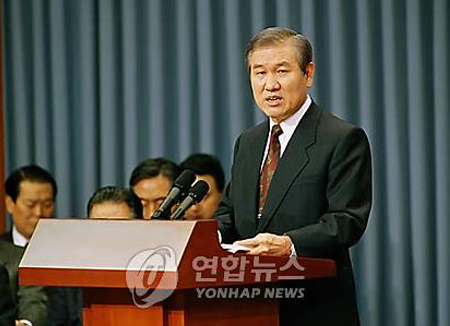 Last month, North Korean leader Kim Jong-un expressed his commitment to the denuclearization of the Korean Peninsula at the North Korea-China summit in Beijing during his first overseas trip since he took power. At the summit, the North Korean leader stressed that achieving denuclearization was the dying wish of his predecessor. As a matter of fact, denuclearizing the Korean Peninsula had been agreed upon by South and North Korea in the 20th century, based on the vision for co-existence. Today, we’ll look back on a unification formula that was announced in 1989.

On the first day of the regular parliamentary session that autumn, then-National Assembly Speaker Kim Jae-soon asked the vice speaker and representatives of four parties to come to his room at around 1:15 p.m., before the new plan was submitted to parliament at 2 p.m. He told me to briefly explain the plan within ten minutes. As one of the architects who had worked on the plan for nearly two years, I summarized it immediately. Mr. Kim asked the party representatives one by one if they agreed on the plan. As the representatives from the ruling and opposition parties all said yes, he confirmed that the plan was fully agreed upon. When the door was open, dozens of reporters waiting outside entered the room and took photos. This is one of the pictures. See? That was almost 30 years ago.

You just heard from former Prime Minister Lee Hong-koo. He points to a photo that was taken on September 11, 1989, when the 13th National Assembly opened its session. Numerous reporters captured the historic moment when lawmakers agreed on a new formula for unification called the “Unification Plan for One National Community.” Then-unification minister Lee explained the Roh Tae-woo government’s unification plan to the heads of four political parties. Thanks to a bipartisan agreement, the new plan was announced at the National Assembly.

…Dear National Assembly members, right here on October 4 last year, I promised to present a feasible plan for peaceful unification to respect Korean people’s wishes and keep up with the changing international politics. In accordance with the president’s grave duty given by the Constitution, I’m going to announce the Unification Plan for One National Community. Based on the three principles—independence, peace and democracy, the new formula calls for creating the Korean Commonwealth in the transitional stage and realizing a unified democratic republic.

The unification plan announced by then-president Roh Tae-woo was refreshingly shocking, since it stated that South and North Korea would recognize each other’s system and pursue co-existence and common prosperity in the interim stage in the entire process of unification. Mr. Lee continues to explain.

I had been devoted to creating a new unification formula for two years since I started working for the government in 1988. That was the most important task for me. Previously, South and North Korea engaged in a fierce tug-of-war, with both sides insisting on leading the unification process. But under the new plan, two different governments would exist in one community, and South and North Korea would accept this new temporary phase and cooperate until they eventually achieve unification.

The key of the plan is to acknowledge one national community and two separate state systems at the same time. In the three-stage plan, South and North Korea would promote reconciliation and cooperation, arrange a transitional system of the Korean Commonwealth and finally establish a unitary state. The formula presented a new vision of creating a national community to North Korea, which was in a difficult situation due to a system change in Eastern Europe and the subsequent economic crisis. It was considered a progressive and realistic plan that would be appropriate for the post-Cold War era. Mr. Lee recalls that the new formula influenced relations between South and North Korea positively.

We informed North Korea of this plan. There was a major shift in global politics around 1990, as the era of bitter Cold War confrontation between the U.S. and the Soviet Union was over and a new era of peace was coming. In that situation, North Korea seemed to be thinking that Seoul’s new unification plan was not too bad. It offered to participate in inter-Korean prime ministers’ talks. So, Seoul and Pyongyang held talks between their premiers about six times in 1990 and reached a landmark agreement the following year. The two sides agreed to recognize each other and make joint efforts to create one community through cooperation. For that purpose, they promised to organize joint committees in various areas, such as the economy, healthcare and welfare. The result was the 1991 Inter-Korean Basic Agreement. Things were proceeding so well, and the two Koreas even adopted a joint declaration on denuclearization, sharing the same view that a nuclear war should never occur on the Korean Peninsula.

For the first time since national division, the unification plan showed how to improve inter-Korean relations and how to achieve unification in a comprehensive and systematic way. To hold the first inter-Korean prime ministers’ talks, in particular, the two sides held eight preliminary meetings and made working-level contact twice. On September 4, 1990, South and North Korea held their first round of high-level talks.

…It is most urgent that the two sides should improve bilateral relations by recognizing and respecting each other. Based on that, they should co-exist and prosper together with the ultimate goal of unification.

Then-South Korean Prime Minister Kang Young-hoon held talks with his North Korean counterpart Yon Hyong-mook, who arrived in Seoul through the truce village of Panmunjom. During the talks that lasted for four days, Kang proposed that the two sides make a basic agreement on a better relationship, discuss how to promote exchanges and cooperation and how to build political and military trust, and declare inter-Korean non-aggression. In response, the North Korean prime minister showed ways to ease political and military confrontation and suggested that both sides adopt a non-aggression declaration.

…The two sides will halt mutual slander and avoid any political events deepening confrontation. They will remove all legal and institutional frameworks that run counter to national unity and unification.

After that, Seoul and Pyongyang held additional discussions, which led to a positive result. At the fifth round of inter-Korean high-level talks in Seoul on December 13, 1991, then-South Korean Prime Minister Chung Won-sik and North Korean premier Yon Hyong-mook signed the Inter-Korean Basic Agreement, which called for reconciliation, non-aggression, and exchanges and cooperation. In the agreement, South and North Korea specified the official state name of the other side. Previously, Seoul insisted on “exchanges and cooperation first,” while Pyongyang demanded “non-aggression first.” The agreement included both calls, laying the groundwork for peaceful unification. On December 31 that year, South and North Korea adopted a joint declaration on denuclearization, with people on both sides of the border wishing for the peaceful unification of their divided peninsula. Unfortunately, their wish never came true, due to the eruption of speculation about North Korea’s nuclear weapons development. But Mr. Lee says that the unification formula from 1989 still could work today.

In 1989, both ruling and opposition camps in South Korea agreed on the Unification Plan for One National Community. Later, in 2000, then-South Korea President Kim Dae-jung signed the June 15 inter-Korean joint declaration in Pyongyang. A few days after he returned home from North Korea, he invited me to lunch. At the time, he said that we had drafted a unification plan a long time ago and that he talked about it in North Korea. He also said that there was some progress in the plan as the discussion in North Korea went smoothly. Most recently, North Korean leader Kim Jong-un reportedly said that denuclearization was the dying wish of his late father. South and North Korea should hopefully revive the unification momentum together. I believe the two Koreas still have a chance to reinvigorate bilateral cooperation, prevent war and settle lasting peace in the region, and take a big step toward unification.

The 1989 unification plan provided a foundation for the June 15 inter-Korean joint declaration, which served as a major turning point in inter-Korean relations. If South and North Korea recall the step-by-step formula calling for the recognition of each other’s system and bilateral exchanges and cooperation, they will hopefully be able to pave the way for opening a peaceful era on their peninsula.
Share
Print
List