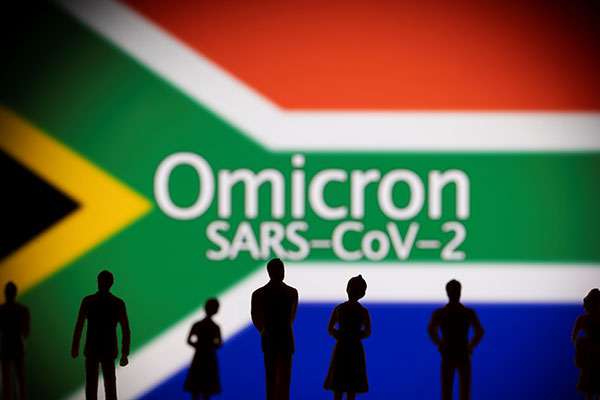 WHO: 'Variant of Concern' out of S. Africa Named Omicron

The World Health Organization(WHO) has recognized a new COVID-19 strain out of southern Africa as a "variant of concern" and named it "Omicron."

The WHO said the variant, initially called B.1.1.529, has a large number of mutations, and preliminary evidence suggests an increased risk of reinfection compared to other variants of concern. It said it will take weeks to understand how the variant may affect diagnostics, therapeutics and vaccines.

Omicron was first identified by South African health authorities in a specimen collected on November 9, which was then reported to the UN health agency on Wednesday.

A growing list of countries have introduced travel restrictions on arrivals from South Africa and its vicinity, including Britain, Russia, the EU, Singapore, Hong Kong and the Philippines.

South Korea’s COVID-19 indicators,meanwhile, painted a troubling picture this week. A new record for the daily caseload was announced on Wednesday at 4,115. There were 52 COVID-linked deaths recorded throughout Friday, raising the fatality rate to zero-point-eight percent. The number of critically ill patients also hit an all-time high of 634, staying in the 600s for the third straight day.

As the government is mulling over changes to quarantine guidelines to implement in order to curb the virus’ spread, President Moon Jae-in is set to chair a special COVID-19 quarantine meeting on Monday.

The meeting will assess the first four weeks of the transition, and inspect and discuss the status of quarantine measures, the medical system and booster shots. Also participating in the meeting will be the prime minister, the head of the KDCA and other Cabinet ministers. It will be followed by a joint briefing.