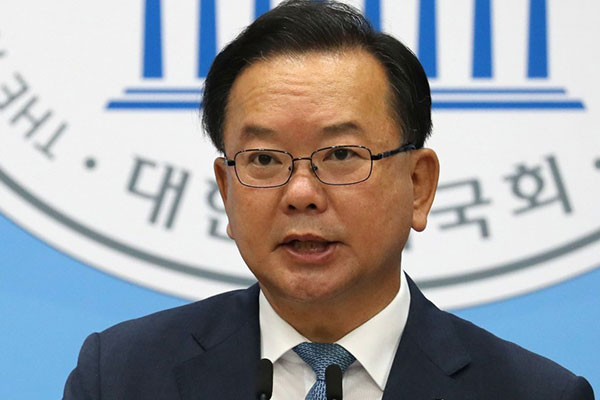 President Moon Jae-in carried out a major reshuffle on Friday, replacing his prime minister and five other Cabinet members, as well as key presidential staff. The nominations come in the aftermath of the ruling Democratic Party’s(DP) painful defeat in the by-elections earlier this month.

Presidential chief of staff You Young-min on Friday announced the cabinet reshuffle.

"Nominee Kim has proven his leadership in realizing coexistence and co-prosperity in the social and political scenes while serving four terms as a lawmaker. As a politician of unity, he has devoted himself to overcoming regional divide, achieving social reforms and national unity. As the interior minister, he earned the people's broad support and trust as he strived to guarantee public safety from various disasters and accidents."

The decision comes as Prime Minister Chung Sye-kyun resigned and is widely expected to run in next year's presidential race.

Considered a moderate within the ruling Democratic Party(DP), the nominee in the 2016 general elections won a key district in Daegu, the main opposition People Power Party’s(PPP) traditional stronghold.

"In the latest reshuffle, experts who have personally handled policies were chosen as ministers in order to create new momentum to stably complete the administration's key agenda items and produce results that the people can feel. The administration also hopes to create an opportunity to humbly accept the people's demands as displayed through the recent by-elections... "

Meanwhile, Moon also replaced four of his aides, including presidential senior secretary for political affairs while creating a new staff position to oversee disease control efforts amid the coronavirus pandemic.

All the Cabinet nominees will have to go through a parliamentary confirmation hearing, and the prime minister nominee requires National Assembly approval before a formal appointment.