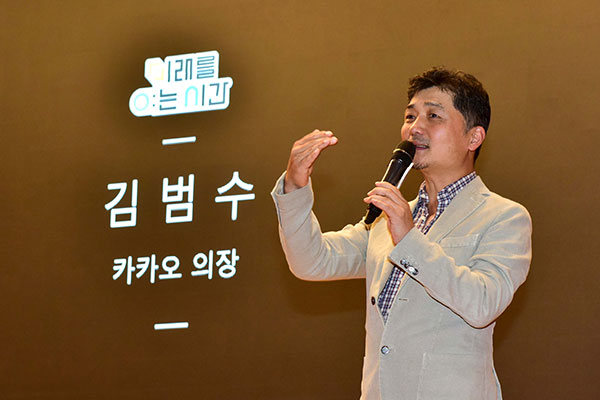 Korea’s antitrust regulator has launched an investigation into local internet giant Kakao Corporation and its founder Kim Beom-su, for allegedly violating the principle of separating industrial and financial capital.

According to industry sources on Monday, the Fair Trade Commission(FTC) last week conducted an on-site inspection at Kakao, as well as Kcubeholdings, shares of which are wholly owned by the Kakao chief.

With a ten-point-59-percent stake in Kakao, Kcubeholdings is considered the internet giant's de facto holding company.

According to Kcubeholdings’ public notice, the former management consulting service company, established in 2007, became a financial investment company as of last year.

This means that Kim, with a personal 13-point-three percent stake in Kakao, in addition to the shares held by Kcubeholdings, holds nearly 24 percent control of the messaging service giant.

The regulator is looking into whether this breaches the nation's fair trade law that limits a financial firm's control over a non-financial company. Kakao is also suspected of omitting or fabricating submitted documents on Kcubeholdings shares owned by Kim's relatives.

After wrapping up its investigation, the FTC is expected to decide on sanctions against Kakao and Kim within the year.

A day after the FTC announced the investigation, Kakao Corporation pledged to create a 300 billion won fund to assist its subcontractors and small businesses.

Kakao announced the so-called “coexistence plan” following a meeting of representatives of its major affiliates on Tuesday. Kakao, South Korea's largest mobile technology company, started out as a messenger app service provider and steadily expanded its operations into shopping, mobility, contents and finance.

Under the plan, Kcubeholdings will transform itself into a social enterprise, focusing on funding social programs such as education and climate change.

Kakao Mobility, the affiliate most involved in Kakao’s business expansion schemes, also plans to shut down some of its operations in the service sector, such as flower, snack and salad delivery services.