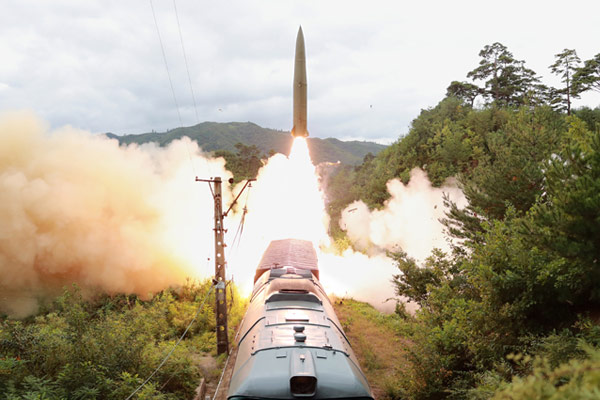 North Korea said on Monday that it carried out successful long-range cruise missile tests over the weekend.

The North's official Korean Central News Agency(KCNA) said on Monday that the country successfully test-fired a new type of long-range cruise missile on Saturday and Sunday.

The state-run mouthpiece said the missiles flew 15-hundred kilometers for about two hours before hitting their targets and falling into the country's territorial waters in the tests conducted by the Academy of National Defense Science.

The report claimed the development of the missiles provides strategic significance as it shows another effective deterrence that more reliably guarantees national security and strongly contains the military maneuvers of hostile forces.

The latest launches were reportedly led by senior officials including Pak Jong-chon, member of the Presidium of the ruling Workers' Party. North Korean leader Kim Jong-un did not oversee the tests.

Following the launches, U.S. special envoy for North Korea Sung Kim on Tuesday said Washington will provide humanitarian aid to the North regardless of progress in denuclearization efforts.

Kim made the remark at a news conference in Tokyo after talks with South Korea’s top nuclear negotiator, Noh Kyu-duk.

He said Washington is ready to cooperate and supports aid for the North’s most vulnerable, provided that the communist nation meets international standards on accessibility and monitoring. Kim added that Washington will also support certain inter-Korean humanitarian cooperation projects.

The special representative also expressed hope that cooperation will resume on unearthing the remains of U.S. soldiers who went missing during the Korean War. He said the U.S. is open to seeking ways to enhance mutual trust.

Earlier in an introductory remark at a meeting with his South Korean and Japanese counterparts, Kim said the U.S. has no hostile intent toward the North, adding he hopes it will positively respond to the U.S.’ various proposals on engaging in dialogue.

He was quick to add, however, that until the North responds to these overtures, the U.S. will sternly implement UN Security Council sanctions.

On Thursday, North Korea's state media reported that the previous day's missile test was conducted by a railway-borne missile regiment.

The Korean Central News Agency(KCNA) said that the newly organized railway-borne missile regiment took part in a drill with the mission to strike a target area in the East Sea 800 kilometers away from its location.

It added that the missiles accurately hit the target in the drill guided by Pak Jong-chon, member of the Presidium of the politburo of the ruling Workers' Party. North Korean leader Kim Jong-un did not attend.

The report said the railway-borne missile regiment was created to enhance capabilities to deal a multi-concurrent blow to threat-posing forces and to respond to various threats more effectively.