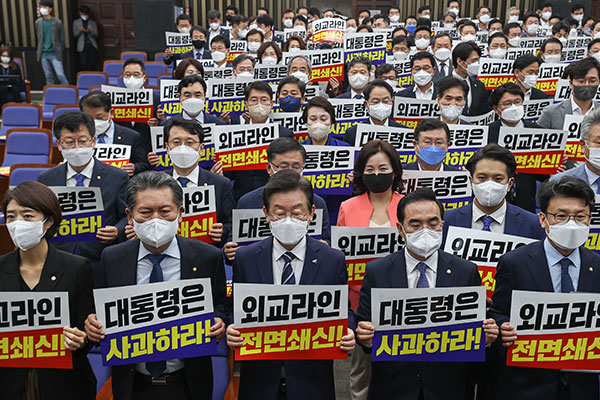 The National Assembly on Thursday passed a motion calling for the dismissal of Foreign Minister Park Jin.

The Assembly, dominated by the main opposition Democratic Party(DP), held a plenary session and passed the motion in a vote of 168 to one with one abstention. The DP holds 169 out of a total 299 seats in parliament, while the ruling People Power Party has 115.

The DP on Tuesday decided to table the no-confidence motion, calling on President Yoon Suk Yeol to dismiss his foreign minister over diplomatic gaffes during Yoon's overseas trip last week.

Still, the motion is not legally binding and may be cast aside by the president.

The lawmakers of the ruling People Power Party left the chamber in protest when the motion was put to a vote. The minor Justice Party lawmakers did not participate in the vote either in line with a party decision.

Speaking a day after the motion was carried, Foreign minister Park said he cannot agree with the opposition camp’s view that Yoon’s latest overseas trip was a “diplomatic catastrophe.”

Park made the remark to reporters on Friday at the foreign ministry office in Seoul.

The minister said he believes South Korea should be solely responsible for upholding its national interests and dignity. He will therefore regard the DP’s vote as a reprimand, urging him to better serve the nation on the diplomatic stage.

Stressing that now is the time to consider national interests instead of engaging in political wrangling, Park reiterated his pledge of the previous day to make every effort as head of the foreign ministry.

The DP said it filed the motion, which is not legally binding and may be disregarded by the president, to hold someone responsible for diplomatic gaffes during President Yoon's overseas trip last week.

Among other criticisms, the DP claimed Yoon insulted U.S. politicians with a hot mic comment and failed to hold substantive summits with the leaders of Japan and the U.S.