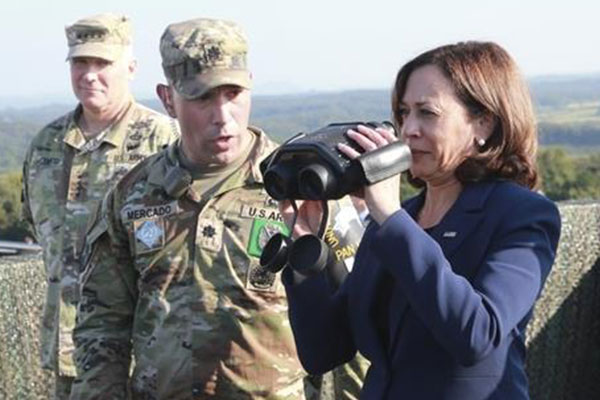 U.S. Vice President Kamala Harris visited South Korea on Thursday. Touring the heavily fortified inter-Korean border facing nuclear-armed North Korea, Harris issued a warning against the regime, saying that the U.S. will do "everything in our power" to ensure its security commitment to South Korea. She also sat down with President Yoon Suk Yeol and discussed key pending issues, including the effect of the Inflation Reduction Act on Korean automakers.

Standing only a few kilometers from the northern side of the military buffer zone, Harris issued a warning to Pyongyang.

“I cannot state enough that the commitment of the U.S. to the defense of the Republic of Korea is ironclad... Over the past seven decades, it has been clear. In the South, we see a thriving democracy. Innovation, economic prosperity and strength. A powerhouse, dare I say, on many of these issues and a force for good in the world. In the North, we see a brutal dictatorship, rampant human rights violations, and an unlawful weapons program that threatens peace and stability."

Just a day before Harris' arrival, North Korea fired two short-range ballistic missiles into the East Sea, where a strike group led by the nuclear-powered supercarrier USS Ronald Reagan is staging a massive joint exercise with the South Korean Navy.

"With regard to the threats posed by the DPRK, as I told President Yoon, we are aligned on this issue. The DPRK has a ballistic missile launch program, apparently including just yesterday, and are destabilizing the peace and security of this region. Our shared goal, the United States and the Republic of Korea, is the complete denuclearization of the Korean Peninsula."

"The South Korea-U.S. alliance is the linchpin that defends the freedom, security and prosperity of the Korean people and I will do my utmost to further strengthen our alliance. I believe that your visit to Korea following President Biden's  visit to Seoul last May, will be another turning point to achieve this goal."

"For seven decades the alliance between the United States and the Republic of Korea has been a linchpin of security and prosperity on the Korean Peninsula and in the Indo-Pacific and throughout the globe. I am here to reinforce the strength of our alliance and strengthen our work together."

The presidential office in Seoul said that Yoon and Harris discussed U.S. President Joe Biden’s Inflation Reduction Act, under which Korea's Hyundai Motor, Kia and other electric vehicles manufactured outside of North America will be excluded from tax incentives for U.S. consumers and lose price competitiveness.

During the meeting that lasted for 85 minutes, Harris is said to have noted that President Biden is well aware of the concerns in South Korea and that Washington will devise ways to resolve the issue while implementing the law.

The two sides also discussed Yoon's possible visit to the U.S. next year, marking the 70th anniversary of the bilateral alliance.

Harris had been in Japan to attend the state funeral of late former Japanese leader Shinzo Abe. South Korea is  the final leg of the American vice president's four-day trip to Asia, during which she sought to reaffirm the U.S. security commitments to its allies in the region.