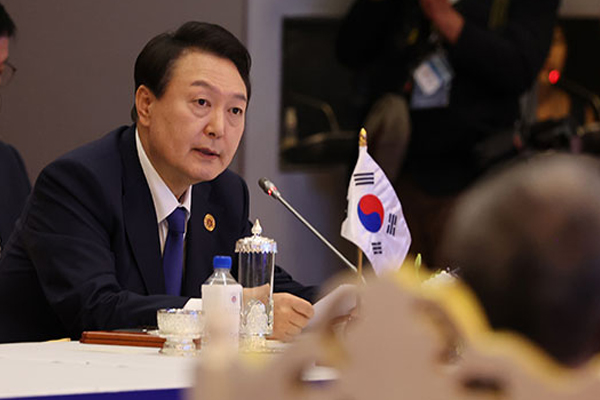 President Yoon Suk Yeol attended the ASEAN Plus Three summit in Phnom Penh, Cambodia on Saturday and stressed that cooperation with the regional bloc is more important than ever.

On the second day of his Southeast Asia tour, Yoon said the current complex crisis must be overcome through solidarity and cooperation.

He said South Korea will actively play its part as this year's chair of the trilateral summit with China and Japan as well as coordinator representing the three countries at the ASEAN Plus Three. Yoon especially voiced hope for the swift reactivation of cooperation mechanisms between Seoul, Beijing and Tokyo, including a three-way summit.

Noting a host of challenges the world faces in human rights, climate change, food and energy security and a prolonged war, Yoon said if the Association of Southeast Asian Nations (ASEAN) and the three East Asian countries respond together, there will be able to work toward global peace and prosperity.

The summit was attended by the leaders of nine ASEAN members as well as Japanese Prime Minister Fumio Kishida and Chinese premier Li Keqiang.