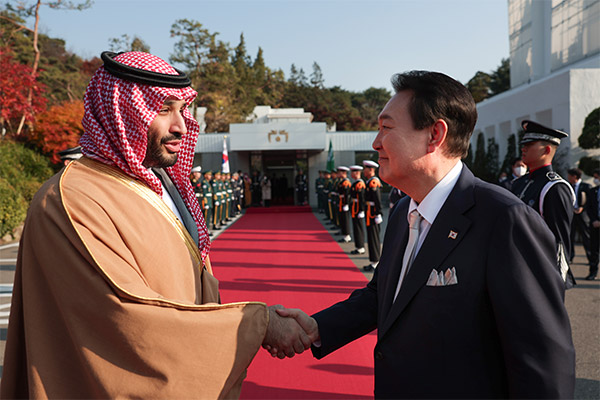 They also agreed to enhance and encourage their nations’ mutual cooperation in multilateral sectors including that of defense and future energy.

The presidential office said Yoon held a meeting with bin Salman at his residence in Hannam-dong, central Seoul, on Thursday and held in-depth discussions and exchanged views on bilateral cooperation, regional issues pertaining to the Korean Peninsula and the Middle East.

Yoon noted that Saudi Arabia is South Korea’s largest trading partner in the Middle East, a key construction associate overseas, and a vital economic and security companion. He said that it is time for their relations to take a leap forward as Saudi Arabia seeks to open a new future through its Vision 2030.

Bin Salman, who also serves as the Saudi prime minister, responded by lauding Korean business contributions to the development of Saudi Arabia's national infrastructure since they established diplomatic relations in 1962.

The crown prince expressed particular hopes to beef up cooperation with Korea in the areas of energy, defense, as well as infrastructure and construction.

NEOM City, a key element of bin Salman’s brainchild Saudi Vision 2030, is a megacity construction project that incorporates smart technology and aims to break away from Saudi Arabia's oil-centered economy, with a mammoth budget of 500 billion U.S. dollars.

Earlier, more than a dozen business agreements were announced at an investment forum set up by Saudi Arabia’s Ministry of Investment and South Korea’s Ministry of Transport, Infrastructure and Energy, valued at a combined 30 billion U.S. dollars.