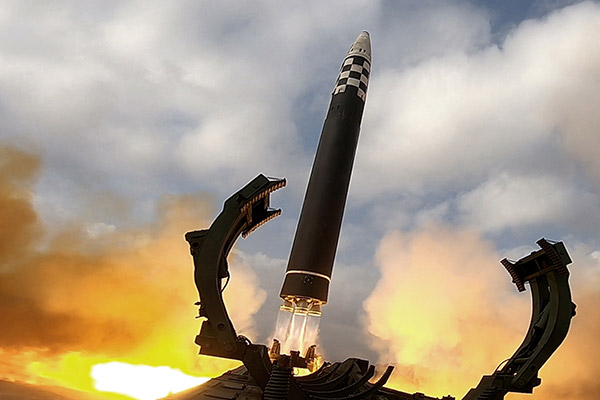 North Korea has fired another intercontinental ballistic missile(ICBM) toward the East Sea, its second this month.

The South Korean Joint Chiefs of Staff said that it detected the launch from the Sunan area in Pyongyang at 10:15 a.m. on Friday.

"The long-range ballistic missile flew around one-thousand kilometers and hit an altitude of six-thousand-100 kilometers at a speed of Mach 22. The South Korean and U.S. intelligence authorities are closely analyzing the details."

The projectile likely fell into waters some 210 kilometers west of an island in northern Hokkaido, within Japan's exclusive economic zone(EEZ).

Adjusting the launch angle for the missile to between 30 to 45 degrees would have extended the flight distance to around 15-thousand kilometers, putting the East Coast of the United States within range.

"The South Korean military will be ready for any additional provocations by the North, closely monitoring the situation in close collaboration with the U.S. and maintain thorough readiness to overwhelmingly respond to any North Korean provocations."

This comes a day after Pyongyang’s foreign minister issued a statement, warning of a "more violent" military action in response to Seoul, Washington and Tokyo's decision to bolster the U.S.' nuclear deterrence capabilities against the North’s threats.

Shortly after the launch, South Korean President Yoon Suk Yeol instructed his National Security Council to follow up with that decision he reached with U.S. President Joe Biden on the sidelines of the ASEAN gatherings in Cambodia last Sunday.

Yoon also told his officials to seek UN Security Council(UNSC) sanctions to deal with the North.

Despite tighter collaboration with the U.S. and Japan, the UNSC remains divided over the North’s mounting aggression.

As Beijing and Moscow claim that the resumption of massive military exercises by the U.S. and South Korea triggered North Korea to respond with missiles, the UN Security Council failed to take any joint action against the North’s Hwasong-17 ICBM launch 15 days ago.

The South Korean military believes that the North this time test launched another Hwasong-17 after its attempt earlier this month failed midair following two stage separations. North Korea has fired off eight ICBMs so far this year.

The Yoon Suk Yeol administration blasted the intercontinental ballistic missile launch on Friday, accusing the regime of augmenting tensions on the Korean Peninsula and in the region.

In a statement, the presidential office strongly condemned the launch as a flagrant violation of UN Security Council resolutions, saying that any activity by Pyongyang related to its nuclear and ballistic programs cannot be justified.

The statement said Seoul has the will and overwhelming capability to immediately retaliate against any threat and warned Pyongyang that it should not make an erroneous judgment.

The government also vowed to work closely with the UN and the international community based on discussions with the U.S. to hold the North accountable for its breach of resolutions, while further strengthening trilateral security cooperation with Washington and Tokyo.

Earlier in the week, Yoon sat down with Chinese President Xi Jinping for the first time on the Indonesian island of Bali on the sidelines of the G20 summit on Tuesday.

Seoul’s presidential office said that during the 25-minute meeting, Yoon called on China, as a permanent member of the UN Security Council, to play a more constructive and active role in containing North Korea in the wake of intensified provocations by the North in recent months.

Xi also stressed the importance of keeping peace on the Korean Peninsula and the wider region, noting it is a matter of mutual interest for China as well as South Korea.

However, differences were on display in their approaches, with the Chinese leader expressing his hope that Seoul would proactively work toward improving inter-Korean relations.