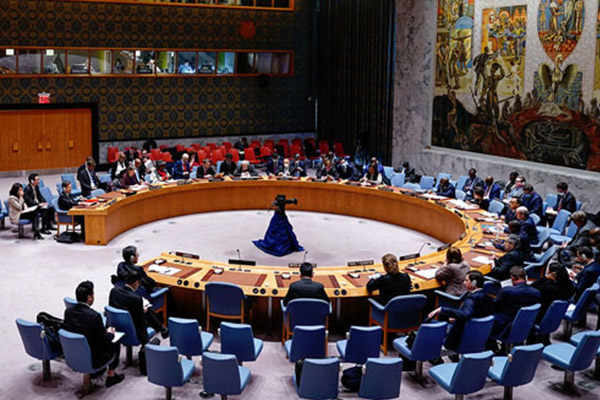 The UN Security Council has again failed to reach consensus on how to address North Korea’s latest launch of an intercontinental ballistic missile(ICBM).

During a session at the UN headquarters in New York, western powers including the U.S. and key European nations as well as South Korea and Japan strongly condemned the North.

China and Russia, however, opposed toughening UN sanctions, repeating their position that the United States is to blame for the North's armed provocations.

Launching the Hwasong-17 intercontinental ballistic missile on Friday, North Korea again sought to prove that the entire United States mainland is in its nuclear striking range.

North Korean state television the following day broadcast theatrically-edited footage of the launch, saying that the weapon armed with the North Korean people's pent-up hatred toward the U.S. will put an end to a history of shame.

The missile landed in waters just about 200 kilometers off Japan's coastline. Adjusting the launch angle to between 30 to 45 degrees would have extended the flight distance to around 15-thousand kilometers.

"It is reportedly the first successful test of the DPRK’s largest and most powerful missile, capable of reaching all of North America.”

The UN Security Council on Monday converged to discuss the North's latest military action, but remained divided on whether to further sanction the regime.

[Linda Thomas-Greenfield - US Permanent Representative to the UN]

"Sixty-three times this year, the DPRK has flagrantly violated Security Council resolutions and attempted to undermine the global nonproliferation regime."

"The further escalation of sanctions against the DPRK, however, already goes beyond measures to counter prohibited missile and nuclear programs and threatens North Korean citizens with unacceptable socioeconomic and humanitarian upheaval."

As China and Russia opposed the U.S.-led campaign to toughen UN sanctions, South Korea's UN ambassador argued that the Kim Jong-un regime is taking advantage of the division within the Council.

“We have witnessed how the DPRK is fully taking advantage of the Council’s inaction and divisions to build up its nuclear arsenal. Since the Security Council failed to adopt a resolution because of the opposition by two permanent members in May, the DPRK has launched 40 ballistic missiles... "

Following the open session, the U.S. ambassador - joined by her peers from 13 other countries - once again read out a joint statement, urging North Korea to "abandon its unlawful weapons programs in a complete, verifiable, and irreversible manner.”

Following North Korea's nuclear test in 2006, the UN Security Council imposed sanctions on the regime and has since toughened them, banning ballistic missile activities. Since May, however, Beijing and Moscow have refused to penalize North Korea any further.

After launching a total of eight ICBMs this year, the North is now poised to conduct its seventh nuclear test.

Experts say North Korea will likely test a miniaturized, lighter nuclear warhead this time that is suitable for cruise missiles.